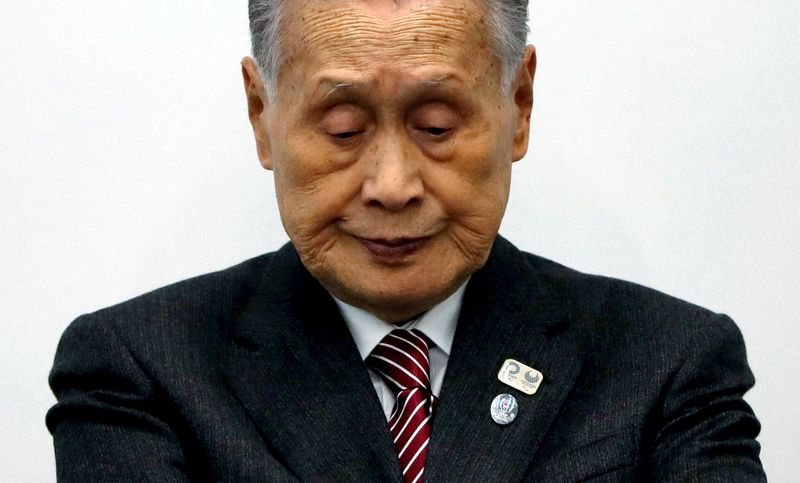 TOKYO (Reuters) – In just a week, the metamorphosis was complete: former Japanese prime minister Yoshiro Mori went from being a political asset seen as vital to the Tokyo Olympics' success to a liability threatening the already cloudy outlook for the Summer Games.

Mori, 83, is set to resign on Friday as head of the Tokyo 2020 organising committee after an apology for sexist comments failed to quell domestic and overseas outrage.

The groundswell of criticism from athletes, sponsors, volunteers, diplomats, media and ordinary Japanese pierced what one newspaper described as the "village mentality" of Mori's allies, including Prime Minister Yoshihide Suga, who had hoped an apology would put the controversy to rest.

"His colleagues sought to protect him, and if the criticism had only been in Japan, an apology might have worked," said independent political analyst Atsuo Ito. "But the reaction was global."

The resignation of such a powerful figure signals Japanese leaders' determination to do whatever it takes to stage the Games, despite persistent concerns about the COVID-19 pandemic.

"The hope is that Japan gets it, that the powers that be are not rigid and tone deaf and that yes, Japan will do what it takes," for a successful Games, said Jesper Koll, senior adviser to asset manager WisdomTree Investments (NASDAQ:WETF).

But Suga's handling of the affair could further dent his already battered public support, as was Mori's attempt to pick outspoken former Japan Football Association president Saburo Kawabuchi, 84, to succeed him.

At a Japanese Olympic Committee meeting on Feb. 3, Mori commented that women talk too much, causing discussions to drag on. He first apologised, but initially declined to resign and said he "didn't listen to women that much lately."

'DON'T REALLY GET IT'

Despite the outrage over his remarks, Olympic and ruling party officials initially told Reuters that few were willing to oust Mori, whose network of politicians and Olympic officials was thought key to pulling off a successful Games.

Suga has dubbed Mori’s comments unacceptable and said they were not desirable for Japan’s national interests, but did not call for his resignation.

"I don't think they (ruling politicians) really get the issue about gender, its significance. Gender equality is very important but they take the issue lightly and just focus on internal politics," said Machiko Osawa, a professor at Tokyo Women's University.

Overseas media kept up prominent coverage of the controversy and foreign diplomats posted support for gender equality on social media.

Twitter was alight with domestic and foreign criticism – tennis star Naomi Osaka called his remarks "ignorant" – and an online petition calling for action against Mori garnered more than 140,000 signatures.

On Wednesday, Tokyo Governor Yuriko Koike said she would not join a meeting of organisers with Mori because it would not send a “positive message”, and a day earlier the International Olympic Committee issued a statement condemning Mori's remarks.

Mori's handpicked successor, Kawabuchi – already derided as "another grandpa" by some on social media – decided to decline the post, the Asahi newspaper reported on Friday.

His selection had threatened to keep alive the controversy as Japan's deeply entrenched gender bias clashes with changing attitudes. Japan ranked 121st out of 153 countries in the World Economic Forum's 2020 gender gap report.

"They share the same values, I think that's why he was chosen," Osawa said of Kawabuchi and Mori. "It's not just what he says, it's the decision process. Women's opinions should be more highly regarded."