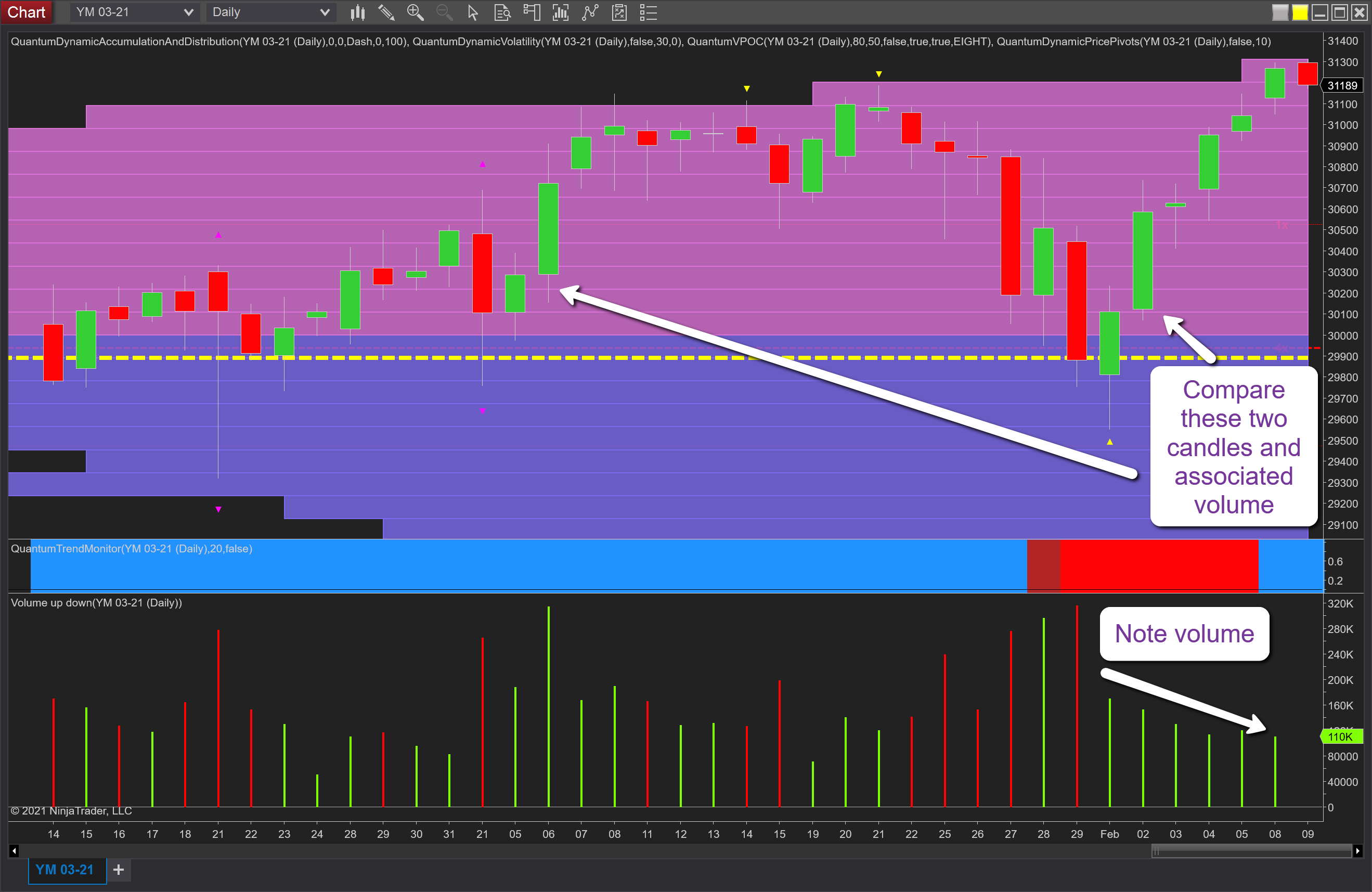 Thus far, February has been an interesting month for both traders and investors, and regardless of whether you are an intraday speculator or longer-term investor, it pays to keep an eye on the daily chart for a medium/longer term perspective. I would like to focus on the YM e-mini – the futures contract for the Dow Jones. A striking feature of this chart is that since the start of the month there have been several anomalies with respect to the volume and price action.

First, we have a market that is rising on falling volume, which suggests a market that is running out of momentum. As such, we can expect to see a congestion phase develop and perhaps followed by a correction similar to what we saw in late January.

Second, note the volume associated with the widespread up candle marked on the chart. Compare this to others of similar size and their associated volume, and it’s clear that here, too, we have an anomaly as we would expect to see much higher volume associated with such a dramatic candle. So there are two strong technical reasons to expect a pause in the current bullish trend.

However, we also need to read the chart in the context of any action the Fed may take in response to the virus. Last Friday’s poor as well as signs that inflation is, in fact, lurking in the background, which may force the Fed into a rethink of its monetary policy. The evidence for inflation is threefold. First, there are strongly bullish charts for soft commodities. Second, the Fed’s own preferred measure of inflation, namely the PCE (personal consumption expenditures) index is ticking higher. And, although it is still below the 2% target, it is something that needs watching. However, there is criticism of the Fed for being focused on the PCE as the index excludes food and energy costs, which have a more direct impact on consumers. Finally, the bond market and yields have been rising. So if inflation does indeed appear later in the year as measured by the PCE and rising yields, this may well lead the Fed to consider raising interest rates. This will strengthen the U.S. dollar, which, in turn, is likely to see U.S. equity markets weaken as a result.

For the time being, the status quo remains firmly in place with further stimulus likely to be the order of the day, which is supportive of a longer-term bullish trend for equities but one that is punctuated with corrections and pullbacks.