The finished within a whisper of 4,200 for the seventh session in a row. That leaves a lot of people asking if this key level is acting as support or resistance?

Aside from two dips in early May, the index has been stuck on 4,200 since mid-April. That’s a month and a half of almost zero headway in either direction, equally frustrating both bulls and bears.

While holding near the highs is almost always a good sign, there comes a point when resilience starts looking more like stalling. Have we reached that tipping point? Not yet…but it is approaching quickly.

As is normally the case, there are two ways this plays out—either prices continue higher or they stall and reverse.

In these cases, we always give the benefit of doubt to the trend. This is a bull market and that means 9 times out of 10, these things resolve to the upside. If a person likes betting on the higher probability outcome, they are trading this from the long side.

While holding here covers the long side, there is still that 1 out of 10. That’s what our stops are for. Pick a level where you will admit defeat and pull the plug. If the market stays above this level, keep holding. If it slips under, get out and try again next time.

Personally, I like keeping my stops nearby. That allows me to get out early and be in the best position possible to buy the next bounce. But a nearby stop also increases the likelihood of a false alarm. Fortunately, there is an easy fix for that too. As soon as I get out, I’m already looking for the next entry point, even if it comes a few hours later.

Most likely this consolidation will resolve to the upside. But if it dips and forces us out, be on the lookout for the next buyable bounce. And despite what the cynics claim, the least likely outcome is the demise of this bull market. They’ve been wrong for 12 months and they are most likely wrong here too. 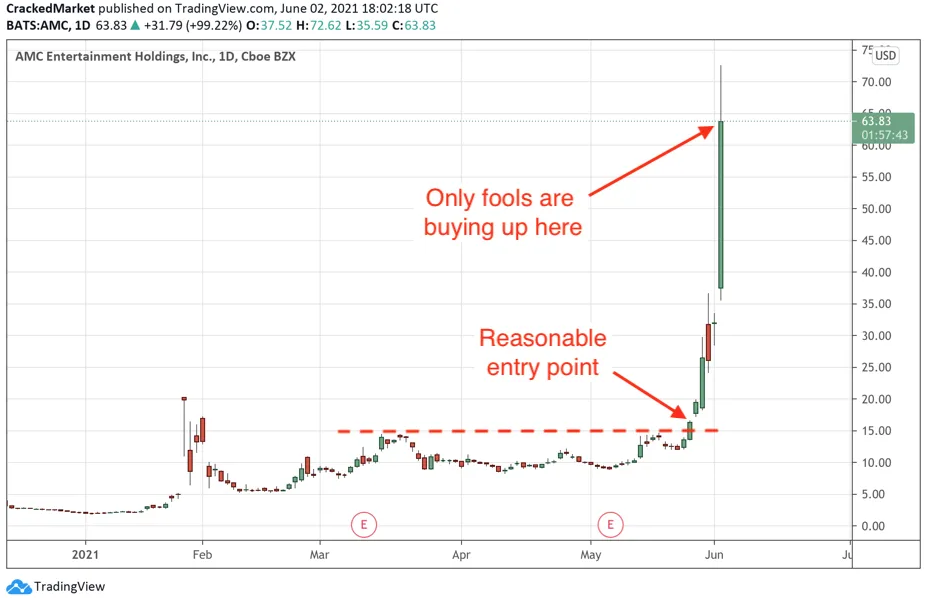 Yesterday I said AMC Entertainment Holdings’ (NYSE:) latest breakout was buyable and a few hours later the stock doubles. While I’d love to say I predicted this, I doubt anyone who has been doing this for a while would be bold enough to predict a 100% move over a few short hours.

That said, this had all the right ingredients, namely a stupid following that is prone to getting even stupider.

While holding these irrational moves is great, don’t fall for the hype. This is a trade, not an investment.

Stay near the exits and be ready to lock in some heady profits as soon as the cracks start showing. Those that get greedy and hold too long will end up giving everything back and then some.