The past few weeks have been exciting for Microsoft (NASDAQ:) investors. The global technology giant has been busy using its massive pile of cash to position itself for future growth, at a time when the pandemic-driven rally in tech stocks is showing signs of peaking.

The Redmond, Washington-based software behemoth’s latest moves prove that the company is an ideal pick for long-term investors looking for both capital growth and an increasing income stream from the company’s dividend which currently yields 0.95%.

After buying the parent company of the popular video-game publisher Bethesda Softworks earlier this year, Microsoft is reportedly in exclusive talks to acquire messaging platform Discord Inc. for $10 billion or more.

Purchasing the six-year-old startup will help Microsoft boost its video game business which includes the successful Xbox platform, and its social-networking footprint. If concluded successfully, the Discord deal would be Microsoft’s largest acquisition since its $26.6 billion purchase of LinkedIn in 2016.

With this acquisition activity, the company is also as a major government supplier. The company told investors in a blog post on Wednesday that it will build custom augmented-reality headsets for the U.S. Army in a deal that could be worth up to $22 billion.

The devices will be based on Microsoft’s HoloLens headset which debuted in 2016. More than 120,000 units of the custom gear will be delivered over a 10-year period, supported by Microsoft’s Azure cloud-computing service.

The “Netflix of Gaming”

As a result of Microsoft’s growth-oriented moves, analysts are forecasting additional gains for its share price after a more than 35% surge in 2020. 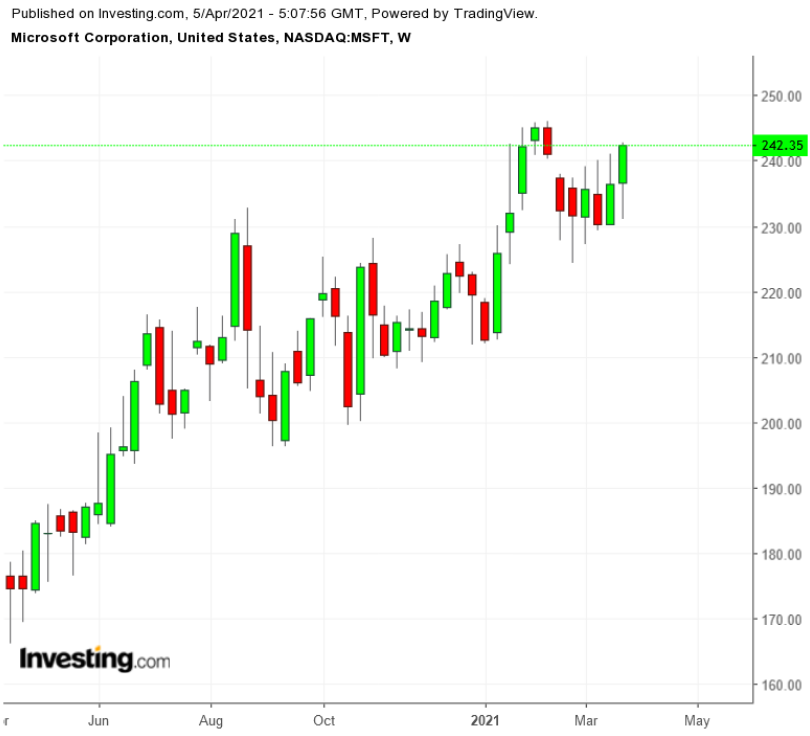 All 23 analysts covering Microsoft have a buy rating on the stock, according to Tipranks. Their consensus, one-year price target is $279, a 15% boost from its Thursday close of $242.35.

In a note to investors last week, Morgan Stanley assigned an “overweight” rating to MSFT with a price target of $290 a share.

According to the note, Microsoft’s recent push to strengthen its community and content portfolios position the company to enable it to take a major share of the gaming market. With some 18 million monthly subscribers to its Game Pass service, Microsoft is on the way to becoming the “Netflix of gaming,” the note said.

Microsoft’s gaming expansion comes after a strong year which produced stellar growth for its Azure internet-based cloud computing services. in that division jumped 50% in the most recent quarter as corporate clients accelerated a shift to the cloud during the pandemic, where they can store data and run applications via the internet. For more than three years running, revenue from Azure has almost doubled each quarter.

MSFT is continuing to expand its market share, reaching more deeply into cloud and gaming. At the same time it’s maintaining its leading position with legacy software products such as Windows and Office.

This durable advantage will help the company achieve sustained, double-digit growth in revenue, earnings per share and free cash flow, making it a reliable tech stock to own now and over the longer term.