Intel (NASDAQ:INTC), the world’s largest chip-maker, has produced a remarkable turnaround this year. As investors rushed to buy stocks they believed offered great value during the economic turnaround, Intel became one of the five top gainers on the Dow Jones Industrial Average.

The chip-maker’s impressive performance comes after a dismal 2020, when its shares fell about 20%, failing to take part in a powerful rally that pushed the values of many chip stocks to the roof. It was a period when the Californian-based company lost its investment appeal as smaller competitors gained ground and its factories failed to bring the latest and fastest chips to the market.

These consistent setbacks, viewed by some as a sign that the company’s 50-year old strategy, which had consisted of designing and manufacturing its own semiconductors, doesn’t work any more.

Its competitors, including Advanced Micro Devices (NASDAQ:AMD) and NVIDIA (NASDAQ:NVDA), design chips that are built by outsiders, led by Taiwan Semiconductor Manufacturing (NYSE:TSM).

So, what has changed this year that is prompting investors to bet on this struggling giant?

Before we discuss Intel’s own growth prospects, it’s important to note that the global rotation into value shares and out of growth stocks has a big role to play here.

Investors are buying stocks, like Intel, Exxon Mobil (NYSE:XOM) and Walgreens Boots Alliance (NASDAQ:WBA), as the rise in bond yields offers a signal that the U.S. economy is gaining momentum, making cyclical shares cheaper, as they are considered to be more closely exposed to the economic recovery and therefore more attractive. 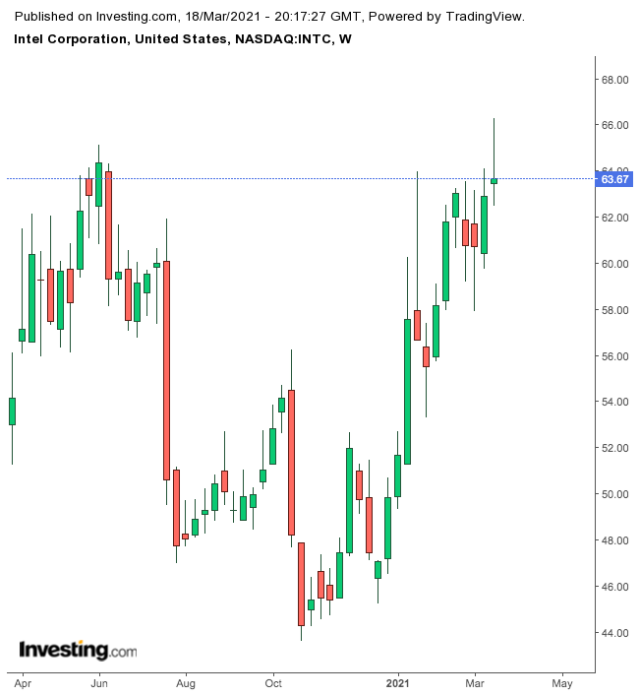 Turning to Intel’s earnings performance in recent quarters, it’s quite clear that the company is struggling to bring the latest and the fastest chips to the market. While revenue rose 8% in the past fiscal year, they rose just 1.6% in 2019. Sales are projected to decline 10% in this fiscal year.

Despite the external pressure to outsource the chip manufacturing, Intel’s new CEO Pat Gelsinger said in January that the company plans to stick to its integrated device manufacturer model and will keep building most of the company’s chips in-house.

“We work to close any gaps with external foundries as well as keep ahead,” Gelsinger said in the latest earnings call.

“And clearly, we’re not interested in just closing gaps. We’re interested in resuming that position of the unquestioned leader in process technology.”

Some analysts see a logic in this approach and have turned bullish on Intel growth prospects this year. Needham analyst Quinn Bolton is one of them. This is what he said in a recent note:

JP Morgan analyst Harlan Sur, who reiterated a buy rating on Intel in January, with a price target of $70 a share, believes that Gelsinger’s track record at VMware (NYSE:VMW), and his instrumental roles as Intel’s chief technology officer provides the right background to navigate the company through what is arguably one of the most challenging periods of the company’s existence.

For long-term investors who wanted to take advantage of Intel stock’s weakness, the best time to make that trade is behind us. Intel stock has gained more than 30% this year on rotation trade, analysts’ bullish view on the management change and strong demand for its high-margin products, including its most advanced processors for data centers. That major upswing, in our view, has run its course and investors are better off to wait for the clear sign of a turnaround.