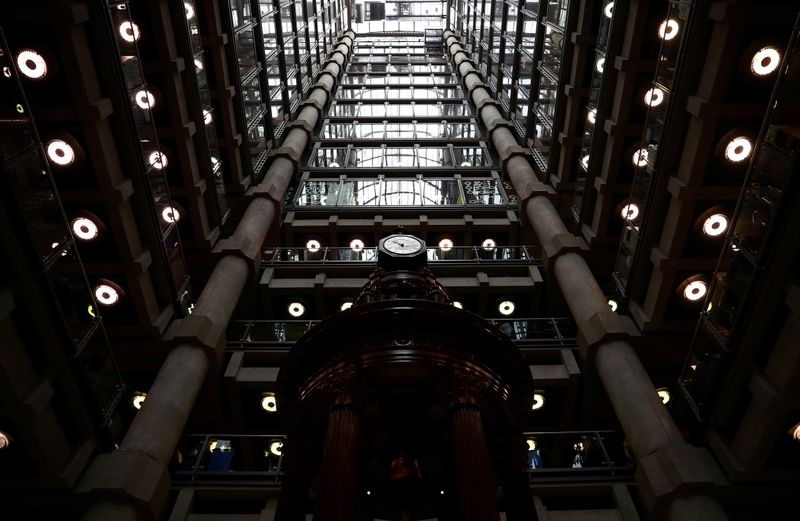 © Reuters. FILE PHOTO: Interior of the Lloyd's of London building is seen in the City of London financial district 2/2

LONDON (Reuters) – A record rebound in merger activity this year and a rise in litigation has brought with it an upsurge in insurance policies that give companies and private equity firms cover for when a deal goes wrong, industry officials say.

Keen for revenue after a year marked by payouts for event cancellations and shuttered businesses, insurers are tapping into the appetite of deal-seeking firms to protect themselves should the businesses they want to buy misrepresent their accounts.

For the sellers, insurance can help to guarantee a clean exit from any deal.

M&A protection can also remove a company's need to set money aside for potential disputes and help them to avoid costly and lengthy litigation.

As a result, a spate of insurers has entered the market, with around 30 crowding in in Europe alone, broker Paragon said. Despite the rising level of claims, the entrants have pushed down premiums, but that could be temporary.

"In 2008, you could have probably sat the whole of the London M&A insurance community round a meeting room table," said Adrian Furlonge, partner at M&A insurance broker Helmsley Wynne Furlonge. "Now there are more than 300 people in that market."

Mark Fellows, head of financial lines at Aviva (LON:AV), said the British insurer entered the sector in 2019, and M&A was becoming an established class of insurance.

The most common M&A protection in Europe is warranty and indemnity (W&I) insurance, to cover the warranties and indemnities provided in a deal's sale and purchase agreement.

The buyer would take out insurance against any company information in those warranties – such as financial statements – being inaccurate.

The seller, which in many cases may be a private equity firm, would buy insurance instead of holding money in an escrow account in the event of a dispute.

Brokers said the sector, while small, had seen growth that continued this year, although companies have yet to give full-year figures for 2020.

Lloyd's of London pointed to W&I insurance as one of the main contributors to increased premiums in 2019 and law firm CMS said 19% of the European M&A deals on which it advised last year used W&I insurance.

The expense is small compared with the cost in money and time when a deal goes wrong, a marked tendency as COVID-19 has led to claims of misleading valuations and broken business models.

Among high-profile deals leading to court battles, U.S. software giant Hewlett-Packard (HP (NYSE:HPQ)) is suing Autonomy founder Mike Lynch along with his former finance chief Sushovan Hussain for more than $5 billion, alleging they inflated the value of the British data firm before selling it in 2011.

It has evolved for larger deals – up to $10 billion is not unusual, brokers say – and listed companies are also using it.

LSE said at the time of the deal announcement that it bought insurance providing $1.2 billion in cover from a group of insurers. Refinitiv is 45%-owned by Reuters' parent Thomson Reuters (NYSE:TRI).

Swan at McGill said the broker was fielding enquiries about M&A insurance from executives setting up special purpose acquisition companies, blank-check deal-hunters that have become the darling of the U.S. stock market this year.

The second quarter was barren for deals as the pandemic caused lockdowns around the world.

But the third quarter hit a record $1 trillion. And Furlonge said November had been the six-year-old broking firm's busiest yet.

Companies generally insure around 10% of the transaction value of the deal. The premium is around 1% of the sum insured, with premiums having fallen 50% in the last two-to-three years, brokers said.

So for a $10 billion deal, policyholders might insure $1 billion at a cost of $10 million.

Nineteen percent of material claims made against AIG (NYSE:AIG) M&A policies in 2019 totalled more than $10 million, compared with 8% in 2017, the insurer said, with the increase partly down to greater use of the insurance for large deals.

Allianz (DE:ALVG) and Canopius, which operates in the Lloyd's of London market, are among a handful of insurers to have withdrawn from the sector, sources say.

Allianz was no longer backing an underwriter offering M&A insurance in North America, it said in an emailed statement, though it remained involved in Europe and Asia. All parts of its underwriting book had to meet "optimal portfolio performance criteria", the insurer said.

More insurers may withdraw in January, the traditional season for policy renewal, because of rising claims exposure, brokers said, which could drive premium increases of 10% or more.

"That's where we see a bit of a correction coming," he said.