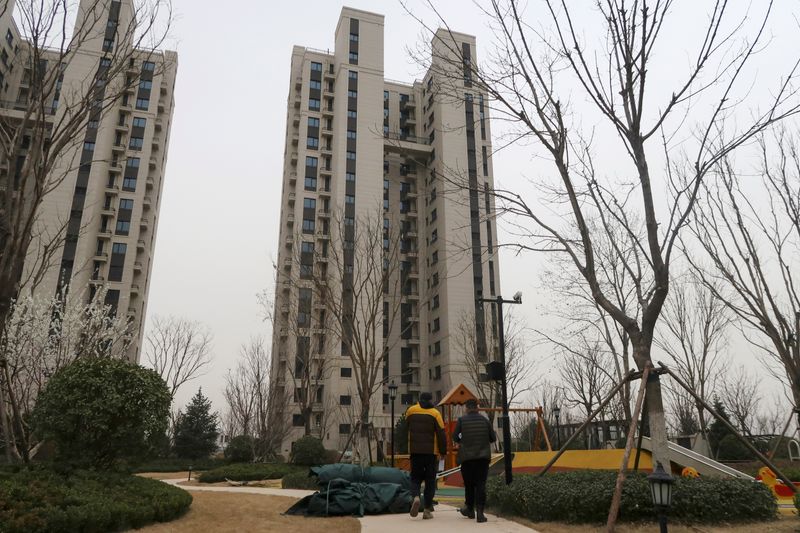 By Lusha Zhang and Ryan Woo

ZHUOZHOU, China (Reuters) – In Zhuozhou, a small city in China’s north, Zhu has stopped making mortgage payments on her apartment after its developer did not build a promised rail line that would have allowed residents to commute to Beijing for work.

The accountant is one of some 1,000 home owners in the housing project who ceased payments in anger last year, according to Zhu and two other buyers campaigning for compensation who spoke with Reuters.

“I didn’t do anything wrong, so why do I have to bear all the consequences?” said Zhu.

In the picturesque city of Dali in the southwest, Li, a small business owner, is still waiting to move into an apartment that was meant to be handed over more than two years ago.

“The developer has postponed delivery four times since the end of 2018. We have completely lost trust in them,” said Li, who is currently squeezing his family into a small rental apartment with his parents.

Li and another buyer in the project said they had been told by the developer it could not hand over the keys to the apartments because it doesn’t have the money to pay its contractors.

The plight of Zhu and Li, who asked that only their surnames be used for fear of harassment, underscores the growing debt woes of developers active in smaller cities. Many of them indulged in unbridled borrowing amid a red-hot market between 2016 and 2018 but now find themselves grappling with too much debt, sharply weaker demand and tighter regulations.

Analysts say the problem is largely confined to smaller cities and that relentless demand in big cities will keep large listed developers in business, but they expect debt defaults in the sector to climb and worry about the potential for the fallout to affect lenders and local governments.

“We will probably see rising debt defaults this year, and the market should closely monitor developers with high debt ratios and whose business is concentrated in smaller cities,” said Song Hongwei, a senior analyst at Shanghai-based property consultancy Tospur.

SO MUCH DEBT DUE

Bond defaults by property developers quadrupled last year to 26.6 billion yuan ($4.1 billion) and as of mid-March this year, developers, led by China Fortune Land, had already defaulted on 8.7 billion yuan of bonds, according to data from the National Institution of Finance & Development.

Onshore and offshore bonds from developers maturing this year are set to jump 42% to a record 900 billion yuan ($138 billion), the data also shows.

China’s developers have come under more pressure this year with the advent of new caps on debt-to-cash, debt-to-assets and debt-to-equity ratios that have been set by regulators keen to limit lending to the sector, including by trust funds and other parts of the country’s shadow banking industry.

Analyst worry about the potential for systemic risk that debt defaults may bring, although they add it is difficult to assess how large that risk is.

“The tightening financing environment may lead to a cash crunch, and there is a possibility of cross defaults among developers, trusts and third-party wealth institutions,” they added.

Local governments are often dependent on land sales for financing and any prolonged downtrend in new projects as developers rein in spending will also affect their ability to pay debt, other analysts have said.

At a national level, home prices are still on an uptrend, with figures for 70 large cities climbing 4.9% on average last year, according Reuters calculations from government data.

But prices in 19 cities, mostly smaller ones, have plunged by double-digit percentages from peaks in 2017 and 2018, data from the Chinese Academy of Social Sciences shows. The 19 cities are home to about 7.8% of China’s population.

Many small cities with persistent population outflows and weak economic prospects, have housing inventory levels equal to more than 40 months of sales, according to Chinese property research firm CRIC.

The problem of unfinished projects has prompted at least three local governments – Yantai city in Shandong province, Honghe Autonomous Prefecture and Qujing city in Yunnan province – to set official timetables for projects to be completed and step up supervision of new ones.

But some buyers are finding they have little recourse through official means.

Zhu, who still lives and works in Beijing, is hoping the lack of mortgage payments will bring China Fortune Land to the negotiating table after she and other buyers engaged in fruitless rounds of petitions and protests.

“I came from the countryside hoping through hard work to earn my own home in a city, but now I am back being rural again with an apartment in the middle of nowhere,” she said.