This article was written exclusively for Investing.com

Or, conversely, "How can I be down when the market is up?" Clients have asked me both questions and the answer is the same for each:

“There is no ‘The Market’ for stocks.”

From a U.S. investor’s perspective, there are three benchmarks that give a partial view of what stocks are doing, but they are just that—a partial view. And this does not even consider the myriad other indexes from other nations and regions.

For U.S. investing, the first of these is the venerable old Dow Jones Industrial Average (DJIA, DJI or “The Dow.”) When someone asks, “How is the market?” or a TV anchor reading his teleprompter says, “Today the market finished at xyz,” the Dow is the index they are typically talking about. Which is strange, since it is the least scientific of all the indexes…

Why do I say this? First of all, the DJI is comprised of just 30 U.S. companies out of the thousands traded on the various exchanges and around the world. There are some 3,500 stocks listed on U.S. exchanges (and about 630,000 total companies traded either over-the-counter or in other parts of the world). Using just the U.S.-listed companies, means the DJIA represents less than 1% of all these disparate firms.

Yes, they are big “blue chip” companies but, still, 1% does not give a particularly accurate picture of what your portfolio is likely to do on any given day (unless, of course, your only holding is the DJIA ETF or other fund.

Is this index truly representative of your portfolio?

It gets worse. The Dow is “price-weighted” rather than market-capitalization (“market cap”) weighted, so “dollar” movement is more important than percentage movement up or down. In other words, the most expensive stocks in the index skew the “average” more than the lower-priced stocks among the 30.

Finally, the selection of issues that comprise the Dow seems to be arbitrary bordering on capricious. A committee meets every now and again to decide if, in their opinion, the current 30 companies best represent what is happening in the broader investment landscape. If so, the DJI components stay the same. If not, off with their heads and the committee replaces them with a different company.

From 2013 to 2020 nine companies have been replaced with nine others. That means “the Dow” of today is not the same as the Dow of 7 years prior—30% of the positions in it are new!

Why does this matter? Because the DJI is still the most-cited market benchmark, so it carries a greater share of mind for the average investor who does not have time to follow the market hour-by-hour. 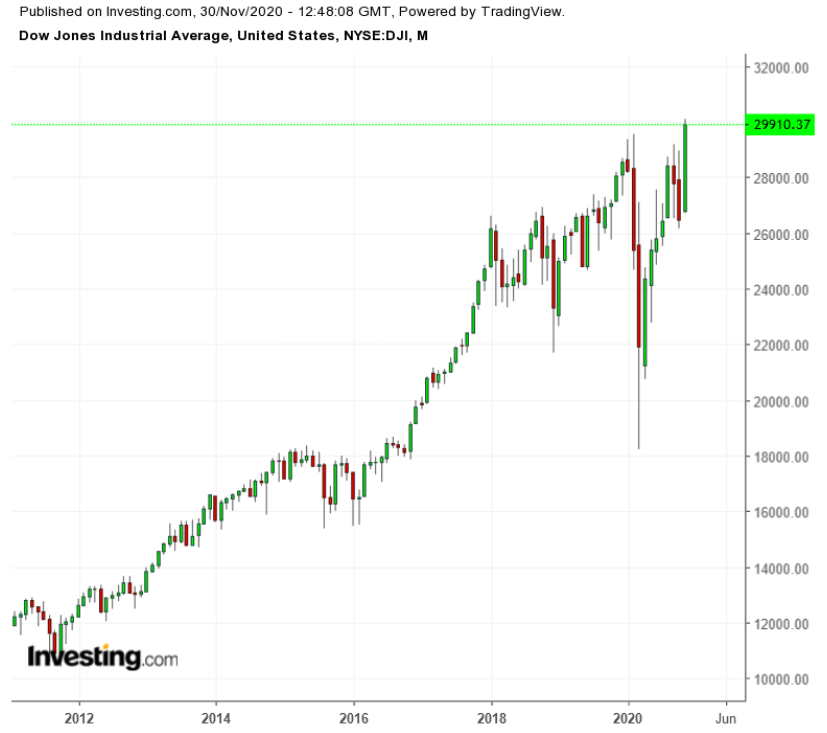 Let’s take a closer look at these changes. In 2013, Alcoa (NYSE:AA), Bank of America (NYSE:BAC), and Hewlett-Packard (NYSE:HPQ) were replaced by Goldman Sachs (NYSE:GS), Nike (NYSE:NKE), and Visa (NYSE:V). Good timing. Since then, the latter three have done much better than the former three.

In 2015, AT&T (NYSE:T) was dropped from the DJI and replaced by Apple (NASDAQ:AAPL). That has been a real coup. Apple is up hugely during that time. (In fact, 25% of the entire increase in the last 10,000 point “rise” in the Dow was due to Apple alone!) This is a case, certainly, where the one being booted was likely to continue to just plod along, while Apple is the darling of the Dow and the S&P 500.

In 2018, General Electric (NYSE:GE) was dropped and replaced by Walgreens Boots Alliance (NASDAQ:WBA). I am no fan of the basket case that GE has become over the years (starting with success guru Jack Welch's making 600 acquisitions, shifting GE into emerging markets, and entering into untenable long-term care contracts.) Nonetheless, what makes Walgreen’s more representative than an industrial that has its fingers in so many pies?

In 2020, the committee booted out Exxon Mobil (NYSE:XOM), Pfizer (NYSE:PFE), and Raytheon Technologies (NYSE:RTX). It replaced this 10% of the total number of firms in the benchmark with Salesforce.com (NYSE:CRM), Amgen (NASDAQ:AMGN) and Honeywell (NYSE:HON).

One of the reasons given for this more recent change is the shrinking influence of Apple in the index after Apple’s stock split. The committee noted that the Dow needed more technology representation in its benchmark, so they selected Salesforce.com.

Really? Apple, Cisco (NASDAQ:CSCO), IBM (NYSE:IBM), Intel (NASDAQ:INTC) and Microsoft (NASDAQ:MSFT) already comprised just under 20% of the Dow even after the Apple split.

What does the Dow Jones committee say about this?

“The announced changes help offset that reduction [as a result of Apple’s split.] They also help diversify the index by removing overlap between companies of similar scope and adding new types of businesses that better reflect the American economy.” [Emphasis mine.]

It is true that times change and replacements need to be made. American Car and Foundry, Baldwin Locomotive, and American Woolen are no longer with us. Companies become bankrupt or are acquired by other bigger companies. This is not the problem.

I believe the problem is that many index changes are done simply to bring in fresh blood, different, more successful companies or securities more likely to increase in price. The decision to change companies in a 30-company index should not be taken lightly. Are Raytheon, Exxon or Pfizer in danger of going bankrupt? Maybe someday, but that day is likely a long way off if it happens.

The two takeaways from understanding how the Dow really works are:

If a high-priced stock roars ahead, it adds a huge amount to the DJI increase for the day. If a low-priced stock held much more widely roars ahead, however, it's a ho-hummer. Before Apple’s recent 4:1 split, when Apple stock went up $1 in price, it was reflected as 10 times the move in the Dow than if ExxonMobil has the same $1 upward price change per share.

I wonder if it is mere coincidence that Exxon was dropped from the benchmark? (But since the DJIA has been around for over 100 years, let no mere mortal criticize its methodology!)

Answering the question, “How can I be up if The Market is down?” the answer is simple: very few of us own the 30 stocks, or even the same exact sectors, as the Dow. Yet because it is the grand-daddy of all benchmarks it is accorded the pole position when people talk about 'The Market'— clearly a misnomer if ever there was one!

In Part II, scheduled to be published tomorrow, I will discuss a much more representative index, the Standard & Poors 500, which measures the daily movement of 500 large-cap U.S. companies. It may be more representative, but it suffers from many of the same flaws as the Dow. I will also discuss the Russell 2000, my own approach to investing using these indexes, and an example from my own portfolio of holdings roughly based on these three indexes.

Disclaimer: Unless you are a client of Stanford Wealth Management, I do not know your personal financial situation. Therefore, I offer my opinions above for your due diligence and not as advice to buy or sell specific securities.