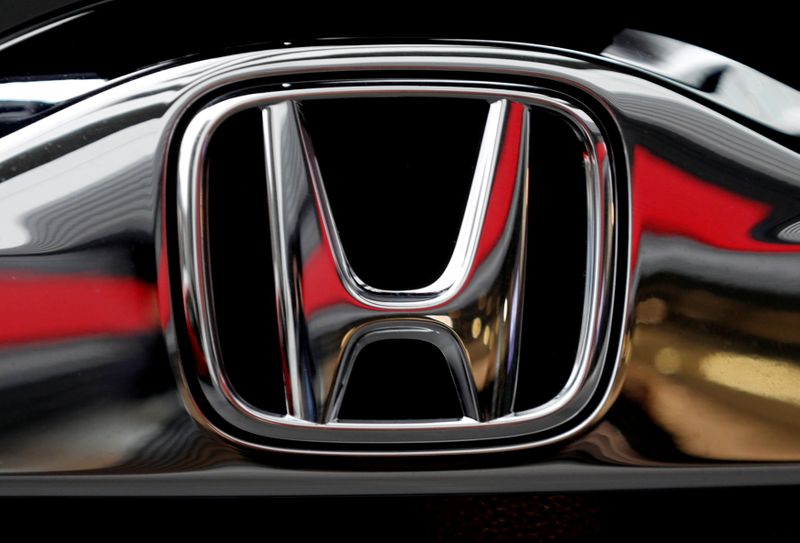 © Reuters. Honda's logo on its Modulo model is pictured at its showroom at its headquarters in Tokyo

The sales rebound led by China, the world's biggest auto market, comes as driver demand for new models including electric vehicles and autonomous drive cars grows. A global shortage of semiconductors, however, is forcing Honda and its global peers to trim vehicle production.

Honda's latest profit forecast is up from the 420 billion yen profit it predicted three months ago and higher than an average 463.6 billion yen forecast from 21 analysts, Refinitiv data shows.

The Japanese carmaker cut production last month by about 4,000 units, mainly affecting its Fit and Jazz models, due to the semiconductor chip shortage. It also reduced output of five models at five facilities in the United States and Canada. China's GAC said its joint venture with the automaker had received warnings on supply of certain models.

Sources told Reuters the automaker will also reduce its domestic output this month.

Honda said expects to sell 4.5 million cars globally in its business year to March 31 compared with a previous forecast of 4.6 million vehicles

China, one of Honda's biggest markets, grew by 6.4% in December as it continued to lead the industry's recovery from the coronavirus pandemic..

Honda is accelerating its shift to electric cars and other zero-emission vehicles, aiming for two-thirds of its output to be new-energy vehicles by 2030. Last year it launched its first mass-produced all-battery car and also plans to begin selling new autonomous drive vehicles.

The maker of the CR-V SUV crossover also posted a better-than-expected 67% jump in operating profit for the three months to Dec. 31 to 277.7 billion. That result was better than an estimated average of 176.72 billion yen from eight analysts surveyed by Refinitiv SmartEstimate.