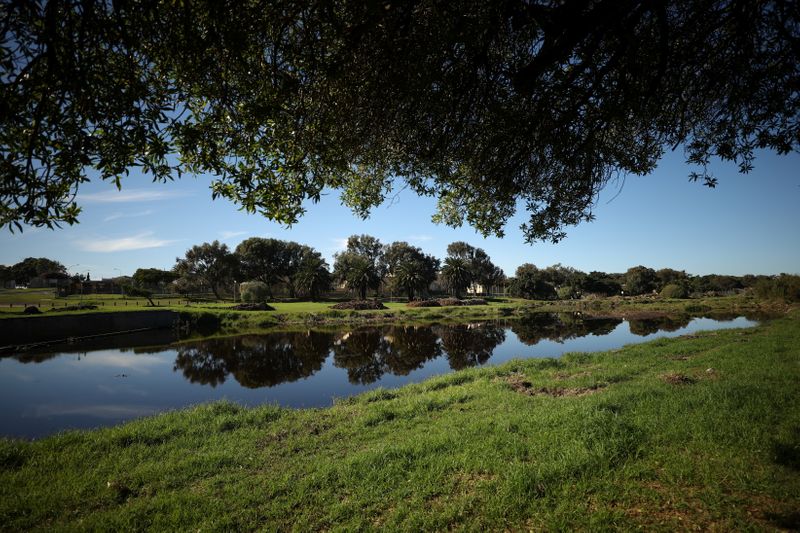 © Reuters. Trees line the banks of the historically significant Liesbeek River, close to the site of a controversial development which includes a new Africa headquarters for U.S. retail giant Amazon, in Cape Town, South Africa, May 23, 2021. Picture taken May 23, 20

The two communities drove back cattle-raiding Portuguese soldiers there in 1510. But, a century and a half later, it was where Dutch settlers launched a campaign of land dispossession.

Today it is again the scene of another conflict, this time over a development where construction is due to begin this month and which will eventually be home to a new 70,000-square metre Africa headquarters for U.S. retail giant Amazon (NASDAQ:).

“This is where land was first stolen,” said Tauriq Jenkins, of the Goringhaicona Khoena Council, a Khoi traditional group opposed to the project. “We want a World Heritage Site. We do not want 150,000 tonnes of concrete.”

The 15-hectare riverside area was previously home to a golf driving range and popular bar – a small blue plaque the only indication of its historical significance.

It is now earmarked for a 4 billion rand ($284 million) mixed-use development complete with a hotel, retail offices and residential units.

Amazon, which already employs thousands of people in Cape Town in a global call centre and data hubs, is lined up as its anchor tenant, with no other big names yet disclosed by city bosses or developers.

While some groups have welcomed the prospect of new jobs, the whole project, not Amazon’s specific plans, has faced a backlash from other community leaders as well as environmentalists and activists. They have held marches at the site and are now threatening to take the matter to court.

According to the Observatory Civic Association, which represents a nearby residential community, close to 50,000 objections to the development have been lodged so far with city and provincial authorities.

They want the development stopped and the area declared a provincial or national heritage site; environmentalists say it is important to preserve because it is an ecologically sensitive area at the confluence of two rivers.

Amazon in South Africa and the United States declined to comment on the dispute and referred queries to the developer, South Africa’s Zenprop. It in turn directed the queries to Liesbeek Leisure Properties Trust (LLTP), the structure set up to develop this specific project.

“There is no groundswell of unhappiness,” said LLTP’s Jody Aufrichtig, emphasising that the development went through an extensive public approval procedure.

“The handful of vocal objectors who remain, who were given fair opportunity to participate, simply do not like the outcome.”

Land, its history and its ownership are fraught issues in South Africa, where memories of forced removals and segregation remain fresh nearly three decades after the end of apartheid.

Such sensitivities were taken account when considering the project, Cape Town Mayor Dan Plato said in a statement, announcing his approval of the development.

“We are acutely aware of the need to balance investment and job creation, along with heritage and planning considerations,” he said, touting the development as a much-needed boost for Cape Town’s tourism-dependent, pandemic-crippled economy.

The project will create thousands of new jobs, LLTP say, while also paying tribute to Khoi and San culture and history.

Designs include an indigenous garden and a heritage centre where LLTP’s Aufrichtig said Khoi and San descendents will work as operators and educators.

Such efforts have succeeded in winning over some Khoi and San, including a group calling itself the First Nations Collective, which engaged directly with the developers.

“We chose cultural agency rather than the evil of government deadlock to achieve the objective of creating a liberated zone for our people,” said Zenzile Khoisan, spokesman for the Collective.

Mayor Plato gave the project a green light in April after a two-year provisional heritage protection order instated to allow time to examine opposition to the project lapsed last year. And Aufrichtig said development is now due to begin mid-June.

But opponents, like Martinus Fredericks, paramount chief of the !Aman (Nama) Traditional Council, said they are not ready to give up. They still hope to force a review or block of the planning permission via the courts.

“We will approach the courts,” he said. “We will mobilise every single Khoi and San person in the country to stop that development.”