With an incredible four-day winning streak and a fresh record high under its belt, can the S&P 500 Index go five for five? If that’s going to happen, the market will have to overcome what looks at first glance like a slightly disappointing January jobs report.

This week’s strong gains have been fuelled by solid earnings and hope about the economy, and investors got another shot of optimism after the Senate approved a plan that will allow President Joe Biden’s $1.9-trillion stimulus plan to pass regardless of the level of Republican support.

With its direct payments to Americans, investors have been hoping the stimulus will give consumer spending a shot in the arm and help boost the economic recovery while vaccines are becoming more widespread.

Jobs Report: A Check of the Numbers

In economic news, the government’s nonfarm payrolls number for January came in at 49,000 and the unemployment rate fell to 6.3% from 6.7%. A Briefing.com consensus had expected a headline number of 50,000 new jobs and an unemployment rate of 6.7%. While the headline number was no big surprise, it still wasn’t anywhere near as good as numbers we saw last summer and fall.

Looking just at the headline number, it feels like a slight win for the labor market in its battle with the coronavirus, but it appears we’re far from out of the woods due to some disappointing aspects deeper in the data. For example, December job losses were even worse than thought, with the government revising that number down to 227,000 jobs lost vs. its original estimate of 140,000. November jobs growth was also revised lower. This could help explain why the government’s first estimate for Q4 gross domestic product growth was lower than some analysts had expected.

The fact that jobs gains remained pretty tepid in January could indicate that sluggish economic growth is continuing into Q1, though we won’t see the government’s Q1 GDP estimate for a few months. When GDP doesn’t grow strongly, it can ultimately wind up being reflected in company earnings.

On a more positive note, January job losses were far less dramatic for the leisure and hospitality sector than the nearly 500,000 losses seen there in December. Perhaps that means the lockdown effect is slowing a little. We’ll have to wait and see.

The bad news is that the construction, manufacturing, warehousing and transportation sectors either shed jobs in January or barely gained. That’s not a sign of health in the manufacturing economy. These are the areas where you’d like to see more robust jobs growth if the economy is coming back.

Digging into these numbers a bit more, the decline in transportation jobs probably reflects airline layoffs, while seasonal factors could play into construction job losses. Meanwhile, healthcare employment is down by more than 500,000 from a year ago, perhaps because of less demand for typical health care because of people staying home.

It’s important to remember that these are only a data drop from one snapshot in time. It can take a few reports for the trends to show up. It’s good to see the slight job growth in January after December’s disappointing showing. And again, this report looks a bit worse than it might have otherwise been due to the continued cratering of leisure and hospitality jobs.

Stock index futures remained higher in pre-market trading, perhaps indicating a day of further gains for the stock market. Despite the early strength today, investors may want to watch out for some pressure later in the session from profit-taking, especially at the end of what’s shaping up to be such a strong week.

The weekly jobless claims number—which has been a closely watched barometer of economic health during the pandemic—was quite a bit better than expected. Initial claims came in at 779,000 when a Briefing.com consensus had expected 825,000. It was also encouraging to see that the prior week’s number revised down to 812,000 from 847,000.

The improvement in the labor market is a welcome sign, but nearly 780,000 new applications is above the pre-pandemic high of 695,000 and shows that the U.S. economy is far from out of the woods. With that in mind, investors were probably thinking that the still-high number won’t dent the probability of another government stimulus effort with direct payments to Americans.

Data on factory orders were also better than forecast, with December orders rising 1.1% compared with a 0.7% consensus from Briefing.com. The prior month’s data also was revised higher, to 1.3% from 1%. A key measure of business spending found in the report—nondefense capital goods excluding aircraft— rose 0.7%.

It appears optimism is coming as coronavirus cases fall and the vaccine rollout gains steam, contributing to a brighter picture for travel and leisure activities and consumer spending at physical retail stores, restaurants and theaters. Plus, corporate borrowing costs are relatively low given the Fed’s ultra-low short term interest rate. And there’s the expectation of more stimulus to come from Washington.

The strong stock-market move to the upside yesterday signalled that investors had flipped their risk-appetite switches to the “on” position. That helped dampen demand for U.S. government debt, sending the yield on the 10- and 30-year Treasuries higher. Gold prices fell sharply (see chart below).

After today’s big jobs number, investors may want a break from economic data. Next week’s economic calendar is relatively light, but there are still important reports on inflation, jobless claims and consumer sentiment.

Meanwhile, the earnings calendar next week is pretty busy. Scheduled earnings reports are expected to paint a broad picture of different parts of the economy. As usual, investors will likely be paying just as much attention, or perhaps more, to executives’ outlooks as they do to the top and bottom lines for the quarter. High-profile quarterly reports include those from Twitter (NYSE:TWTR), Coca-Cola (NYSE:KO), PepsiCo (NASDAQ:PEP), Kraft Heinz (NASDAQ:KHC), General Motors (NYSE:GM), Uber (NYSE:UBER), AstraZeneca (NASDAQ:AZN) and Walt Disney (NYSE:DIS). 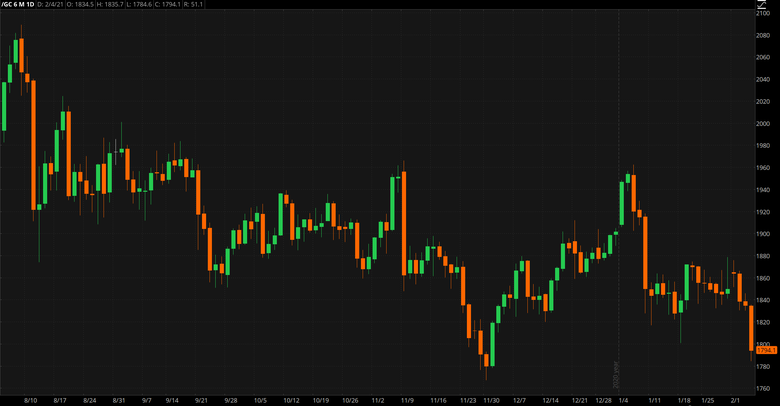 CHART OF THE DAY: GOLD DULLS: The risk-on sentiment Thursday helped pressure gold, which is often bought in times of uncertainty and sold when the mood lightens. Higher Treasury yields also pressured the precious metal by making non-interest-bearing gold less appealing. Combine all that with additional pressure coming from a rising greenback—dampening demand for dollar-denominated gold by making it more expensive for those holding other currencies—and gold slipped below the psychologically important $1,800 mark. Data source: CME Group (NASDAQ:CME). Chart source: The thinkorswim® platform from TD Ameritrade (NASDAQ:AMTD). For illustrative purposes only. Past performance does not guarantee future results.

Vaulting Valuations: The market justifiably pays attention to the FAANG stocks because they are huge and widely held. But investors also may want to pay attention to their valuations. Two in particular bear watching—Amazon (NASDAQ:AMZN) and Netflix (NASDAQ:NFLX). Both have benefited as more people stay at home during the pandemic, and investors seem to also be expecting solid earnings to continue as AMZN’s price-to-earnings ratio vs. the next twelve months of earning estimates has been north of 70 while NFLX’s has been above 50. For perspective, the SPX’s forward P/E ratio has been in the low 20s. Tailwinds for stocks in general include an improving global economic outlook for 2021, low interest rates, and generally better-than-expected Q4 2020 earnings. At the same time, it’s probably not a bad idea to remain cautiously optimistic and trust your investing strategy enough to not just jump on the bandwagon to try to chase rising stock prices just because they’re rising.

Sticking Around: Investors flocked to the relative safety of mega-cap tech names during times of heightened uncertainty because of the pandemic, and that trade hasn’t completely gone away. In addition to having lots of cash to weather the storm, these companies have products and services that have seen heightened demand as people have increasingly worked, learned, and entertained themselves from home. But it’s not like the big tech players are going to go away after COVID-19. In fact, the pandemic has served to accelerate trends that were already under way. So it appears that while investors have been easing into the re-opening trade they’re still solidly behind the big tech players.

Tech Leadership Still in Play: Major tech players have retained market leadership even after the rally expanded to other spaces after being initially concentrated in tech, according to Zacks Investment Research. After their recent earnings reports, AMZN, Apple (NASDAQ:AAPL), Alphabet (NASDAQ:GOOGL), Microsoft (NASDAQ:MSFT) and Facebook (NASDAQ:FB) recently accounted for 22.7% of the SPX’s market capitalization, dwarfing the finance sector’s 12.6% weight. Fourth quarter earnings for this group of five mega-cap tech players increased more than 41% on nearly 11% stronger revenues, Zacks said.