Google parent Alphabet (NASDAQ:) is a star performer this year.

A member of the FAANG group of stocks, comprising such notables as, Apple (NASDAQ:) and Amazon.com (NASDAQ:), the move in this digital ad behemoth has been so strong this year that it has left many investors surprised, especially since the pandemic-driven boom in the tech rally is showing some signs of peaking.

The Mountain View, California-based company’s shares have soared about 40% this year, at a time when investors are taking a break from other high-growth contenders. Closing at $2,402.30 on Monday, Google remains the best-performing name among the five mega tech stocks. 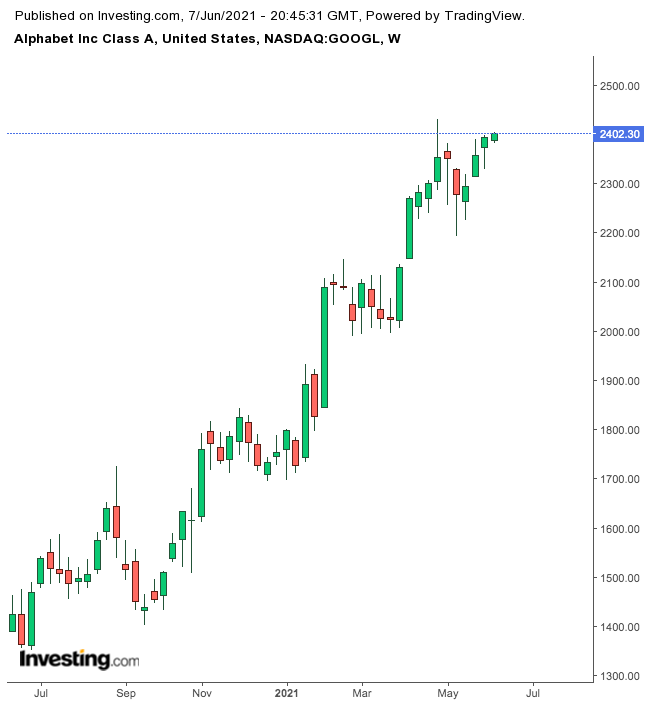 What’s attracting investors to buy Google shares is a clear sign that it’s emerging from the pandemic-triggered downturn much stronger, with its sales rebounding faster than expected.

In the that ended Mar. 31, Alphabet posted a 35% jump in sales when compared with the same period last year. Overall, Alphabet generated $17.9 billion of net income, almost doubled the amount in the same quarter in the previous year.

This growth momentum, according to many analysts, will continue as consumers resume trips to restaurants, shops and even vacation destinations—activities that fuel internet traffic and generate ad revenue for Google.

Barclays analysts in a recent note reiterated their call of Alphabet being among their favorite names in the mega-cap tech space, noting the outlook for its shares remains “bright.” The firm held its overweight rating, though raised its price target to $3,000 from $2,500.

Wedbush analysts, who have a $2,953 price target on the shares, said Google offers “a large market opportunity that we expect to have accelerated coming out of the pandemic.”

According to Wedbush analysts:

“Alphabet is well positioned in a number of key areas across its businesses that we think can sustain overall growth in its core ad business [and] drive long-term sustainable top-line growth in its burgeoning cloud business.”

Despite some calls that Google stock is becoming expensive after this year’s rally, 42 firms still have a bullish view on the shares, with some of these forecasters calling for more than 20% gains.

Besides the company’s flagship ad business, the pandemic has also given a strong boost to other units that are likely to sustain their market share. YouTube ad revenue surged during the pandemic as the video-sharing platform reached more users between the ages of 25 and 49 than all cable networks combined.

YouTube ad revenue surged 49% in the past quarter, while YouTube Shorts, its competitor to TikTok, logged 6.5 billion daily views as of March, up from 3.5 billion at the end of 2020. Google’s cloud-computing business also grew quickly on a spike in demand for internet-based services from remote workers.

With its traditional growth drivers remaining unchallenged, and the company positioning itself to grow faster in the post-pandemic world, Google’s shares will continue to outperform other mega tech peers. The stock could see more upside as the economy reopens quickly, bringing back digital ad sales from hospitality and travel businesses.