Google Is Fundamental To Internet Commerce

Alphabet Inc Class A (NASDAQ:GOOGL) has been having a hard year. Not! The company saw its revenue take a hit in the 2nd and YOY growth slowed but don’t overestimate what I am saying. Revenue fell a mere 2% in the 2nd quarter and then rebound strongly to up 14% in the 3rd. In terms of full-year growth comparisons, calendar 2020 is going to produce YOY revenue growth in the high-single to low-double-digit range compared to the high-teens it set last year. Looking forward, the company is expected to have its revenue jump another 20% and this estimate may be too low.

As a foundational part of the modern Internet, there may be no other company in a better position to reap the benefits of COVID than Google. Think about it, the company is going to bring in nearly $180 billion dollars this year and it will grow by 20% over the next 12 months. And that growth trajectory will not change for several years. Growth may slow but the roll-out of the Internet and the adoption of its use are far from over. More likely, with the onset of the 5G revolution, that use is going to accelerate again in the coming year or two. And Google will be right there earning money from ads, clicks, and services tailored to individual users’ needs.

Analyst Sentiment For Google Is Bullish And Rising

The analysts have been bullish on Google forever it seems like and that hasn’t changed. What has changed is the consensus estimate for share price and that is changing for the better. Over the last 180 days, the consensus target has increased by 1360 basis points with new targets issued on a regular basis. That target is near $1800 or about 3.5% upside but the bias is to the upside. There have been four major analyst calls since the last earnings report and their consensus is closer to $1950 or about 14% upside from recent price action.

The latest note comes from Baird. Analysts there maintained a bullish Outperform rating and upped the price target from $1750 to $2000 or 15% upside from recent price action. According to them, the favorable outlook is supported by strong holiday shopping trends and the surge of eCommerce that happened this year. Along with that, Baird is expecting a rebound of advertising dollars coming from the travel & leisure and automotive industries to coincide with the vaccine-supported economic reopening.

Analyst Colin Sebastian also says Google is a value compared to its peers, especially Apple (NASDAQ:AAPL). At face value, both are trading near 33X this year’s earnings so it’s hard to see the value. Looking at the forward estimates, however, the value becomes more apparent. Google is trading at only 28X its forward earnings while Apple is closer to 31X forward earnings. Assuming that Google will outperform the current consensus the value is even greater and suggests a multiple expansion could be on the horizon.

Google is not sitting back and resting on its laurels. The company is constantly working to expand its offering and the latest example is in the fintech arena. The company recently re-launched its Google Pay app and the response has been overwhelmingly positive. The app is now the #5 most-popular finance app on the Apple app store and trailing close behind Square, Venmo, and Mobile Cash, the last two of which are PayPal apps.

The Technical Outlook: Google Is In Reversal Or Consolidation

The technical outlook for Google is a bit mixed. The stock popped to new highs a few months ago and has been in a consolidation ever since. The factor that makes the outlook mixed is that there is a possible Head & Shoulders Reversal pattern forming within the consolidation. If the pattern confirms by falling below the $1710 there is a good chance they will fall further. The next best target for support is near $1600. On the flip side, if price action confirms support at $1710 and moves higher new highs are likely to follow. 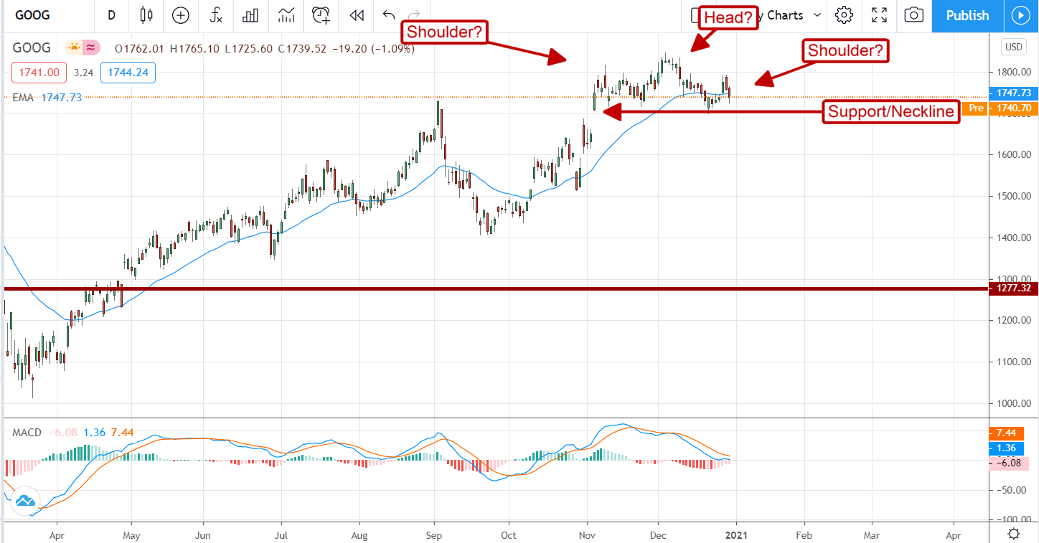