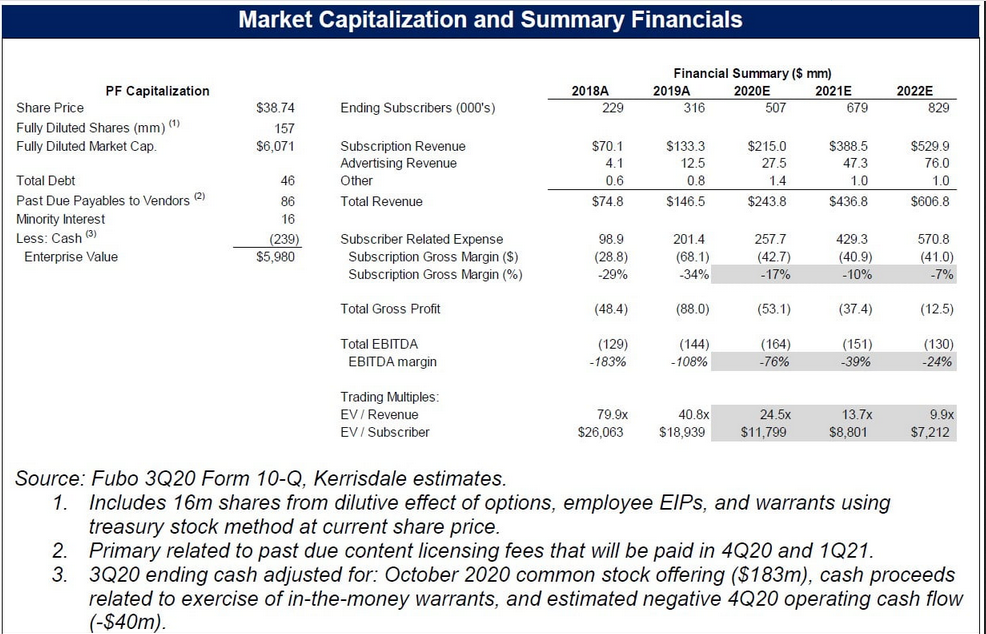 We are short shares of Fubotv, a $6bn company that has seen its share price increase 4x following its October 7th IPO on the NYSE. Remarkably, even after its recent retracement from truly nosebleed levels, Fubo still trades at valuations completely unmoored from reality: 14x 2021E sales, equivalent to $12,000 per current subscriber. We see no justification for these levels. Fubo is not Roku (NASDAQ:ROKU). Fubo is not the next Netflix (NASDAQ:NFLX). Fubo is not the next DraftKings (NASDAQ:DKNG). Fubo is a streamier version of a pay TV distribution model that is going away, only with far worse underlying economics.

Fubotv is billed as being firmly seated at the intersection of cord-cutting, connected TV advertising, and online sports wagering – but during our exhaustive investigation, we were unable to find a single industry executive that believed any of this to be true. Can Fubo control its cost structure and drive better margins in its subscription business? Former managers at Fox Sports and SlingTV certainly don’t think so. Can Fubo increase Connected TV advertising CPMs +50-75%, a crucial input for longer term ad forecasts? Not according to a current senior director at The Trade Desk, who called the notion “crazy” and explained why: Fubo has no special inventory, no special data, and no scaled audience. But the highest level of incredulity we encountered was reserved for Fubo’s sports betting ambitions. Buying Balto Sports was nothing more than buying a TechCruch article said a former FanDuel executive, and the notion Fubo will ever be a company that owns or operates a sports book is ludicrous.

With momentum now broken in the stock, we believe a flurry of near-term catalysts will add further downside pressure to shares: 1) the latest Fubo app download data from a 3rd party analytics provider suggests gross additions have collapsed since Election day and now sit at levels flat to last year, strengthening the view that the outperformance witnessed in 3Q20 was merely a function of a sports calendar that will never repeat, 2) with recent trading characterized by extreme volatility and shareholders sitting on massive gains after only a couple months, today’s lock-up expiry of over 68m shares may lead to disorderly selling, and 3) Fubotv burns significant cash and has ambitious growth plans. Having endured a near-death experience once before, Fubo will not be inclined to wait much longer before doing a dilutive equity offering.

Fubotv’s subscription revenue will never generate meaningful profits. Accordingly, we value Fubo solely on its advertising revenue stream. Applying a 10x EBITDA multiple to our 2025E estimate for advertising revenue, discounted to the present, yields a fair value of $10.00 (-74%), a price that coincidentally, Fubotv deemed fair when it sold shares in its IPO only three months ago. 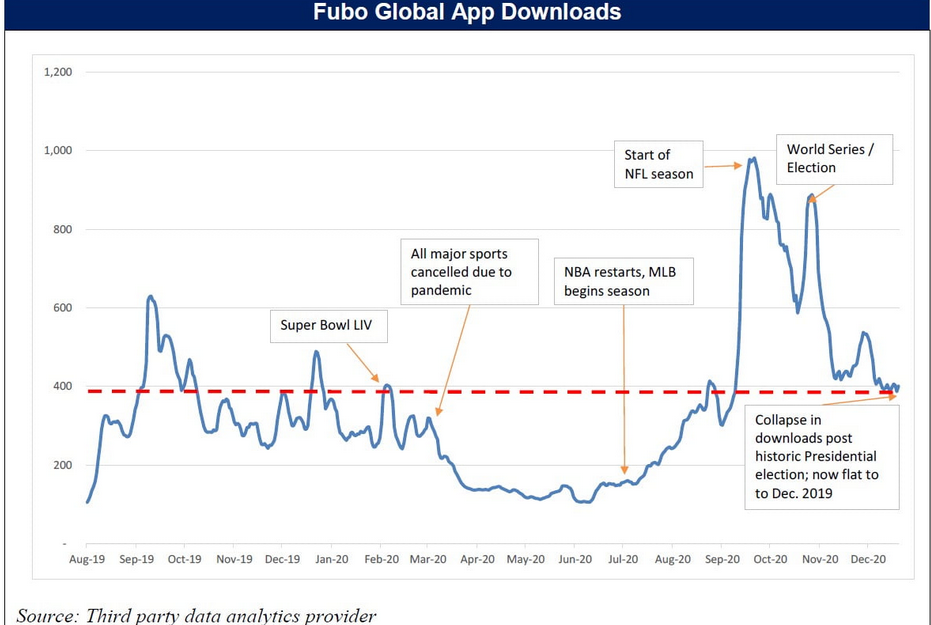 Fubo app downloads have collapsed late in 4Q. 3rd party data through the end of December show a dramatic decline in new sign-up activity. The unprecedented return of every major sport all at once drove an unusually large surge in September. After a brief bounce in November around Election Day, sign-ups have now fallen to the same level as this time last year – undermining the bull thesis of a more lasting level of adoption due to the proliferation of connected TVs and rising consumer awareness. If new sign-ups do not improve from these levels in a seasonally soft period for churn, expectations for first quarter subscriber levels and profitability may be in jeopardy.

Fubotv’s core subscription business is structurally unprofitable. Fubo is woefully subscale and no realistic level of growth in the coming years will alter this in a way that enhances its leverage in content negotiations. The pivot to becoming a mainstream content distributor now limits Fubo’s ability to create innovative packaging while subjecting them to unavoidable cost escalation. Fubo’s strategy of dropping content to manage costs is reactionary and destined to cause eventual spikes in churn and SAC. All Fubo can do is continue to raise price, take on more and more expensive tiers, thereby shrinking its addressable market. Fubotv has effectively replicated many of the negative pressure points of the cable business but without a broadband pipe to lean on.

Fubotv will never run a sports book. Fubo has used online sports betting as a buzzword to boost interest in its stock. Multiple industry experts interviewed all stated it would be foolish for Fubotv to enter this already highly competitive space as a sports book operator. Rather than a “first step” toward sports wagering, the acquisition of Balto Sports, a company with 3 employees and no valuable IP, is proof the company is simply spinning a story around running a sports book, not actually preparing to deliver on it. The only way Fubo will capitalize on sports betting is as a marketing partner, the economics of which are immaterial relative to the current stock price.

Leading connected TV advertising experts do not believe Fubotv can deliver on long-term advertising growth expectations. Interviews with The Trade Desk (NASDAQ:TTD), boutique media research advisory firms, along with former executives from Fox Sports, Sling, and Hulu Live all yield skepticism Fubo can deliver on aggressive advertising forecasts. Fubo does not have any data or inventory that is differentiated and cannot provide the reach many advertisers crave. As a content aggregator rather than a creator, Fubotv sits on the wrong side of programmatic trends where major brand advertisers increasingly go straight to the source. These structural limitations will hamper Fubo’s ability to earn higher CPMs and increase advertising ARPU.

Large lock-up expiry followed by potential capital raise threatens to further lower shares. The expiration of large share lock-up agreements on December 30th and January 7th, pose significant near-term downside risk. The market appears blind to the relevance of Fubotv’s need to execute a reverse merger earlier this year: the strategic shareholders elected to let Fubo fend for itself rather than fund ongoing cash burn. They are not long-term holders and they are unlikely to be particularly price sensitive. As a perpetual cash burning company with lofty growth ambitions, we think odds of a capital raise are high once the January 7th lock-up expires.

Valuation is absurd. Fubotv’s core subscription business (~90% of total revenue) generates negative gross margins and yet the company is valued at 14x EV / ‘21E revenue. The most intellectually flimsy valuation comparison we have seen cites Roku as the basis for Fubo’s value. When we spoke to IR, the first question we were asked was if we were Roku investors. Roku is featured in the comp tables of the biggest sell-side bulls to justify Fubo’s inflated price. None of this makes sense. Roku is an aggregator of an immense range of content with dominant market share. With 50m accounts, its scale and market share is so significant, content pays it to be relevant. Roku’s value is driven by a high margin platform division which represents 76% of total revenue. The equivalent for Fubo is its paltry 10% contribution from advertising revenue.