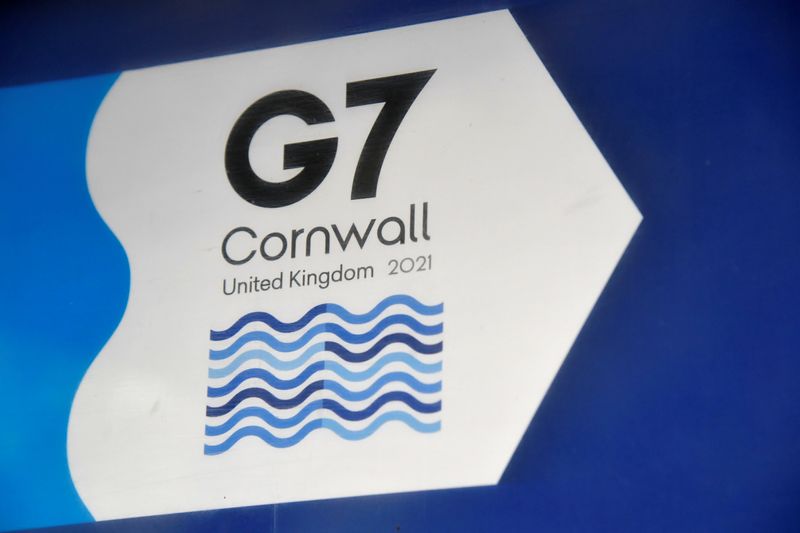 © Reuters. FILE PHOTO: A G7 logo is seen on an information sign near the Carbis Bay hotel resort, where an in-person G7 summit of global leaders is due to take place in June, St Ives, Cornwall, southwest Britain May 24, 2021. REUTERS/Toby Melville

By Guy Faulconbridge and Steve Holland

LONDON/WASHINGTON (Reuters) – The Group of Seven rich democracies will try to show the world at a summit this week that the West can still act in concert to tackle major crises by donating hundreds of millions of COVID-19 vaccines to poor countries and pledging to slow climate change.

U.S. President Joe Biden, on his first foreign trip since winning power, will try to use the summit in the English seaside village of Carbis Bay to burnish his multilateral credentials after the tumult of Donald Trump’s presidency.

Whether on COVID-19 or climate change, the leaders of Britain, Canada, France, Germany, Italy, Japan and the United States want to illustrate that the West can compete with the power of China and the assertiveness of Russia.

“This is a defining question of our time: Can democracies come together to deliver real results for our people in a rapidly changing world?” Biden, 78, asked in a June 5 opinion piece in The Washington Post.

“Will the democratic alliances and institutions that shaped so much of the last century prove their capacity against modern-day threats and adversaries? I believe the answer is yes.”

At the weekend, the G7’s finance ministers agreed a deal on a minimum corporate tax rate, which U.S. Treasury Secretary Janet Yellen said reflected a desire to work together.

“It shows that multilateral collaboration can be successful,” she said.

Biden meets British Prime Minister Boris Johnson, chair of the summit, on Thursday, the day before the start of the leaders’ three-day meeting. On Sunday, Biden will become the 13th serving U.S. President to meet Queen Elizabeth II, 95, who will receive him at Windsor Castle.

He then travels to Brussels for a NATO summit and a European Union summit before he meets Kremlin chief Vladimir Putin in Geneva on June 16.

The G7 was founded in 1975 as a forum for the richest nations to discuss crises such as the OPEC oil embargo. Its countries have a combined annual GDP of $40 trillion, or just under half of the global economy.

The West, though, feels insecure. The coronavirus ravaged the United States and Europe and climate change has challenged the assumptions of many of its economic models. It faces a truculent Kremlin in Moscow and the spectacular re-emergence of China as a great power.

The G7 summit in Carbis Bay, 300 miles west of London, will be the first for Biden, Italy’s Mario Draghi and Japan’s Yoshihide Suga, and the first post-Brexit G7 for Johnson.

It will be Angela Merkel’s last G7 before she steps down as German Chancellor after an election in September, and Emmanuel Macron’s last before a 2022 election in France. The leaders of Australia, India, South Korea and South Africa were invited, though Indian Prime Minister Narendra Modi will have to miss the meeting due to the COVID-19 situation at home.

Behind the public pronouncements, diplomats say, G7 leaders will talk about how to deal with China and Russia, how to win back the trillions of dollars in wealth wiped out by COVID-19 and how to ensure free trade in a world tilting towards China.

China, the world’s second largest economy, has never been a member of the G7. Russia, admitted as a G8 member six years after the fall of the Soviet Union, was suspended in 2014 after it annexed the Crimea peninsula from Ukraine.

Moscow and Beijing have both told the G7 to stop meddling in their affairs.

After many rich powers hoarded COVID-19 vaccines, Johnson wants the G7 to donate hundreds of millions of doses to poorer countries, many of which are far behind the West in vaccinating their populations.

“Vaccinating the world by the end of next year would be the single greatest feat in medical history,” Johnson said.

Beyond the security that will cocoon world leaders, thousands of protesters will try to disrupt the summit over concerns ranging from climate change to a draft bill that would give British police more powers to curb demonstrations.

“Our rights weren’t won through quiet polite protest. Our rights were won through being noisy, disruptive and annoying,” said the Kill The Bill group – one of about 20 activist organisations to have joined a ‘Resist G7 Coalition’.