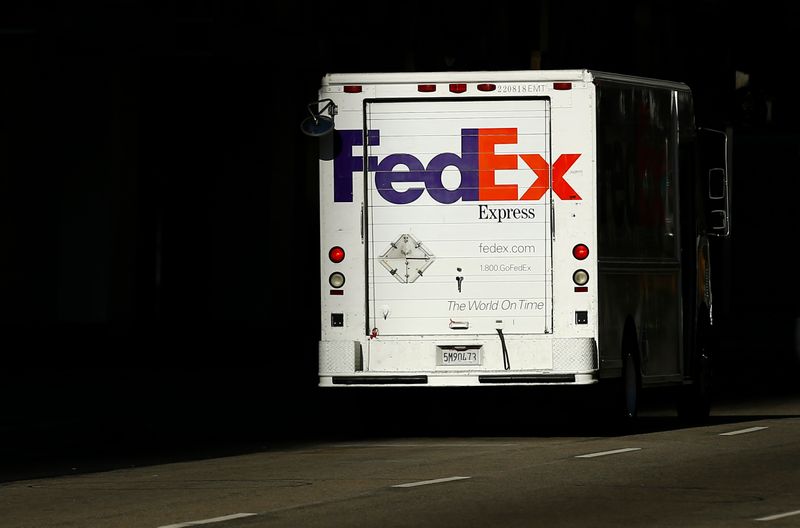 © Reuters. A Federal Express truck on delivery is pictured in downtown Los Angeles

By Ankit Ajmera and Shreyasee Raj

(Reuters) – Many U.S companies, including FedEx (NYSE:FDX) and General Motors (NYSE:GM), were forced to temporarily shut operations on Tuesday as a bone-chilling winter storm caused power outages and gas shortages in parts of the country.

The rare deep freeze swept the southern North America over the three-day Presidents Day holiday weekend, leaving millions without power and sending front-month gas futures to an over three-month high.

General Motors canceled the first shift at its plants in Spring Hill, Tennessee, Bowling Green in Kentucky, Fort Wayne in Indiana and Arlington in Texas, factories that make some of its most profitable pickup trucks and sport utility vehicles including Chevrolet Silverado and Escalade.

"We will be making decisions at the respective plants later this morning regarding their production status for 2nd shift today," a GM spokesman said.

Japan's Toyota Motor (NYSE:TM) and Nissan (OTC:NSANY) Motor also scrapped the first shift at some of their U.S. plants. Jeep maker Stellantis said it suspended production at its Toledo assembly complex in Ohio.

The company said it did not have any coronavirus vaccine shipments in its network on Monday night.

A spokeswoman for Tyson Foods Inc (NYSE:TSN), the biggest U.S. meat company by sales, said the firm had suspended or scaled back operations at some facilities.

The freeze also wreaked havoc on the U.S. energy sector, bringing operations to a halt at the Houston Ship channel, while several oil refineries remained offline.