Since the initial positive vaccine news in the second half of 2020, investors have been betting that several industries and businesses will benefit from the opening up of economies. One of these segments has been retailers. In the US, over the past year, the Dow Jones Retailers index is up 60%.

Today, we introduce FTSE 100 member Next (LON:NXT) (OTC:NXGPY), one of the leading retailers in the UK. The Leicester-based company is focused on clothing, footwear and home products.

Its history goes back to 1864, when it was founded in Leeds by tailor Joseph Hepworth. The group currently has about 700 stores, 500 of which are in the UK and Ireland. The rest are in continental Europe, the Middle East and Asia. In addition, Next also has a significant e-commerce presence, which has helped generate revenue in the past year. 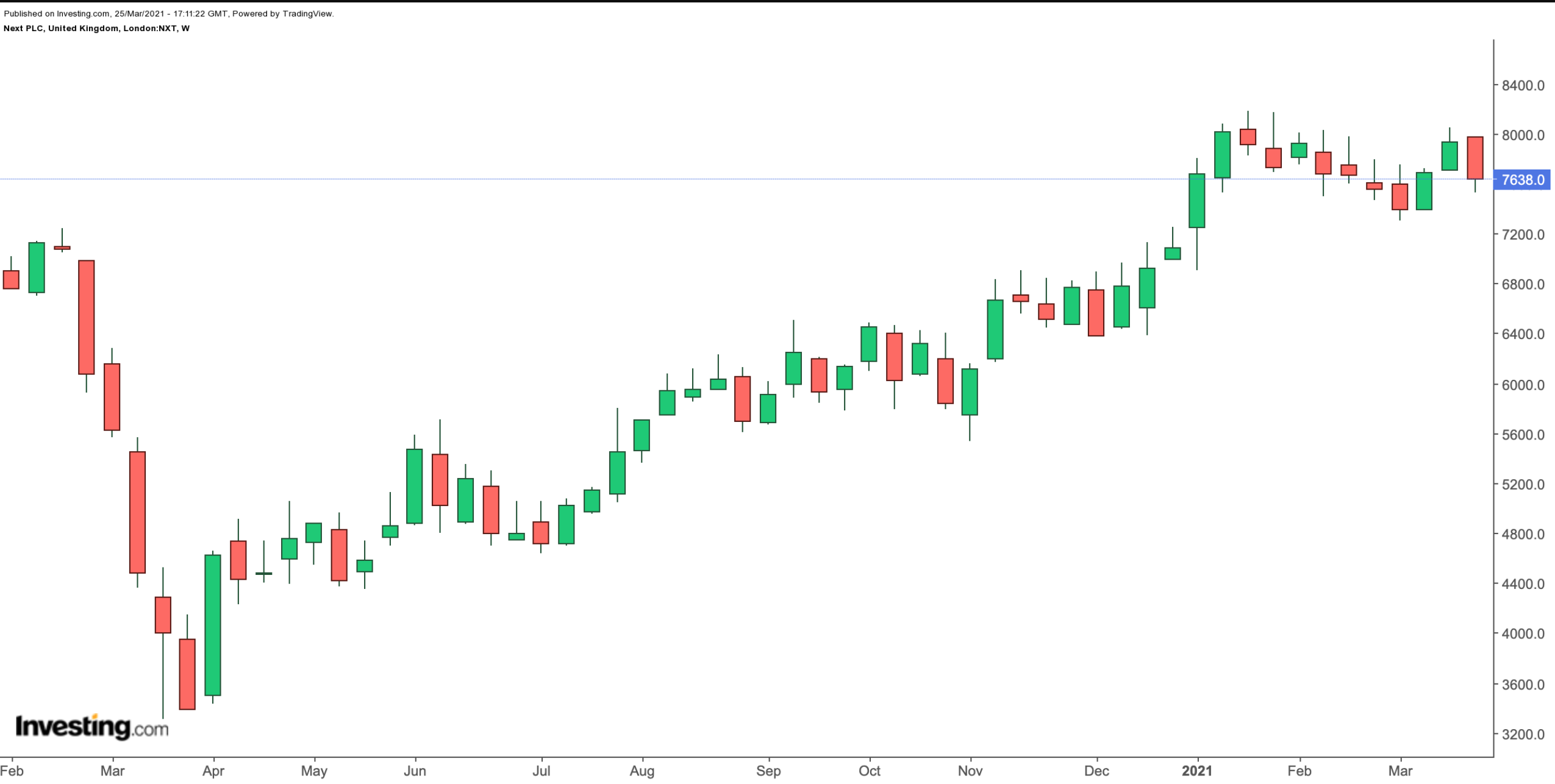 The UK began its second lockdown in early November. According to the UK's Office for National Statistics:

"In January 2021, retail sales volumes decreased by 8.2% when compared with December 2020 as tighter nationwide coronavirus (COVID-19) restrictions affected sales… [However,] the impact of restrictions on the retail sector was not as large as that seen in April 2020 during the first full month of retail restrictions."

Next released its most recent trading statement on Jan. 5. Full price sales in the nine-week period that ended Dec. 26 were down 1.1% YoY. However, they were much better than the earlier guidance of -8% give in October 2020. In the of 2020, the group saw a 30% increase in online sales compared with 2019 while at the same time seeing a 30% drop in retail sales.

The retailer was able to cash in on the festive season at the end of 2020, which saw retail sales greatly increase for the weeks in December as the UK government eased restrictions for several weeks.

Since January, the country has rolled out an extensive vaccination program. The number of UK residents who have received the first dose of vaccine is close to 29 million (in a population of about 68 million). The number of cases has also been decreasing steadily.

As a result, on Apr. 12, the country is likely to open non-essential retail businesses, which would include Next stores. Most analysts expect businesses, including retailers, to see significant improvement when the lockdowns begin easing.

Anecdotal evidence as well as various metrics suggest the UK population has never been more cash heavy than right now, as COVID-19 has turned Britain into a nation of savers through furlough pay and minimal outgoings and discretionary spending.

Next shareholders have been well rewarded over the past year. Forward P/E and P/S ratio stand at 17.73 and 2.81, respectively. Although this is not an overly stretched valuation level, most of the good news regarding the lifting of the current lockdown is already priced into the NXT share price. After all, markets are always forward-looking.

Thus, there could soon be profit-taking in the shares. We’d look upon a potential drop toward 7,300p as a a level to buy. In the long-run, we are bullish on the business and expect the company grow its market cap.

Going forward, management is likely to put more emphasis on the e-commerce operations as well as product diversification. The increased home products range could also grow significantly in the future, given the success it has seen in the past quarters.