Over the last couple of months, the Fed started its campaign to prepare markets for a “taper” of its asset purchases.

As CNBC noted, the voices of other Fed members are becoming more prominent.

“Comments by Fed officials in the past several weeks suggest the issue of tapering looks likely to be discussed as soon as the Federal Open Markets Committee meeting next week. The Fed may be on track to begin asset reductions later this year or early next year.

Here are some of the comments:

Fed members use these “trial balloons” to prepare the markets for a “policy shift.” However, as discussed previously, the Fed walks a very tight rope with monetary policy. Moving too quickly would have potentially disastrous results on the financial markets.

Once you get beyond hints from Fed members, there are other issues. The robust recovery, financial institutions, and money markets are encountering QE-related problems.

“Banks are struggling to digest the reserves they receive when the Fed purchases assets from them. As a result, their ongoing ability to facilitate additional amounts of QE is increasingly becoming problematic.

“Zoltan Pozsar, credit analyst and Fed expert at Credit Suisse, summed the situation as follows: ‘(The) use of the (reverse repurchase program RRP) facility has never been this high outside of quarter-end turns. The fact that the use of the facility is this high on a sunny day mid-quarter means banks don’t have the balance sheet to warehouse any more reserves at current spread levels.’

“Secondly, the Fed is struggling with the recent reduction of Treasury balances held at the Fed. As a result, the Treasury is issuing fewer short-term bonds. Such results in a scarcity of money market securities and collateral supporting derivatives. Consequently, short-term interest rates are starting to go negative.

The two problems make it progressively more challenging to maintain the pace of QE and keep rates from going negative.”

Importantly, there is a limit to how many bonds the Federal Reserve can lift out of the market. As stated, there are already problems on the short end of the curve. Furthermore, their purchases of mortgage-backed bonds have created another housing price escalation on the longer end. 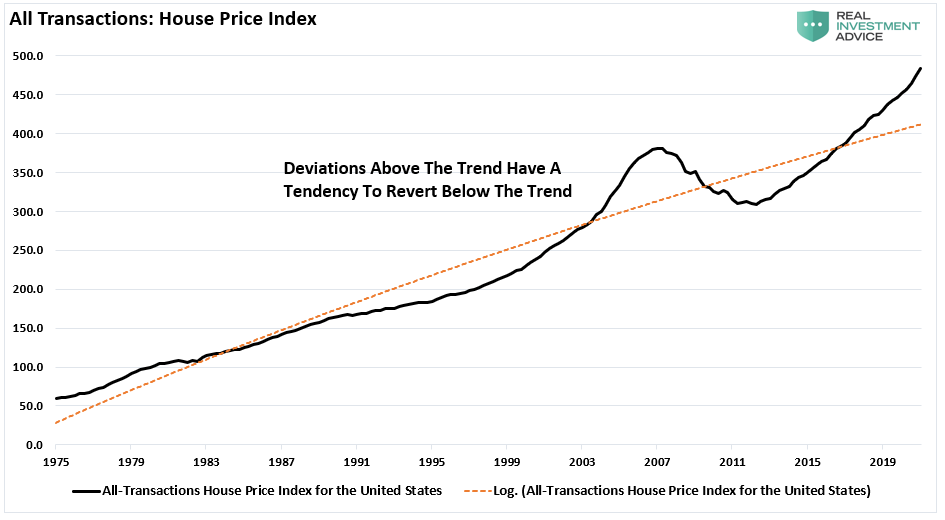 Once the Fed starts to try and lift off the “gas pedal,” the inflation of assets supported by the monetary policy will slow.

In other words, the “clock starts ticking” when the Fed reverses course.

As discussed previously, there is a correlation between expanding the Fed’s balance sheet and the index. Whether the correlation is due to liquidity moving into assets through leverage or just the “psychology” of the “Fed Put,” the result is the same. 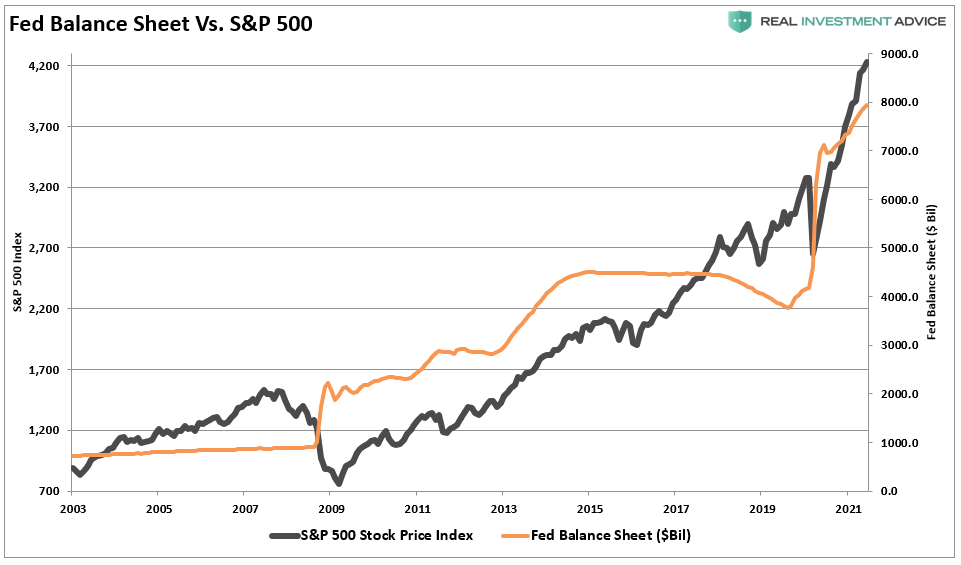 Therefore, it should also not be surprising that when the Fed starts “tapering” their bond purchases, the market tends to witness increased volatility. The grey shaded bars in the chart below show when the balance sheet is either flat or contracting. 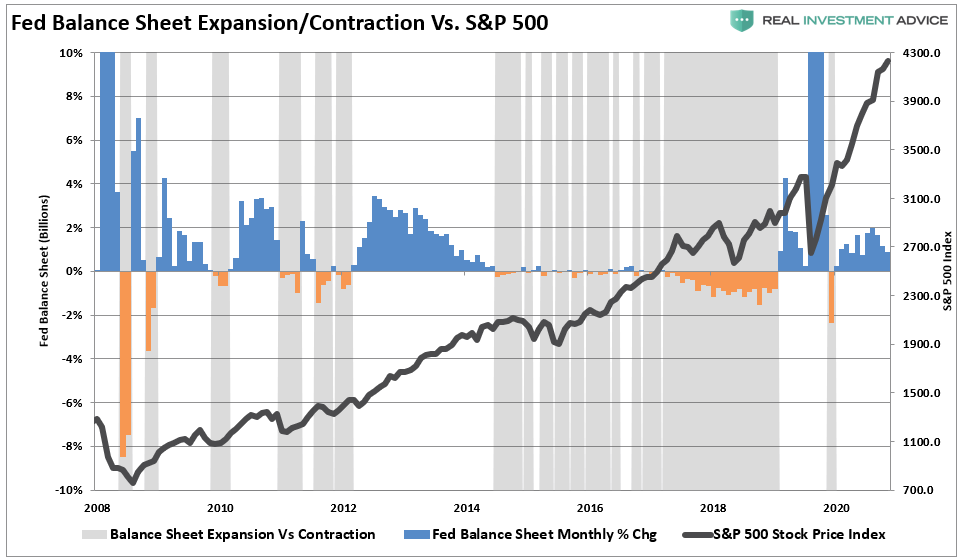 The risk of a market correction rises further when the Fed is both tapering its balance sheet and increasing the overnight lending rate. The negative impact of tighter monetary policy on asset prices is of no surprise. 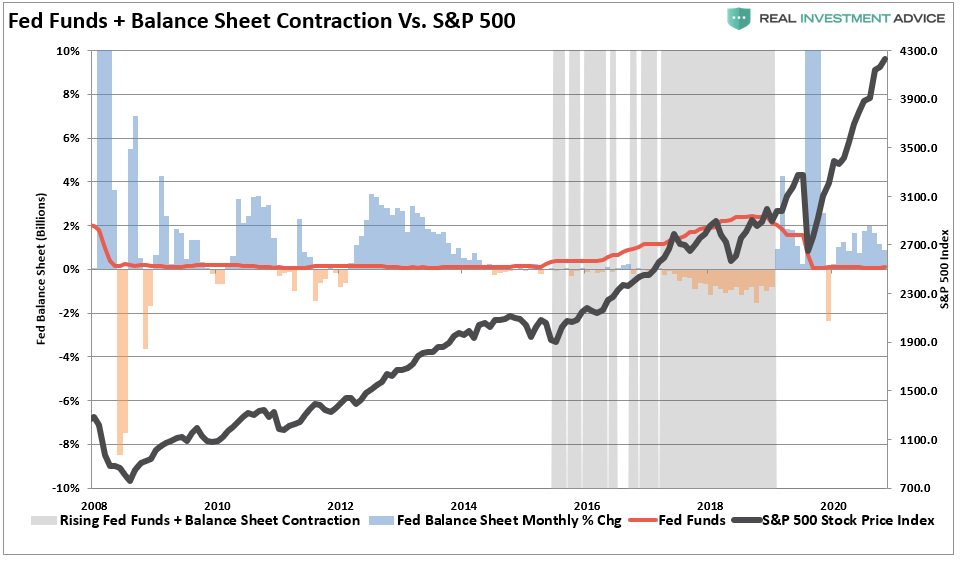 What we now know, after more than a decade of experience, is that when the Fed starts to slow or drain its monetary liquidity, the clock starts ticking to the next corrective cycle.

Bonds As A Risk Hedge

Understanding that volatility is a risk once the Fed starts to “taper,” the question is how to “hedge” that risk?

The easy answer is to reduce the equity exposure that suffers the most from a volatility spike. But, as discussed recently in “Warning Signs Of A Correction,” there is an advantage of just having a more significant holding of cash.

Another way to hedge portfolio risk is to buy Treasury bonds.

Ironically, while the Fed states that their goal with “QE” is to suppress interest rates, historically, Treasury rates increase as investors move from “risk-off” to “risk-on” trades. As Michael illustrates.

“The graph below shows the yield on ten-year UST notes rose during each QE period and fell upon its conclusion. As circled, yields fell precipitously when the Fed reversed QE via Quantitative Tightening (QT).” 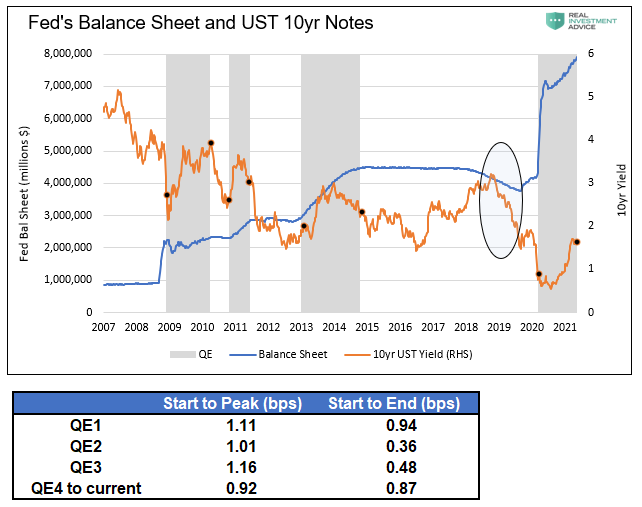 “Ten-year yields tend to rise about 1% from the start of QE to peak yield levels during QE. Equally important, yields tend to fall toward the end of QE.”

Again, just as investors shift from bonds into stocks when “QE” is increasing, the opposite is true when investors sense the Fed is beginning to reduce accommodation.

“Currently, yields are close to their cycle highs. If we believe the Fed is nearing tapering, yields could be peaking. Based on prior QE taper experiences, a yield decline of 1% may be in store for the next six months to a year if the Fed tapers.” 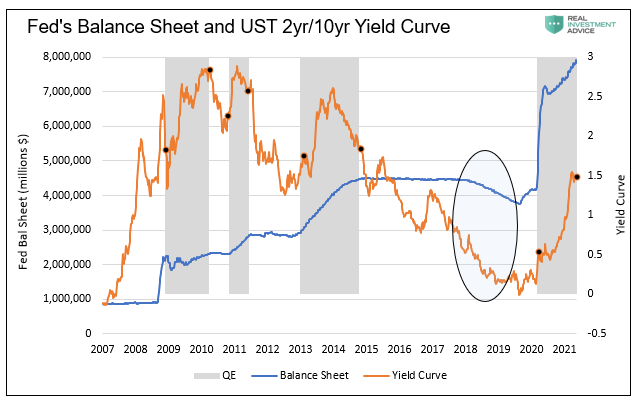 With inflation running hot, housing prices significantly elevated, and multiple signs of excess speculative risk in the market, it is not surprising the Fed is talking about “tapering” asset purchases.

Will their actions create a “volatility event” in the market? No one knows for sure, but history over the last decade suggests it will.

While the Fed may be starting to “think about thinking about tapering,” all we are suggesting is that you may want to start “thinking about risk management.”

I could be wrong.

But isn’t it worth having a plan in place just in case I’m not?

“Strategy without tactics is the longest path to victory; tactics without strategy is the noise before defeat.” – Sun Tzu, The Art of War