Fed week is here and, once again, analysts expect Chairman Jerome Powell and company to stay the course on rates and stimulus. For now, at least.

Last week’s sizzling May inflation data and continued strong jobs growth could be under a microscope when the Federal Open Market Committee (FOMC) gets together tomorrow. Worries about rising prices could be high on the list of reporters’ questions when Powell holds his press conference the next day. It’s a precarious time in the economy with inflation worries and people getting back to work, so the Fed is probably going to have to be incredibly measured as it always is and perhaps a little more so.

While the Fed seems to be sticking to its view that inflation is transitory (to borrow a Fed expression), some members have come out lately and mentioned the chance of a stimulus tapering. It would be very surprising to see anything like that right away, but there’s growing sense it could get more of an official stamp of approval by the end of the summer or early fall, according to a Reuters poll of economists. People likely want to see if Powell can shed more light on the timing.

Most major indices rose just a bit in pre-market trading Monday after European stocks marched to a new record high, but there doesn’t seem to be a lot of conviction. Volatility remains on the light side, down below 16 for the Cboe Volatility Index (). That’s not far above the post-COVID low. , meanwhile, hit a new post-COVID high above $71 a barrel.

More Price And Demand Data Ahead Of Fed Meeting

It’s a day without numbers, which is always a bit tricky because lack of data can sometimes give outside news more influence on the market. Things get more interesting tomorrow with a look at retail sales for May. Consensus on Wall Street is for 0.6% decline from April, according to research firm Briefing.com, but remember that March and April were historically strong months.

Even a 0.6% slide would still represent decent sales historically. It would also be up sharply from a year ago, when COVID shut down much of the economy. The last retail sales report showed demand for clothing, sports equipment and general merchandise falling, so we’ll see if any of those categories picked up in May. The report could be interesting for the Consumer Discretionary sector, where there’s some bifurcation between the Walmarts and Costcos of the world that never shut down and companies that are in the process of reopening now as most of the country goes back to full capacity for shoppers.

The other big number tomorrow is the second half of the inflation equation: Producer prices (PPI) for May. Last week was the consumer price index (), which rose 0.6% overall in May and 0.7% for the that strips away energy and food costs.

PPI is seen rising 0.5% for both the headline and core, Briefing.com said. That’s still pretty high historically, but not eye-popping. Either way, both PPI and retail sales data could play into the Fed’s views of the economy as they begin their meeting tomorrow and conclude Wednesday.

Consumer sentiment for early June released Friday rose slightly from May and was above Wall Street’s consensus, but inflation expectations remained elevated, a possible bearish sign (though you’d never notice it amid last week’s market dynamics). One big factor is the price of gasoline. We’ve seen an incredible run in , and $70 a barrel is a critical area to watch in terms of the inflation picture. Food prices are also up significantly over the past few months.

It’s one of the biggest questions for everyone. If PPI shows inflationary pressure, how should we think of inflation going forward? It seems like so far the data and the Fed tell two different stories, and the bond market is buying the Fed’s story. One possible sign of that is continued weakness in the , which traded near 1.46% this morning, down 30 basis points from its March high. What is the rate picture? Two months ago if you’d have asked many they would have said the 10-year yield is going to 2%. Now the question is whether it can even hold 1.5%.

The so-called “FAANG” stocks hung in decently on Friday despite some unpleasant regulatory news from Capitol Hill. Lawmakers proposed bipartisan bills that would seek to rein in Tech, The Wall Street Journal reported Friday. These include a bill that seeks to make Amazon (NASDAQ:) and other large companies effectively split into two companies or shed their private-label products.

“If the bills become law—a prospect that still faces significant hurdles—they could substantially alter the most richly valued companies in America and reshape an industry that has extended its impact into nearly every facet of work and life,” The WSJ said.

This Washington focus on what lawmakers from both parties say is too much power for the FAANGs has been pretty relentless the last few years, and these bills appear to affect Apple (NASDAQ:) as well as Amazon.com (NASDAQ:), Alphabet (NASDAQ:) and Facebook (NASDAQ:). For a long time there’s been this idea that maybe AAPL could somehow escape being pulled into the so-called “monopoly” controversy. Maybe not any more. AAPL shares actually rose Friday despite this.

Financial stocks, on the other hand, had a really tough week and we’ll see if that continues. There was an incredible down move in the 10-year yield. It fell through what many analysts had seen as key support at 1.55% and finished the week at 1.46%. This is a tough environment for banks. There are a couple auctions of shorter-term Treasuries scheduled this week, so we’ll see how those go. Meanwhile, in the secondary market, some of the shorter-duration notes are actually posting negative yields.

Defensive areas of the market enjoyed a strong week, with health care and real estate dominating the leaderboard and investors also piling into fixed income, pushing the 10-year yield below 1.5%. Financials struggled before rebounding slightly on Friday, but Tech made up ground. Despite all the focus on so-called “value stocks,” the Tech sector is solidly in the green so far in June.

Want To Trade “Memes?” Have A Plan Going In

Meme stocks made a big splash last week and aren’t likely going away anytime soon. People last week searched for volatility and more than found it in the memes. Traders want to trade, and when they see volatility they often come in and get engaged.

With that in mind, the first thing investors need to ask themselves is, “What’s my game plan?” Investing for a day or two is a lot different than if you’re investing for a year or two. One mistake investors tend to make is holding both short-term and long-term stocks to the same standards. By identifying which investments belong to which goals, you can possibly avoid that.

Outside of the excitement around FAANGs and “memes,” last week was a slow, dull trading environment with major indices staying in range. While the did make new highs and posted another record close Friday, the move wasn’t really too exciting because the SPX had spent so long flirting with the record and didn’t really explode past it in a big way. Instead, it felt like traders were dipping their toes into the water above the old high, not launching a new ship, so to speak. Volatility eased and volume was relatively low.

The market could continue to be slow early this week ahead of the Fed meeting and with corporate news likely subdued. Still, slow markets can be dangerous for traders, especially when volatility gets low. There’s an old Wall Street saying that goes, “Don’t short a dull market.” While that’s just an adage and not a trading plan, it also could arguably warn that you need to be careful at this juncture now that new highs have been made. 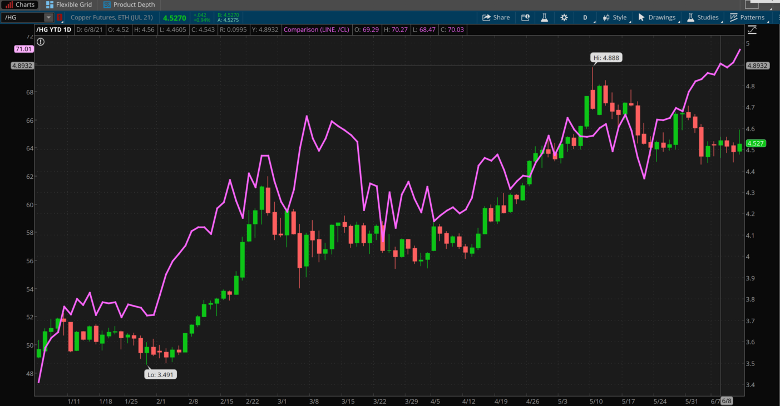 CHART OF THE DAY: COPPER AND CRUDE CRUISE. Though some other commodities and gold have levelled off a bit lately, crude (/CL—purple line) stayed hot last week, and (/HG—candlestick) held on after a tough early June. The strength in these two commodities is a double-edged sword. They’re probably contributing to current high inflation, but their popularity also could reflect strong consumer demand. Data Source: CME Group (NASDAQ:). Chart source: The thinkorswim® platform. For illustrative purposes only. Past performance does not guarantee future results.

Biogen Approval—What it Might Mean for Biotech: This may sound a bit arcane at first, but stick around. Looking back at last week’s U.S. Food and Drug Administration (FDA) approval of Biogen’s (NASDAQ:)) Aduhelm for Alzheimer’s disease, it’s interesting that the FDA specifically cited data showing the drug’s mechanism of action appeared to work. The FDA noted how the drug “reduced the level of amyloid plaques.” Scientists have theorized that reducing those plaques could slow Alzheimer’s, but it’s still not completely proven.

What’s the possible broader meaning here for the pharma industry, and biotech in particular? If the FDA approves more drugs based on evidence that they work in ways that theoretically could help patients but haven’t been proven to yet, that’s very encouraging news. Traditionally, biotech drugs are far more complex than traditional “small-molecule” drugs, making exact benefits less clear at times. They’re also often more expensive to develop and manufacture, meaning higher risk for companies that make them.

Knowing that the FDA might consider loosening the regulatory strings even a little could conceivably mean more companies sticking with development and entering the FDA approval process, possibly resulting in more revenue down the road to make up for some of their research and development costs. Those costs and the low rate of approval have always been prickly pears for investing in biotech.

FDA Approval Isn’t Finish Line: One question specifically around BIIB’s Aduhelm, however, is uptake. Some doctors may be hesitant to use a drug that doesn’t have a convincing efficacy profile, said Kevin Huang, analyst at research firm CFRA. Insurance companies may be reluctant to reimburse until a confirmatory trial requested by the FDA verifies the drug’s clinical benefit, and the high cost of Aduhelm is also a possible barrier to market penetration.

Overall, the BIIB approval helped give the Nasdaq Biotech Index (NBI) a nice 5% boost last week to outpace major stock indices. Still, the NBI is up just 6.6% for the year, well below the 13% gains for the S&P 500 Inde and still way below the peak NBI level hit back in February. Eli Lilly (NYSE:), which isn’t a biotech company, saw shares rise sharply last week after the BIIB approval amid thoughts it could benefit as it develops an Alzheimer’s drug of its own that clears amyloid plaques. Other stocks with similar treatments that might benefit include Roche Holding (OTC:) and Eisai (OTC:), which is partnering with BIIB on another, Barron’s noted.

Copper Keeps Humming: Though cooled off a bit at the end of last week as the dollar firmed, the metals market continued to shine overall. and prices moved higher Friday, and copper remains above $4.50 a pound. That’s not far from all-time highs for the industrial metal posted earlier this year.

This article was originally...