Today’s a big day for Fed watchers. So is tomorrow. Meanwhile, the “tech check” continues, with selling overnight hitting mega-cap stocks in that sector.

We’ll talk more about Tech below. First, Fed Chairman Jerome Powell begins his semi-annual testimony to the Senate Committee on Banking, Housing and Urban Affairs. He heads over to the House on Wednesday for more of the same, and it’s all going to be live-streamed. This is what people once called “Humphrey Hawkins” testimony because it was mandated by Senators Humphrey and Hawkins (NASDAQ:HWKN) in 1978 (yep, that was Sen. Hubert Humphrey, who sadly died before the bill was signed into law).

A lot of people are on pins and needles wondering what Powell might say about economic growth coming out of the pandemic and whether he’s worried about things getting overheated. The Atlanta Fed’s GDPNow forecasting model predicts an amazing 9.5% seasonally-adjusted gain in gross domestic product this quarter. That’s up from a prediction of 5% just a few weeks ago. Recent economic data like retail sales and industrial production could be driving some of these projections, though the GDPNow forecast is well above the Wall Street average.

Analysts generally expect 6% or better growth in Q2 and Q3, according to a Wall Street Journal forecasting survey. Even if that’s against pretty easy Q2 comparisons versus a year ago, it’s high enough to maybe have some analysts scratching their heads and wondering if Powell and company might decide to do something about curbing possible inflation.

Having said that, it’s kind of hard to believe Powell will start singing a different tune any time soon, especially considering that as far as the Fed might be concerned, this growth is the logical outcome of nearly a year of zero rates and $120 billion a month in Fed bond purchases. Why would Powell want to kill the goose that laid a golden egg, so to speak? We know he’s expressed concern since last March about the slow pace of employment growth and the fact that many people haven’t gotten back on their feet yet. So one school of thought is that Powell likes what he’s seeing and has no intention of backing off.

The other school of thought is that Powell could start hinting at holding something in reserve to keep inflation from getting out of hand. At this point, that’s like fighting a ghost, since inflation just isn’t really very evident yet. He’s said a bunch of times that the Fed will give investors plenty of time to adjust to any hints at a pullback in Fed support of the bond market, so the question is whether he might use today and tomorrow to make an early warning. Either way, Powell is usually very careful with his words and isn’t likely to go “off-script.”

The CME FedWatch tool suggests about 85% chances of the Fed’s benchmark rate remaining at zero the rest of the year. Still, that’s a big change from all the talk we heard back a few weeks ago about no rate increase until 2022 or 2023.

Other than the Powell testimony, the day features earnings from luxury home builder Toll Brothers (NYSE:TOL) after the close. When TOL reported last time, its CEO said he was seeing “the strongest housing market” in his 30 years at the company thanks partly to low interest rates. TOL’s conference call might be a chance to see if this interest rate-sensitive sector is starting to feel any heat from rising yields.

As long as yields keep pushing higher in the bond market, it could pose headwinds for the Tech sector. That particular part of the market was a mess on Monday, with FAANGs, Microsoft (NASDAQ:MSFT), Tesla (NASDAQ:TSLA) and the semiconductors continuing to take a pounding.

Growth stocks like these—which led things higher last year when so many investors were searching for safety in the familiar companies and the stay-at-home economy—just don’t tend to do as well in a rising yield environment. A lot of them have pretty big valuations based on hopes for powerful earnings growth, but high yields often act as a speed brake on earnings gains. There might be a little profit-taking going on, too. It doesn’t mean necessarily that people are going into higher-yield investments, only that they’re seeing other areas of the market they may want to go into after a great couple-year run.

The chip sector, which recently defied the rest of Tech by continuing to rally, got taken out to the woodshed Monday. This included a 3% loss for Nvidia (NASDAQ:NVDA), which is expected to report later this week.

Remember, we’ve been here before. The Nasdaq 100 is down four sessions in a row going into today, but it also had a rough September and October before picking up steam by the holidays. Tech sometimes has these kinds of stretches where things get out of whack, and in recent years they haven’t lasted too long. No one’s gotten rich fading Tech the last two years, but we’re at all-time highs and they’ve had an incredible run. You have to step back now and then.

While rising yields are often bad news for Tech, they tend to help the Financials, Energy, Materials and Industrial sectors because they point to possible renewed economic growth. All those sectors—as well as many “reopening” companies like airlines—did well Monday, and helped the Dow Jones Industrial Average even as the S&P 500 Index fell for the fifth-straight session. NASDAQ Composite, which so many Tech companies call home, suffered worse than 2% losses. Commodities, especially copper, continue to reflect hopes for the economy coming back. Lumber recently scored an all-time high.

Walt Disney (NYSE:DIS), American Airlines (NASDAQ:AAL), United Airlines (NASDAQ:UAL) and ExxonMobil (NYSE:XOM) got off to strong starts for the week. Big banks, including Morgan Stanley (NYSE:MS) and Bank of America (NYSE:BAC), also racked up some gains. Crude flirted with $62 a barrel, and some analysts think $75 is possible as U.S. production looks like it might be slow to come back from the Texas storm. Analyst upgrades showed up in some of the “cyclical” stocks, too, which added some support.

Meanwhile, Kohls (NYSE:KSS) shares hit a 15-month high after the company’s leaders rejected an activist investor group’s attempt to seize control, MarketWatch reported. Yesterday’s 6% rally could indicate investor confidence that this could light a fire, so to speak, under the company’s leadership to improve things. That being said, yesterday’s rally in KSS—which reports earnings next Tuesday—took shares into the mid $50s. A year ago KSS bottomed out below $11 and at one point was the subject of some bankruptcy speculation. 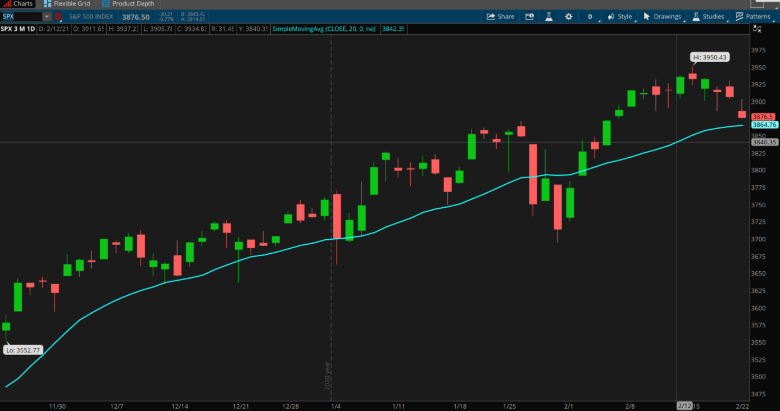 CHART OF THE DAY: SPX TESTS KEY TRENDLINE. This three-month chart of the S&P 500 Index (SPX—candlestick) shows how it’s bounced off its 20-day moving average (blue line) again and again since late November. It closed Monday at 3876, just 10 points above the 20-day, so today’s an important session to see if that trendline can hold. Data source: S&P Dow Jones Indices. Chart source: The thinkorswim® platform. For illustrative purposes only. Past performance does not guarantee future results.

VIX In The Mix: The sort of sector shuffle we’re seeing often injects a bit of volatility. The CBOE Volatility Index posted decent gains to start the week—jumping from 22 to above 26 at one point Tuesday morning—and there’s been no sign of any long-term move below the historical average of around 20. VIX hasn’t been below 20 for any length of time since the early days of the pandemic, and forecasting more volatility hasn’t been a bad call over the last year. However, it’s pretty amazing how quickly VIX dropped back into the low 20s following that crazy surge in January up to 37 when the short-squeeze frenzy got everyone frantic for a week or two. Still, though the index has had its gyrations, if you were to look at the S&P 500 VIX Futures market, you’d see traders are pricing a VIX of about 30 all the way out to October 2021.

Thrown In Deep End: For the first time, Airbnb (NASDAQ:ABNB)—now in the ranks of public companies following its initial public offering (IPO)—is expected to report earnings this Thursday afternoon. As ABNB’s results may indicate, it was a great year to go public but not the best quarter for a travel-based company to release earnings for the first time. They’re projected to lose $9.01 a share, according to Wall Street consensus, on revenue of $740 million. That should be interesting in more than one way, first of all to see how the company handles its first time in the earnings spotlight, and also for any insight they may have on the tourism business. With ABNB and any travel-oriented company now, you’re basically betting on the future, because the present picture isn’t all that pretty.

Last week, for instance, Marriott International (NASDAQ:MAR) reported Q4 system-wide revenue per available room, or revpar, dropped by 64.1% year over year. The good thing, if you’re an established firm like MAR, is that comparables get much easier starting as soon as Q1, when we lap the first wave of the pandemic. For a newer company like ABNB, there aren’t any public numbers from last year to compare against.

Exchanging Punches: If you’re old enough, you might remember that joke about putting a humidifier and a dehumidifier in the same room to “fight it out.” In a way, that’s how the stock and bond markets look right now. Every time major indices rise, so do bond yields, making people nervous about possible pressure on future earnings and forcing stocks to retreat. Then every time they retreat, the “buy the dip” crowd emerges, trying to get in at lower prices and sending stocks up again.

That could help explain why the S&P 500 Index has been marching pretty much in place since early February, rising about 1% since Feb. 5. During that time, it’s stayed just above its 20-day moving average, which now sits near 3866, and generally has bounced off the 20-day on recent downturns since late November. The exception was in late January when it fell moderately below the 20-day four-straight sessions before mounting a rally to new highs. With that in mind, perhaps keep the 20-day moving average on your radar in the coming days and see if “buy the dip” saves the SPX from a more dramatic move lower. The SPX closed just 10 points above the 20-day MA on Monday.