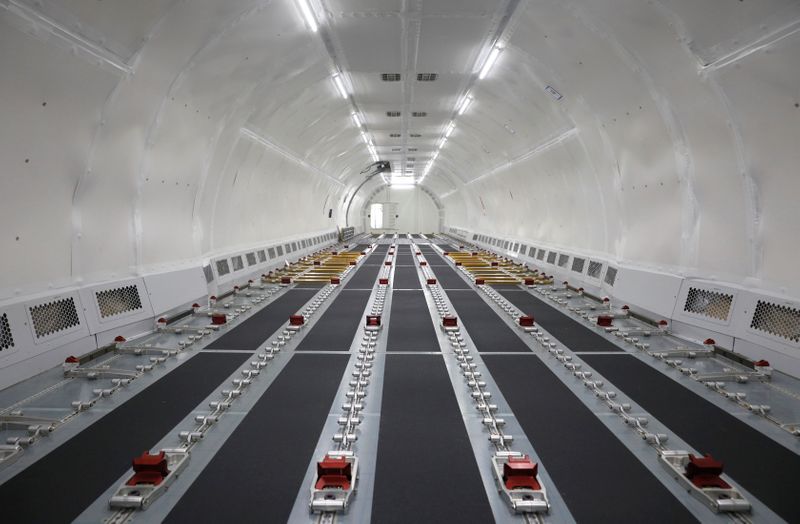 © Reuters. View of the interior of a fully converted Airbus A321 freighter at an ST Engineering hangar in Singapore 2/2

SYDNEY/JERUSALEM/MONTREAL (Reuters) – From Air Canada to China's CDB Aviation, airlines and leasing firms are rushing to permanently convert older passenger jets into freighters, betting on a boom in e-commerce as the value of used planes tumbles amid the pandemic.

"We estimate that most slots are sold for 2021 and at least 40% for 2022," Cirium Head of Market Analysis Chris Seymour said. "There is an increase in newer-generation programs, notably the 737-800 and A321 as well as the A330, although older types like the 767 continue to see strong demand, driven in the past few years by Amazon building their own fleet."

The market value of 15-year-old planes has fallen by 20% to 47% since the start of the year depending on the model, according to advisory firm Ishka, which makes freighter conversions more attractive.

The P2F conversions are a step beyond the cheaper temporary conversions many airlines have implemented during the pandemic, which remove passenger seats to carry more cargo.

Permanent conversions are a financial bet that air freight demand, which was weak before COVID-19, will remain strong for years to come as shoppers turn to e-commerce. The airline industry estimates it will take until 2024 for passenger traffic to recover to 2019 levels.

Freight markets are notoriously volatile, however, and have been beset by extended downturns; shortage can quickly turn into overcapacity, analysts warn.

Normally about half of the world's cargo is carried in the bellies of passenger planes, but the hit to demand has left the world more reliant on dedicated freighters.

Boeing said cargo yields had risen by 40% through September because of the pandemic-related passenger disruptions, and it forecasts more than 60% of freighter deliveries over the next 20 years will be conversions rather than new widebody freighters like the 777. Narrowbody freighters are almost all conversions.

The conversion boom is also helping aviation maintenance, repair and overhaul groups offset some of the lost business from the decline in passenger flights.

Such conversions generally cost millions of dollars on top of the cost of the aircraft and take three to four months, said ST Engineering Aerospace president Jeffrey Lam said.

His company is ramping up capacity, with plans to convert at least 18 A321 planes next year, rising to around 25-30 annually in the future, up from single digits this year.

ST Engineering also may add converted freighters to its leasing business, which has focused on passenger planes, he said.

IAI can convert 18 or more 767s a year and produces most of those used by Amazon.com Inc (NASDAQ:AMZN).

"We are investing a lot of effort to meet the market demand," said Yosef Melamed, general manager of IAI's aviation group, which is also working on the first-ever P2F conversion of the larger 777-300ER as part of a 15-plane contract with GECAS.

"What happened with the coronavirus outbreak, commercial flights were significantly reduced … international flights dropped to nearly zero," he said. "So the only solution for transporting cargo, and with the trend that people are staying at home ordering online, is cargo planes."

U.S.-based Aeronautical Engineers is also seeing a dramatic increase in demand for conversions, said Robert Convey, its senior vice president for sales and marketing, citing a 30-40% fall in the value of planes.

"We're seeing younger and younger aircraft being converted due to the large number of passenger aircraft that have been grounded and are not likely to return to service in the near future," he said.

Grant Stevens, vice president of corporate services at Canada's KF Aerospace, said increased demand for P2F conversions, which grew from about 10% of its business before the pandemic to about half today, has helped offset a decline in requests for aircraft maintenance.

"We have been able to employ most of our staff by doing conversions," he said.