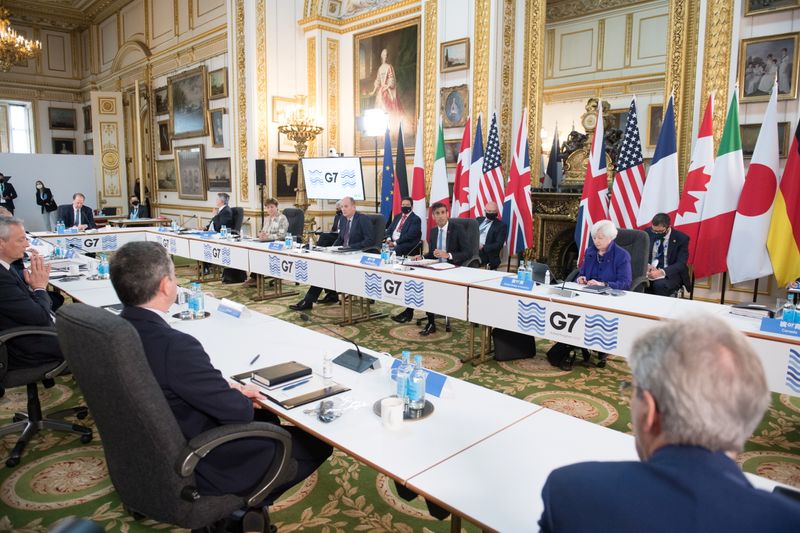 By Leigh Thomas and David Lawder

(Reuters) – Finance Ministers from the Group of Seven (G7) rich nations have said they are close to a landmark accord setting a global minimum corporate tax rate, an agreement that could then form the basis of a worldwide deal.

Such a deal aims to end what U.S. Treasury Secretary Janet Yellen has called a “30-year race to the bottom on corporate tax rates” as countries compete to lure multinationals.

WHY A GLOBAL MINIMUM TAX?

Major economies are aiming to discourage multinationals from shifting profits – and tax revenues – to low-tax countries regardless of where their sales are made.

Increasingly, income from intangible sources such as drug patents, software and royalties on intellectual property has migrated to these jurisdictions, allowing companies to avoid paying higher taxes in their traditional home countries.

With its proposal for a minimum 15% tax rate, the Biden administration hopes to reduce such tax base erosion without putting American firms at a financial disadvantage, allowing competition on innovation, infrastructure and other attributes.

The Trump administration took a first stab with a U.S. corporate offshore minimum tax in 2017. The “Global Intangible Low-Taxed Income,” or GILTI, tax rate was only 10.5% – half the domestic corporate tax rate.

WHERE ARE THE TALKS AT?

The G7 talks feed in to a much broader, existing effort. The Organization for Economic Cooperation and Development has been coordinating tax negotiations among 140 countries for years on rules for taxing cross-border digital services and curbing tax base erosion, including a global corporate minimum tax.

The OECD and G20 countries aim to reach consensus on both by mid-year, but the talks on a global corporate minimum are technically simpler and less contentious. If a broad consensus is reached, it will be extremely hard for any low-tax country to try and block an agreement.

The minimum is expected to make up the bulk of the $50 billion-$80 billion in extra tax that the OECD estimates firms will end up paying globally under deals on both fronts.

HOW WOULD A GLOBAL MINIMUM WORK?

The global minimum tax rate would apply to overseas profits.

Governments could still set whatever local corporate tax rate they want, but if companies pay lower rates in a particular country, their home governments could “top-up” their taxes to the minimum rate, eliminating the advantage of shifting profits.

The OECD said last month that governments broadly agreed on the basic design of the minimum tax but not the rate. Tax experts say that is the thorniest issue.

Other items still to be negotiated include whether investment funds and real estate investment trusts should be covered, when to apply the new rate and ensuring it is compatible with U.S. tax reforms aimed at deterring erosion.

WHAT ABOUT THAT MINIMUM RATE?

Talks are focusing around the U.S. proposal of a minimum global corporation tax rate of 15% – above the level in countries such as Ireland but below the lowest G7 level.

That rate is, however, somewhat lower than the 21% in discussion leading up to the G7 meeting and countries including France argue it should be viewed as a floor for setting a higher, more ambitious level.

Any final agreement could have major repercussions for low-tax countries and tax havens.

The Irish economy has boomed with the influx of billions of dollars in investment from multinationals. Dublin, which has resisted European Union attempts to harmonize its tax rules, is unlikely to accept a higher minimum rate without a fight.

However, the battle for low-tax countries is less likely to be about scuppering the overall talks and more about building support for a minimum rate as close as possible to its 12.5% or seeking certain exemptions.