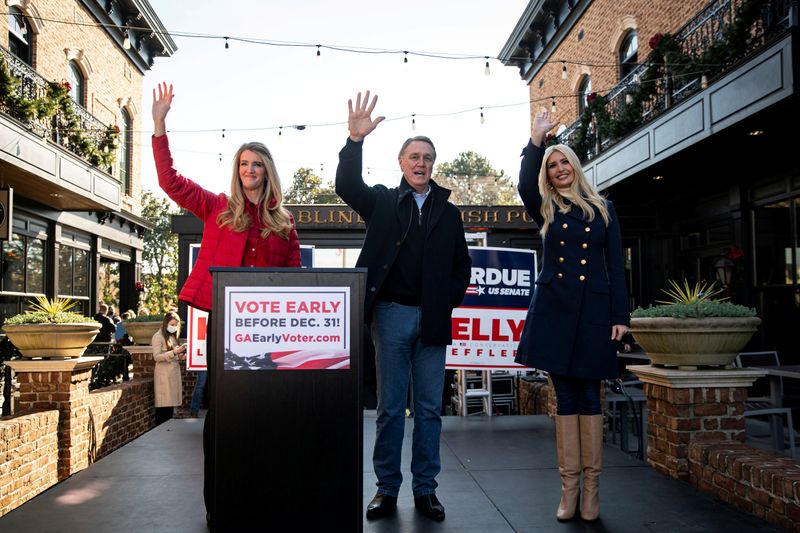 NEW YORK (Reuters) – Investors have been weighing a major political unknown since the November election that could ripple through asset prices: control of the Senate.

But while investors see some risks in how Tuesday's runoff elections in Georgia go between incumbent Republican Senators David Perdue and Kelly Loeffler and Democratic challengers Jon Ossoff and Raphael Warnock, there should be at least some relief at long-awaited clarity over the balance of power in Congress.

WHAT IS AT STAKE?

If Republicans win at least one Senate seat, they will maintain a slim majority. If Democrats sweep the twin runoffs, the chamber would be split 50-50 and the tie-breaking vote would go to Vice President-elect Kamala Harris, giving President-elect Joe Biden's party full sway over Congress.

Betting market PredictIt https://www.predictit.org/markets/detail/4366/Which-party-will-control-the-Senate-after-2020-election gives Republicans a 60% chance of retaining the Senate majority as of Friday.

A unified government would present Biden with enhanced ability to reshape the world's largest economy, from rewriting the tax code to boosting stimulus and infrastructure spending.

Biden has in the past proposed raising the corporate tax rate to 28% from 21%, as well as spending $2 trillion on infrastructure.

Some investors are weighing the potential of more stimulus ahead if Democrats take the Georgia seats. A $892 billion relief package was passed by Congress last month, which Biden has called a "downpayment" on a bigger stimulus. Senate Majority Leader Mitch McConnell has declined to schedule a swift vote on increasing COVID-19 relief checks from $600 to $2,000.

Another round would be made more difficult if Republicans retain control of the Senate – although even if Democrats win the Georgia seats they could still struggle to pass spending legislation.

While markets typically hate uncertainty, risk appetite has been strong since the Nov. 3 election despite the unanswered question surrounding the Senate. The S&P 500 logged a gain of about 11%.

Investors in the U.S. stock market are pricing an uptick in volatility around the runoff results, according to the CBOE Volatility Index, the stock market's fear gauge, and options activity, analysts said.

"S&P 500 options are pricing in a lot more volatility over the next month than markets have experienced over the previous month," Susquehanna International Group’s Chris Murphy said in a note, citing the Georgia Senate runoff as a possible catalyst.

Republicans winning both seats would be positive for stocks and limit the need for investors to tweak portfolios, some analysts said.

Any policy changes the Biden administration tries to bring would have to garner bipartisan support and necessarily be more moderate.

Even with just one victory, the Republicans could hang on to control of the Senate and preempt the need for big changes to asset allocations, said Edward Moya, senior market analyst at OANDA.

For the battered U.S. dollar, it could mean less government spending which threatens to weigh on the greenback, and less risk of tax hikes that some see as limiting growth, analysts said. Still, analysts think the dollar is heading lower whatever the outcome.

Democrats nabbing both seats has the most potential for market upheaval – but analysts are not all in agreement about exactly how.

A blue wave would spur a big reshuffling of positions, due to increased regulatory risks for banks, technology companies and the energy sector, Moya said.

The prospect of higher corporate taxes is also viewed as negative for stock prices.

"I think you could see some aggressive selling, at least by traders, if there is that blue wave," said Tim Ghriskey, chief investment strategist at Inverness Counsel in New York.

Still, a Georgia sweep would only give the Democrats a slim Senate margin, meaning Democratic proposals such as on tax may be watered down, analysts have said.

Michael Purves, chief executive of Tallbacken Capital Advisors, conversely thinks it would be positive for equities, since it could signal a larger fiscal package.

Chris Woods at Jefferies (NYSE:JEF) said Democrats taking the Senate would mean "an ever greater convergence of loose fiscal and monetary policy" which would have negative implications for U.S. Treasuries and the dollar.

In Treasuries, the longer-dated end of the yield curve could rise further if the Treasury Department has to issue more new debt, driving prices down and yields up.

For the dollar, the prospect of increased government spending could lead to further weakness.

"The dollar is weakening in any scenario but it will get weaker faster under a Dem sweep," Purves said, citing higher deficits and the potential for "more sluggish growth because of higher taxes down the road."