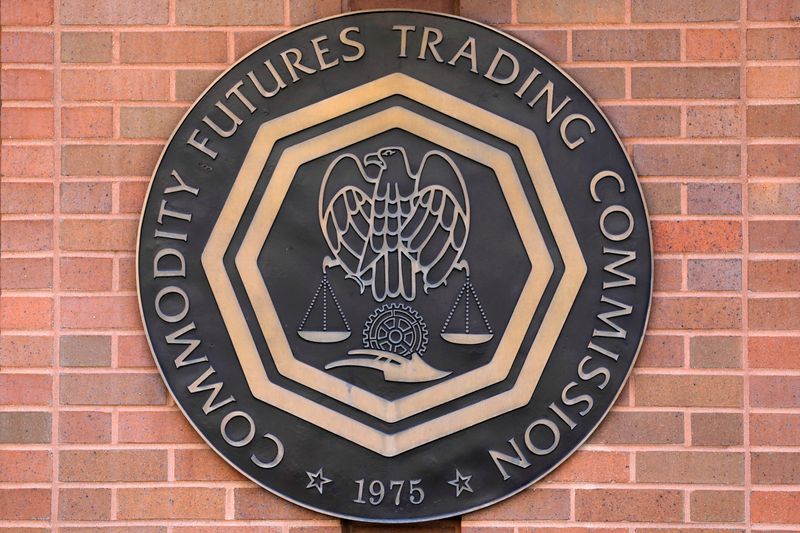 © Reuters. FILE PHOTO: Signage is seen outside of CFTC in Washington, D.C. 2/2

A former corporate attorney and senior Treasury Department official, Tarbert was nominated by President Donald Trump to be both chair and one of five commissioners at the Commodity Futures Trading Commission (CFTC), taking office in July 2019.

Commissioners are political appointees, with a maximum of three from the same party allowed at any time. The chair serves at the president's discretion, but commissioners are independent.

Tarbert, a Republican, said he wants to return to the private sector. While he will resign as chair, he expects to stay on as a commissioner after Biden takes office on Jan. 20 while he finalizes his plans.

"It's important to have a smooth handover and a smooth transition," said Tarbert. "It's obviously been a tremendous adventure and – I think – successful time in government … but I would like to return to the private sector in some relevant leadership role," he said.

Tarbert, 44, did not speculate on his replacement. Washington analysts say Democratic commissioners Rostin Behnam and Dan Berkovitz are the front-runners, and would likely take a tougher stance on the industry.

During his tenure at the CFTC, which began policing the over-the-counter derivatives or "swaps" market after it nearly toppled the financial system in 2008, Tarbert has led an unusually active rule-making agenda, said lawyers.

The agency has finalized 40 rules and proposed 21 more, according to data provided by the agency, while juggling practical and regulatory challenges created by the COVID-19 pandemic.

"Heath is a talented negotiator. During his time at Treasury as well as at the CFTC, he has been effective in enacting critical policies," Treasury Secretary Steven Mnuchin told Reuters in a statement.

Several of the completed rules stemmed from the 2008 financial crisis, including big, contentious changes such as limits on speculative physical commodities positions and capital requirements for non-bank swap dealers.

Some have been criticized by consumer advocates and Democrats for being too weak, while lawyers say others were rushed, resulting in problematic holes and snags.

"There's always a tension between getting stuff done, getting it done in a timely fashion, and getting it absolutely perfect," said Tarbert.

Generally speaking, however, Tarbert has avoided the partisan scrapping and pro-industry accusations that have dogged other Trump regulators, with 87% of his votes passing on a bipartisan basis, according to agency data.

"He did everything he could to bring consensus to the agency, but sometimes it's impossible," said Sheila Bair, the former chair of the Federal Deposit Insurance Corporation who has worked closely with Tarbert.

Tarbert's enforcement record has also surprised lawyers. In 2020, the agency imposed $1.33 billion in penalties, the third year-on-year increase, with a record 113 actions.

"I think that busts the myth that Republicans are soft on Wall Street," said Tarbert. Institutions should be treated "like adults" with reasonable regulation and supervision, he said. "There is no flexibility when people wantonly break the rules."