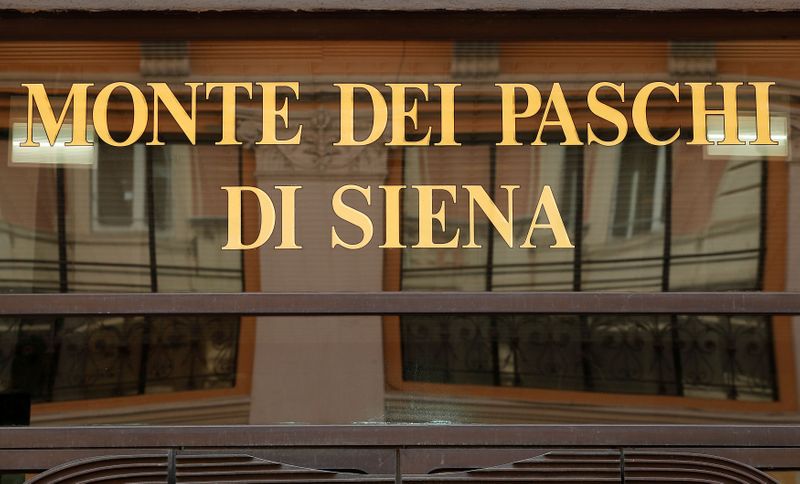 © Reuters. FILE PHOTO: A sign of the Monte dei Paschi bank is seen in Rome 2/2

By Pamela Barbaglia and Valentina Za

MILAN (Reuters) – Italy's government is working on a plan to take on about 14 billion euros ($17.3 billion) of UniCredit's non-performing loans to make a takeover of state-owned Monte dei Paschi more attractive for the country's second-biggest bank, sources said.

Bad loan manager AMCO, which is backed by Rome and ran by former UniCredit executive Marina Natale, is looking to hoover up a significant tranche of UniCredit's bad debt while also ridding Monte dei Paschi of its high-risk loans, two sources told Reuters on condition of anonymity.

The plan is part of measures being readied by the Treasury in order to press ahead with the sale of MPS, whose plight has come to symbolise Italy's long-running banking crisis.

Shares in UniCredit were up 6.3% after Reuters reported on the plan. Italy's Treasury, AMCO and UniCredit declined to comment.

The Treasury aims to have a range of solutions ready by the end of January, despite rifts within the ruling coalition which risk toppling the government.

It is working with advisers to tackle the complexities of a deal, including providing possible state guarantee to shield a MPS future owner from around 10 billion euros in legal claims which face the bank after decades of mismanagement.

"It won't be possible to resolve all the outstanding issues by the end of January, but there will be material progress in identifying the solutions that would eventually lead to a deal," one of the sources said.

The goal is to have a deal ready to be approved by UniCredit's annual meeting in April, another source said.

UniCredit has yet to sign a non-disclosure agreement to enter formal talks, three sources said, because it wants more reassurance that both the European Union and the European Central Bank will back the package of measures.

Discussions are ongoing despite CEO Jean Pierre Mustier's decision to step down in April at the latest over disagreements with the board.

UniCredit, which had shunned deals under Mustier, has set strict terms for a potential takeover and would only consider buying MPS if it did not affect its capital ratios.

If successful, the NPL sale would rank as one of Italy's biggest bad loan deals and would make the MPS acquisition more palatable for UniCredit's investors.

"If it goes ahead, this deal will make it easier to sell the MPS purchase to the market," the first source said, adding that AMCO would also hoover up another chunk of high risk loans from MPS totalling several billion euros.

To address the costly legal risks, the Treasury is working with its advisers on three options which would entail either a "guarantee scheme" or alternatively some kind of "insurance contract" with cash as collateral, one of the sources said.

Another option is a subordinated loan whose principal could be wiped off under certain circumstances, the source added.

Only just over half of MPS' legal risks stem from lawsuits, while the remainder relates to extra-judicial claims mainly from the bank's former controlling shareholder, local foundation Fondazione Monte dei Paschi di Siena.

Sources have said the foundation and MPS are discussing a settlement that would see 3.8 billion euros in damage claims being dropped in exchange for shares in the bank.

Rome spent 5.4 billion euros in 2017 rescuing the loss-making Tuscan bank, which now needs up to another 2.5 billion, giving fresh urgency to efforts to cut Italy's 64% stake as agreed with European Union authorities.

After warning its capital reserves would breach minimum thresholds in the first quarter, MPS must tell the ECB by the end of January how it plans to address the shortfall.