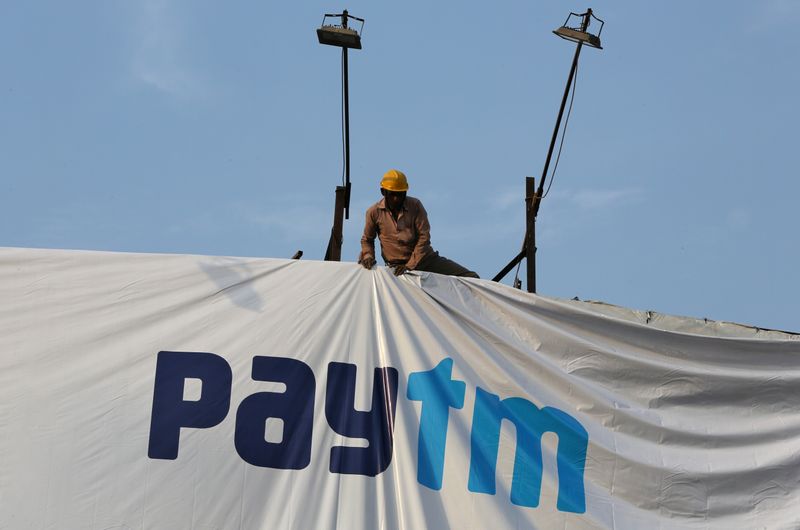 © Reuters. FILE PHOTO: A worker adjusts a hoarding of Paytm, a digital payments firm, in Ahmedabad 2/2

Financial details of the possible transaction have not been firmed up and Ant, the Alibaba-backed payments-to-consumer credit behemoth, has not launched a formal sale process yet, four people told Reuters.

Paytm, which is also backed by SoftBank Group Corp among others, was valued at about $16 billion during its latest private fundraising round a year ago. At that valuation, Ant's stake in the Indian firm is worth about $4.8 billion.

Both Ant and Paytm said that the information was incorrect. A Paytm spokesman said "there has been no discussion with any of our major shareholders ever, nor any plans, about selling their stake."

Ant's possible exit from Paytm would mark another reversal for the Chinese company hot on the heels of the dramatic suspension of its $37 billion stock listing last month, which would have been the world's largest.

It also would be a step back from its ambitions of becoming a global payments leader. Sources told Reuters in October that Ant was cutting its financial support to many of the overseas affiliated e-wallet firms.

The main trigger for Ant to consider the divestment of its stake in Paytm is the worsening diplomatic relations between India and China in the past few months, said the people, who declined to be named as the deliberations are confidential.

Relations between the countries are at a nadir, with troops locked in a border face-off in the western Himalayas for months after a clash in June in which 20 Indian soldiers were killed.

Since the clash India has tightened rules for investments from China and banned dozens of Chinese mobile apps, including from tech giants Tencent, Alibaba (NYSE:BABA) and ByteDance. It banned 43 more apps late last month.

"There is a growing realisation within Ant management that it would not be able to raise its stake in the company," one of the people with direct knowledge said, adding senior managers at Ant have discussed the idea recently.

Even so, Ant was in the middle of an investment review and it could still decide to shelve a divestment if it failed to get the desired valuation, he said.

Two other sources said that as a result of the review Ant could end up retaining a small stake in Paytm.

Indian start-ups are heavily funded by Chinese investors such as Alibaba and Tencent. Bankers have previously said they were looking to bolster their presence in the country with an aim to grow their revenue outside China.

Alibaba has invested over $4 billion in India so far and had plans to invest around $5 billion in 2021, which have now been put on hold, one of the sources said.

Alibaba did not respond to a request for comment.

Ant first invested in Paytm in 2015 and owns its 30% stake in the firm via its parent company, One97 Communications, according to Ant's initial public offering prospectus, which described the Indian firm as a major associate.

In addition to the tighter investment rules for Chinese companies in India, tougher competition is likely another factor behind Ant's calculations regarding Paytm, which is losing its dominance, two of the people said.

Online transactions, lending and e-wallet services have been growing rapidly in India, led by a government push to make the country's cash-loving merchants and consumers adopt digital payments.

That has led to the entry and expansion of Facebook-owned WhatsApp, Alphabet (NASDAQ:GOOGL) Inc's Google Pay, and Walmart (NYSE:WMT)'s PhonePe. Some domestic players are also expanding operations.