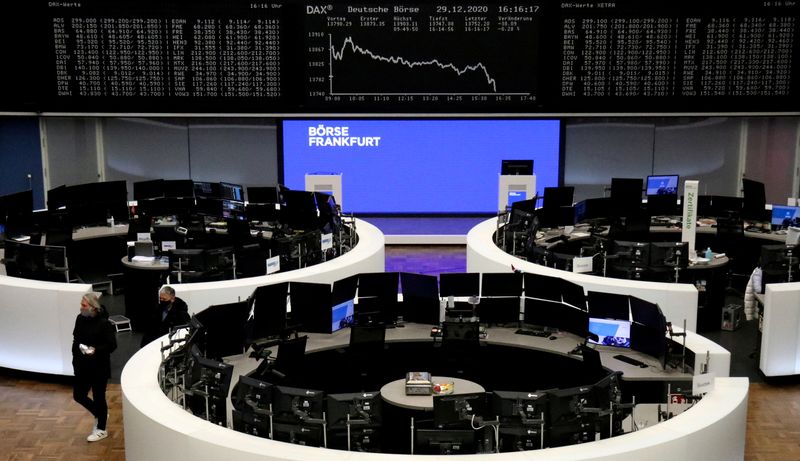 The pan-European STOXX 600 rose 0.2% to hover near a 10-month high hit in the previous session.

German DAX slipped ahead of an early close on Wednesday, with most markets in the region being subdued due to thin volumes in the final week of the year.

AstraZeneca rose 0.8% after Britain became the first country in the world to approve its vaccine jointly developed with Oxford University.

That came as an additional boost for UK markets after Britain and EU sealed a Brexit trade deal last week, averting a chaotic departure from the bloc at the end of year. The British parliament is expected to debate and pass the deal later in the day.

"There are some things happening out there that suggests that risk appetite is strong," said Russ Mould, investment director at AJ Bell.

"If you're looking through to 2021, we're hoping that the vaccines will begin to counteract the effect of the pandemic, and hopefully economic activity will begin to normalise."

Spanish lender Unicaja rose 2.7%, while Liberbank was down 3.1%, after they announced an all-in share deal that would create the country's fifth-biggest bank.

The deal marks an acceleration of the sector's consolidation after the approval of a merger between state-owned Bankia and Caixabank earlier this month.

The wider banking index rose 0.8% but is among the worst performing sectors this year alongside energy, as mounting bad loans due to the impact of the pandemic and record low interest rates hammered the appeal for the sector.

Travel and leisure stocks rose 0.9% as the rollout of COVID-19 vaccines across the continent took the edge off a surge in infection rates that is driving many countries to consider extending lockdowns.