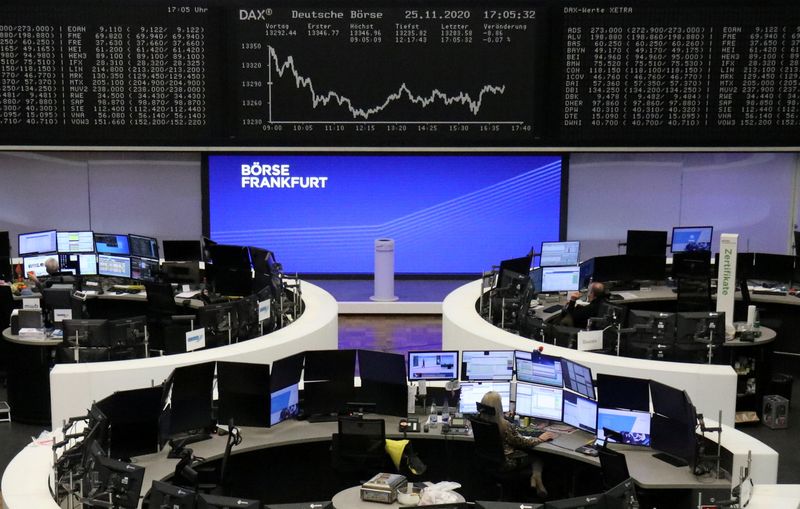 (Reuters) – European shares slipped on Monday as rising tension between the United States and China sapped some appetite for risky assets, while a battered pound on growing fears of Brexit without a trade deal buoyed London's blue-chip index.

After adding about 14% over the last five weeks, the pan-European STOXX 600 index fell 0.7% with banks leading losses as euro zone bonds yields fell.

Finance-heavy indexes in Spain and Italy slipped more than 0.8%, while France's CAC 40 fell 1% after scaling a more than nine-month high on Friday.

Germany's trade-sensitive DAX index lost 0.8% after Reuters exclusively reported that United States was preparing to impose sanctions on at least a dozen Chinese officials over their alleged role in Beijing's disqualification of elected opposition legislators in Hong Kong.

"U.S.-China relations was the hot topic last year and at the start of this year, so any return to that… is going to weigh on markets as they pull back from some very high levels," said Connor Campbell, a financial analyst at Spreadex.

The news cast a shadow on data that showed German industrial output rose much more than expected in October. Adding to the gloom, the Ifo institute said production expectations for Europe's largest economy have deteriorated for the coming months.

With Britain preparing to roll out the Pfizer/BioNTech COVID-19 vaccine this week, London's FTSE 100 rose 0.3% after swinging between losses and gains in early trade. Consumer and healthcare stocks led gains.

The pound took a beating as negotiators struggled to reach consensus on a post-Brexit trade deal.

British Prime Minister Boris Johnson and European Commission President Ursula von der Leyen are due to hold another call on Monday evening in the hope that stubborn differences over fishing rights in UK waters, fair competition and ways to solve future disputes will have narrowed by then.

"If we don't get a signal by the end of today, there are talks that it's sort of a de-facto no-deal Brexit," Campbell said.

Failure to secure a deal would clog borders, upset financial markets and disrupt delicate supply chains across Europe and beyond.

Among individual stocks, upbeat trading updates from Games Workshop and Pandora (OTC:PANDY) sent their shares to the top of STOXX 600, while UK homebuilders led declines.