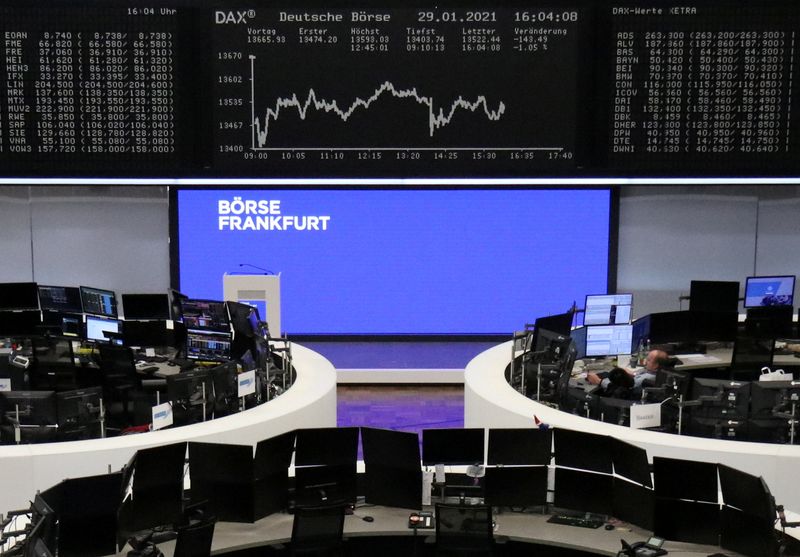 (Reuters) – European stocks rose on Friday, tracking an upbeat sentiment from Wall Street on hopes of a faster global economic recovery, while Frankfurt shares lagged after data showed a decline in industrial orders.

The STOXX 600 gained 0.4% and was set for its longest winning streak since late December. The index was also up 3.7% for the week, on track for its best weekly performance since November.

Markets around the world were higher on expectations of a large stimulus by U.S. President Joe Biden's administration, while a pause in the Reddit-driven retail trading frenzy also helped lift investor sentiment. [MKTS/GLOB]

Germany's DAX index was flat after data showed orders for German-made goods fell more than expected in December, ending a seven-month streak of positive data as restrictions to contain the COVID-19 pandemic dragged down demand from other euro zone countries.

"Today's data shows that stricter lockdown measures since mid-December, as well as the Christmas break, have finally hit German industry … but at face value, this only looks like a temporary breather," strategists at ING wrote in a note.

Most European sector indexes were trading higher, with banks, travel and leisure and technology shares leading the advance, suggesting a risk-on trading environment.

Sanofi (NASDAQ:SNY) SA gained 2% as the French drugmaker said it aimed to grow earnings per share this year after posting stronger-than-expected quarterly results.

Swedish builder Skanska fell 3.2% on cutting its outlook for the Swedish non-residential building market as it posted slightly lower quarterly profits than expected, while proposing an extra dividend to shareholders.

Shares in Vinci rose 5.3% and were the top boost to the STOXX 600, after Europe's biggest construction and concessions company beat full-year core profit forecasts, helped by some recovery in its contracting business.

Finnish oil refiner Neste fell 5.2%, to the bottom of the STOXX 600, after it issued a weak first-quarter outlook and unexpectedly cut dividend.