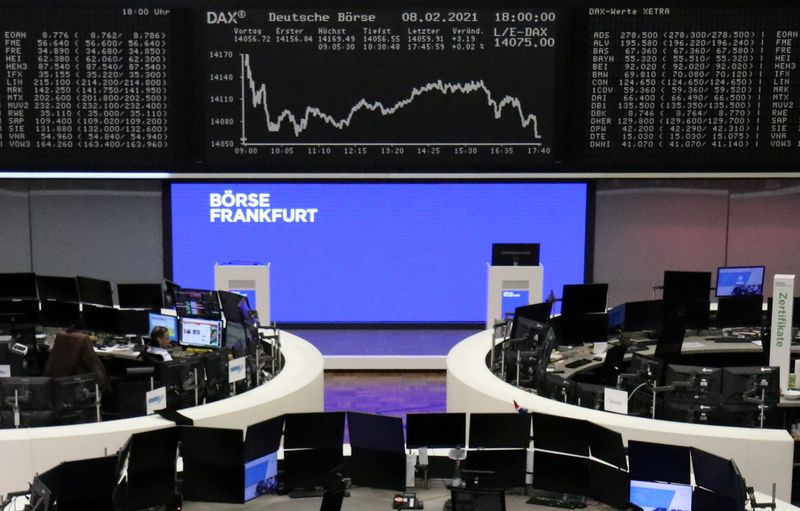 (Reuters) – European shares dipped on Tuesday as a recent rally powered by hopes of a swifter global economic recovery and vaccine roll-outs showed signs of cooling, while shares in French oil major Total rose after its earnings recovered in the fourth quarter.

Total SE rose 1.9% after the company said its earnings recovered in the fourth quarter as oil prices stabilised, although a hit from writedowns on assets due to the COVID-19 pandemic plunged it to a $7.2 billion net loss for 2020 as a whole.

The STOXX 600 index fell 0.1%, after gaining nearly 4% so far this month against the backdrop of steady vaccine roll-outs globally and expectations that a massive stimulus package will soon be passed by U.S. lawmakers.

However, analysts say international investors are looking towards European equities as an attractive investment with corporate earnings showing signs of improvement and on multi-billion dollar deal-making activity recently.

"There is this view that Europe is getting a bump in business investment which I think is right, because when that consumer spending is unleashed, it will lift corporate profits, which have so far been the field indicators of business investments," said Mike Bell, global market strategist at J.P. Morgan Asset Management.

Germany's DAX index was down 0.2% even as data showed German exports rose in December as robust trade with China and the United States helped.

HeidelbergCement (DE:HEIG) gained 0.4% after the world's No.2 cement maker identified five assets to sell in a review of its business and had a good start to 2021, its chief executive officer told Reuters.

Nestle rose 0.5% after the company said its Gerber baby cereal products made and sold in China are safe and it had reported to authorities an association that advised its members, in a post on social media, to stop selling the products.

French reinsurer Scor rose 2.8% on reporting a rise in its renewals of contracts and premiums, and added it was sticking to its earlier financial targets for growth and profits.

TUI Group shed 0.6% after the world's biggest holiday company sunk to a 699 million euros ($844 million) loss in its first quarter.