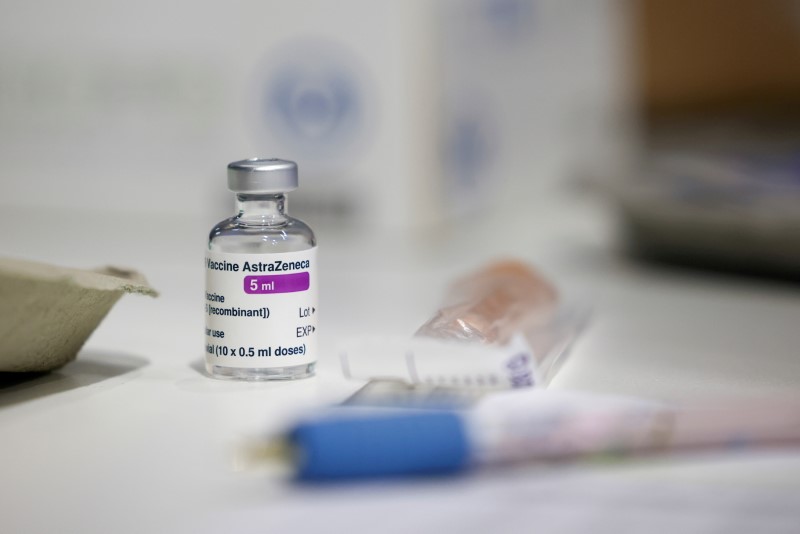 (Reuters) -Europe’s drug regulator on Friday identified another rare blood condition as a potential side effect of AstraZeneca (NASDAQ:)’s COVID-19 vaccine and said it was looking into cases of heart inflammation after inoculation with all coronavirus shots.

The European Medicines Agency’s (EMA) safety committee said that capillary leak syndrome must be added as a new side effect to labelling on AstraZeneca’s vaccine, known as Vaxzevria.

People who had previously sustained the condition, where fluids leak from the smallest blood vessels causing swelling and a drop in blood pressure, should not receive the shot, the EMA added.

The regulator first began looking into these cases in April and the recommendation adds to AstraZeneca’s woes after its vaccine was associated with very rare and potentially lethal cases of blood clotting that come with a low platelet count.

Last month, the EMA had advised against using the second AstraZeneca shot for people with that clotting condition, known as thrombosis with thrombocytopenia syndrome (TTS).

The committee reviewed six validated cases of capillary leak syndrome in people, mostly women, who had received Vaxzevria, including one death. Three had had a history of the condition.

More than 78 million Vaxzevria doses have been administered in the European Union, Liechtenstein, Iceland & Norway and Britain.

Britain’s regulator, the MHRA said on Thursday it had received 8 reports of capillary leak syndrome in the context of more than 40 million doses of the AstraZeneca vaccine given, and currently does not see a causal link.

Separately, the EMA said it was continuing its probe into cases of heart inflammation known as myocarditis and pericarditis, primarily following inoculation with the Pfizer/BioNTech and Moderna (NASDAQ:) mRNA shots, but also after the J&J (NYSE:) and AstraZeneca vaccines.

U.S. health officials said on Thursday they had registered a higher-than-expected number of heart inflammation cases in young men who received a second dose of the mRNA shots, though a causal relationship could not be established.

Israel’s Health Ministry said this month it had found a likely link to the condition in young men who received the Pfizer/BioNTech shot.

Both Pfizer (NYSE:) and Moderna have acknowldged the observations but said a causal association with their vaccines has not been established.

BioNTech said adverse events, including myocarditis and pericarditis, are being regularly and thoroughly reviewed by the companies and regulatory authorities.

“More than 300 million doses of the Pfizer-BioNTech COVID-19 vaccine have been administered globally and the benefit risk profile of our vaccine remains positive.”

The United States and Israel have been months ahead of the EU in vaccinating men below 30, who are particularly prone to heart inflammation, giving them potentially more cases to analyse.