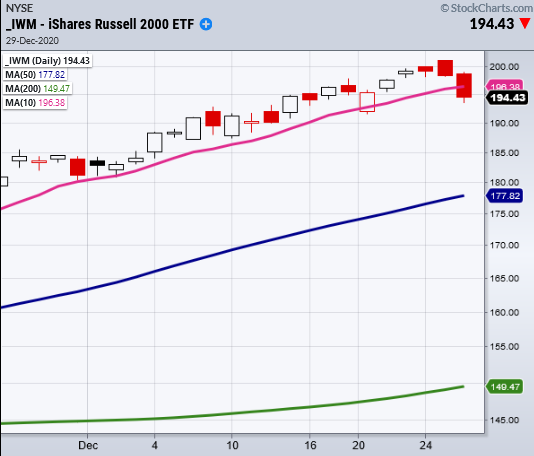 Strength picks up in Food commodities as securities struggle amid final stimulus negotiations.

The situation is now in the Senate’s hands to pass or decline the $2000 dollar stimulus checks.

A large amount compared to the original $600 proposed in the bill.

This looks to be the final hold-up for the $900 billion dollar bill.

While some call the amounts given so far too late and too little, anything helps families and business owners who have struggled to keep their operations afloat thus far.

Large cap indices held short term while the Russell 2000 small caps (IWM) broke below its support of the 10-day moving average at 196.38.

If IWM continues lower, the next level to watch is for 12/21 low of 191.48 to hold. Perhaps even more important is that the transportation sector, iShares Transportation Average ETF (NYSE:IYT), held 219.25 by the close.

While securities decide where to head next, food commodities took another step higher.

The Agricultural Fund ETF (NYSE:DBA) has seen steady growth in the past weeks as it holds well over the 10-DMA.

The next test will be the $16.00 area or the highs of mid-February.

Other commodities, for instance corn (CORN) and sugar (CANE), have also participated in a solid performance. CANE yesterday broke to multi-month highs while corn broke a milestone price of $15.

Furthermore, going into the next year with the possibility of rising inflation, watching key levels in food will give us an idea into the health of a key market sector and supply chains.

Even water (PHO) has increased under the world’s changing circumstances with shortages becoming more frequent.