If it weren’t for two words on a piece of paper, this would probably be a chaotic day on Wall Street. However, President Donald Trump put his signature on the stimulus and government funding bill last night, arguably calming the waters a bit.

With Trump’s autograph, the government will stay open and most Americans will receive $600 checks. It’s a much smaller stimulus than the one last spring, so it’s unclear how much impact it might have on the economy. Stocks jumped on the news, but didn’t go too crazy, maybe because so much of this has been built in for weeks.

The Washington drama isn’t necessarily over. There’s still a vote this week where Congress will attempt to override Trump’s veto of a defence bill that passed with wide bipartisan support. Defense-related stocks like Lockheed Martin (NYSE:LMT) and Northrop Grumman (NYSE:NOC) have been under a bit of pressure the last couple of months, but there’s more behind that than just this disputed bill. That said, an override of the veto might help the sector. The House vote is scheduled for today and the Senate vote is tomorrow.

Aside from Washington, this could be one of those dull end-of-the-year weeks with thin volume and little news. There is some data coming down the pike (see more below,) including pending home sales for November on Wednesday. We’ll preview the numbers tomorrow.

Also, keep in mind it’s a short week (markets are closed Friday) and even with the potential Washington fireworks, volume on Wall Street could be light. That often means bigger swings one way or the other, so anyone going into or out of stocks in the coming four days might want to take extra caution. The Cboe Volatility Index (VIX) softened ahead of Christmas, but still hasn’t taken out 20 on the downside since last February. Worries about the chance of another jump in COVID cases after the holidays could have some investors on edge over the next few days and weeks.

Another thing you might want to track this week is updates on holiday shopping. Going into the holiday season, the National Retail Federation predicted retail sales would rise between 3.6% and 5.2% from a year ago. Unfortunately, early word is they didn’t. Instead, sales rose 3% between Oct. 11 and Dec. 24, according to Mastercard (NYSE:) SpendingPulse. The good news, so to speak, is that even though people were stuck at home in many cases, that didn’t stop them from buying gifts and other items. Online sales rose 49% from a year earlier.

Notice the early start of that date range. The survey took into consideration that shopping season began earlier than usual due to retailers starting their sales in October amid the pandemic. While 3% retail spending growth isn’t as good as the 5% some economists had predicted, it’s still growth—something many hadn’t expected with the economy so weak.

We’ll get more color on holiday shopping trends in January when we start hearing from retailers reporting quarterly earnings. Apple (NASDAQ:AAPL) and Amazon (NASDAQ:AMZN) are definitely ones to look out for before the big box retailers begin reporting in February. Also prepare for the monthly December retail sales report, expected Jan. 15.

Now, to paraphrase a long ago U.S. politician, no one in the markets will have Brexit to kick around anymore. Meaning that with uncertainty over the negotiations out of the way, people can’t blame fears of a “no-deal” Brexit for market weakness. Instead, many could be waiting to see how the deal works in practice over the coming weeks and months, which brings uncertainty of its own. The initial market reaction is playing out right now, and one way to monitor it is to keep an eye on the dollar/pound relationship and bonds. The British pound initially rallied then fell slightly after the news.

European bonds rose on the deal news, a potential sign of investors getting defensive. Strength in European bonds can often spill into the U.S. bond market, threatening to keep a ceiling on yields. We’ll have to watch and wait, because a day or two isn’t a trend. If Brexit ultimately strengthens the pound and softens the dollar, it could also lead to higher crude prices, an analyst told Barron’s.

For something potentially positive out of Brexit, consider that with no deal, it would have been tough for President-elect Joe Biden to negotiate terms of a U.S.-U.K. trade relationship once he takes office, Barron’s reported. The deal conceivably puts U.S.-U.K. trade in a more positive light moving forward.

As we noted last week, it’s very hard to say that Brexit is fully built into markets. The reason being is that it’s never been done before. Nobody’s left the European Union before. Short term this is great news because it removes a bit more uncertainty. But long term we don’t know all the ramifications of Brexit. It’s likely to be back in the headlines in Q1. 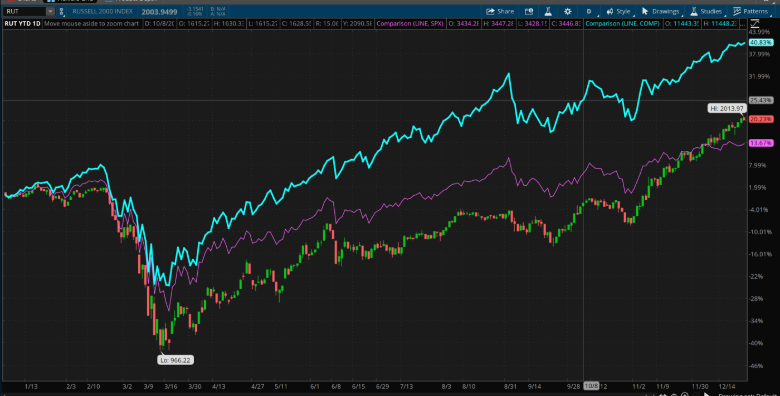 CHART OF THE DAY: TECH SHINES IN ’20. Arguably, few have gone broke investing in Technology over the last few years, and 2020 was no exception. As this year-to-date chart shows, the Nasdaq (COMP—blue line) is up more than 40% going into the final week of 2020, while the Russell 2000 (RUT—candlestick) small-cap index recently moved ahead of the S&P 500 Index (SPX—purple line). Later this week, we’ll break down how specific parts of Tech—including FAANGs and semiconductors—did in comparison to Tech overall. Data Sources: FTSE Russell, S&P Dow Jones Indices, Nasdaq. Chart source: The thinkorswim® platform from TD Ameritrade (NASDAQ:AMTD). For illustrative purposes only. Past performance does not guarantee future results.

A Trickle of Data: Some people might be taking a week away from the market, but that doesn’t mean a week off from data. Pending home sales is probably the most high-profile report due this week, while Chicago PMI for December also bows next Thursday. The Chicago PMI, which measures regional industrial activity, fell slightly to 58.2 in November but remained well above the 50 level that signifies expanding manufacturing activity. It’ll be interesting to see if it sinks in December after the recent run of mixed data.

Generally, economic data hasn’t been hitting the cover off the ball lately, but it’s being largely discounted. It seems like the rollout of the vaccine for the coronavirus is starting to go pretty well, so that’s what’s giving people a lot of hope. At the end of the day, that still remains the top story.

Breaking the China? It’s been a tough quarter for Chinese mega-cap Alibaba (NYSE:BABA) and its co-founder Jack Ma. The company’s shares fell double-digits in a single day late last week and are down about 30% since Sept. 30 amid pressure from the Beijing government. According to BABA’s competitors and some merchants, the company has punished certain brands selling goods on both Alibaba and its rival platforms, The Wall Street Journal reported. Last Thursday, Beijing’s top market regulator, the State Administration for Market Regulation, said it had launched an antitrust investigation into BABA.

Seeing BABA shares reeling and rivals like JD.com (NASDAQ:JD) also levelling off after a long upward run raises questions about how overseas stocks might do this coming year. Many analysts say the U.S. market is fully or even over-valued, and that a weak dollar might help foreign stocks. However, if you’re tempted to invest in China, the last few months might be a case study of how quickly things can change in a country where the government’s sudden announcements can potentially put major pressure on a stock. Unlike what we’ve seen over the last year with U.S. pressure on alleged anti-competitive practices by Alphabet (NASDAQ:GOOGL) and Facebook (NASDAQ:FB), Beijing can bring down a decision suddenly and without any chance for a company to defend itself. This doesn’t mean don’t invest overseas, but know what you’re getting into.

What’s New in 2021: Speaking of knowing what you’re getting into, that definitely applies to initial public offerings (IPOs), which have had a banner year despite the pandemic. More appear on tap to begin 2021, MarketWatch reported. We’ll get to those in a minute. First, the 2020 tally with just a few days left in the old year: 183 traditional IPOs and 242 SPAC (special purpose acquisition company) deals raised slightly more than $150 billion in total, MarketWatch said, citing data from PricewaterhouseCoopers. That made 2020 the biggest IPO year in terms of deal count and capital raises since the 1990’s. Why the flurry of IPOs? It might have something to do with the low interest rate environment, analysts have told the media.

How do you top that? It’s not necessarily going to happen, but 2021 could be another year packed with IPOs, partly because so much cash remains on the sidelines and the stock market is so highly valued people might be looking for fresh companies to invest in. If that describes your thinking, consider treading lightly. The main lesson is not to buy a stock just because you’re familiar with or love the product. Dig deep into the IPO’s paperwork before deciding whether to buy, and make sure it sounds like they have strong leadership and a plan to become profitable if they aren’t already. Also, these IPOs can sometimes (well, to be fair, often) crash and burn, so consider going in a step at a time rather than all at once.