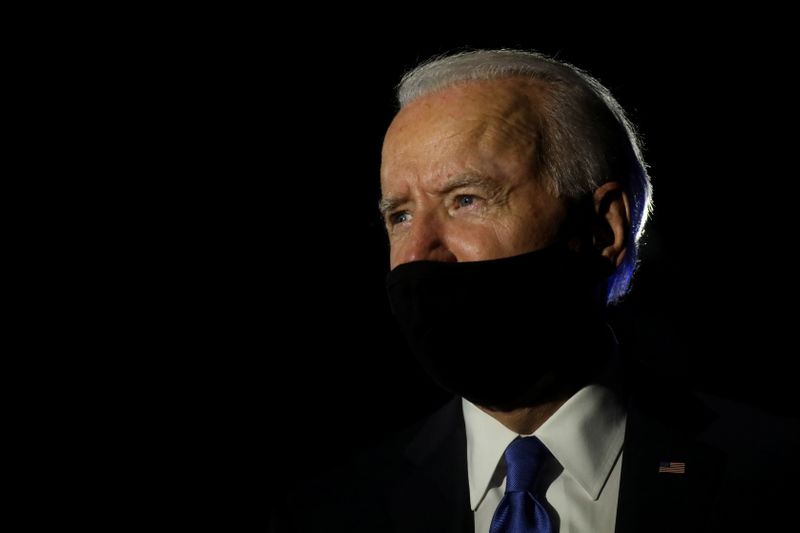 Investing.com – The Dow closed at a record high Friday, after staging a comeback as President-elect Joe Biden talked up his spending-fueled plans to boost the recovery at a time when the virus continues to spread.

Biden restored hopes for further stimulus, insisting that the focus should be on budget spending to boost growth. "We should be investing in deficit spending in order to generate economic growth," Biden said.

Biden comments arrived on the heels of confusion over West Virginia Democratic Senator Joe Machin's remarks, which had earlier left market participants worried that plans to boost stimulus checks under a Democratic-controlled Congress would meet resistance.

Manchin was reported to have shot down the idea of boosting checks to $2,000, but later claimed his comments in The Washington Post were mischaracterized. Manchin was quoted as saying "absolutely not" when quizzed about backing an idea to boost stimulus checks to $2,000, but the West Virginia senator said this was in response to whether checks should be the first priority.

In another boost to stimulus optimism, Federal Reserve Deputy Chairman Richard Clarida signaled that the central bank was likely to remain in a holding pattern on bond purchases this year.

The need for further stimulus was highlighted by a wobble in the labor market following an unexpected drop in jobs in December.

The U.S. economy lost 140,000 jobs last month, confounding expectations for a gain of 71,000, but economists suggested the near-term wobble in the economy will likely be overlooked as vaccines are deployed and Democrats are likely to roll out more stimulus.

The loss of jobs broke the streak of seven straight months of gains since the decline over March and April, but markets are "likely looking through near-term considerations as a transitory hit in favor of longer-term upside risk tentatively reinforced by vaccines and ‘blue wave’ fiscal policy considerations," Scotiabank Economics said.

Financials were weighed down by a fall in banking stocks ahead of their earnings slated for next week.

Micron Technology Inc (NASDAQ:MU), which had hit a more than 20-year intraday high on better-than-expected first-quarter earnings and guidance, fell 2% following a reversal in chip stocks.

In other news, Tesla (NASDAQ:TSLA) continued to rack up gains, rising 8% to hit a record high, taking its market cap above $820 billion, with the electric automaker topping Facebook's $763 billion valuation.