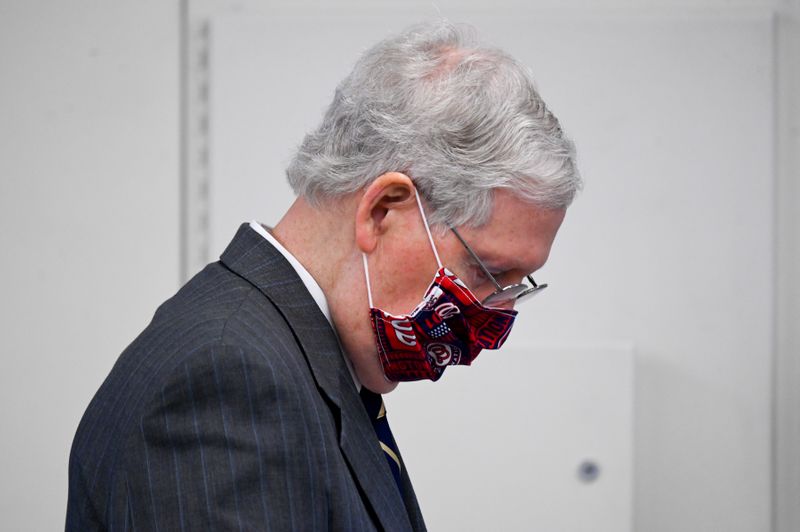 Investing.com – The Dow cut its losses on Friday, as slim hopes for a stimulus deal before year-end were kept alive after the Senate passed a one-week spending bill, buying more time to break the stalemate on Capitol Hill.

The bill was passed by 84-13 votes in the Senate and 335-78 votes in the House – a large enough majority (over two-thirds) to overturn a possible veto from President Trump.

But efforts to break the deadlock in stimulus talks have suffered a setback after Senator Majority Leader Mitch McConnell signaled that Republicans would be unwilling to back some parts of the $908 billion bipartisan stimulus package, including the $160 billion support for local and state governments.

Still, there remains a sliver of hope as lawmakers bought more time to negotiate after the Senate passed a one-week government funding extension Friday.

The need for further stimulus to prop-up the U.S. economy has been exacerbated by a surge in the spread of Covid-19 that has forced parts of the country to impose fresh restrictions.

New York Gov. Andrew Cuomo said that indoor dining in New York City will close from Monday, marking a blow to restaurant operators in the city less than two months after they resumed activity.

But the prospect of a vaccine rollout as soon as Monday has helped to support expectations that there is finally light end of the pandemic tunnel.

The Food and Drug Administration on Friday pledged to move quickly toward grating emergency use authorization for the Pfizer-and-BioNTech COVID-19 vaccine.

Health and Human Services chief Alex Azar said he expects the vaccine to be available in the U.S. by Monday.

Energy stocks were among the biggest decliners as investors appear to take profit following a strong week of gains for the sector amid bets on a vaccine-led rebound in crude demand.

Financials also continued to the broader market malaise, down more than 1%, paced by more than 3% decline in Capital One (NYSE:COF) and Citigroup (NYSE:C).

Mastercard (NYSE:MA), meanwhile, fell more than 1% after losing in its appeal to U.K. Supreme Court against an $18.5 billion class-action lawsuit that alleges the company overcharged more than 46 million customers.

In tech, chip stocks were down more than 1% led by weakness in Qualcomm, and Broadcom (NASDAQ:AVGO), despite the latter delivering quarterly results that topped estimates.

Qualcomm (NASDAQ:QCOM) slipped more than 7% on fears about a loss business from Apple (NASDAQ:AAPL) after Bloomberg reported that Apple is starting to make its own cellular modem to be used in future devices.

In other news, Walt Disney (NYSE:DIS) jumped 13% after upgrading its forecast on paid subscribers for its direct-to-consumer services to a range of 300 million to 350 million by 2024. The rosier outlook comes after the company said its paid subscribers had reached 137 million, topping its previous guidance.