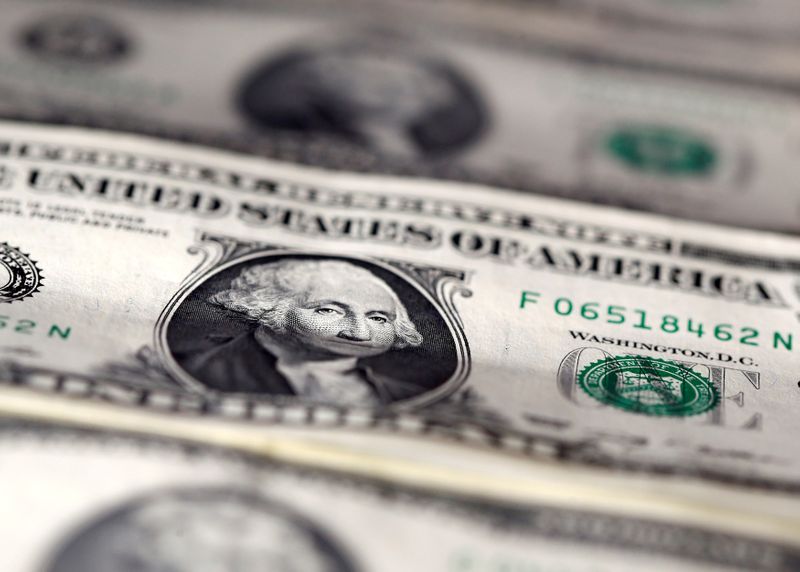 © Reuters. U.S. dollar notes are seen in this picture illustration

TOKYO (Reuters) – The dollar headed for its best weekly gain in three months on Friday, lifted by growing confidence that the U.S. economic recovery will outpace global peers.

The dollar index touched a new two-month high in Asian trade amid signs of resilience in the labour market, with closely watched nonfarm payroll figures due later in the global day.

The greenback also renewed highs versus the euro and yen.

"The U.S. economy is exceptionally strong relative to other countries, causing dollar short covering," said Tohru Sasaki, J.P. Morgan's head of Japan market research in Tokyo, pointing to employment and manufacturing indicators as well as the pace of vaccinations.

The current bout of dollar strength could continue for "several weeks," he said, but the picture is murkier thereafter as Europe and Asia catch up with immunisations and the Federal Reserve's continued ultra-easy monetary policy caps a rise in long-term U.S. yields.

The dollar index drifted slightly higher to 91.576 from Thursday, touching 91.60 for the first time since Dec. 1.

The gauge has risen every day this week and is on track for a 1.1% weekly advance, the most since Nov. 1 and building on a 0.3% rise the previous week.

The greenback has been supported by a rise in longer-term U.S. Treasury yields, which came as traders positioned for massive fiscal spending.

Analysts and investors are weighing whether dollar strength this year is a temporary position adjustment after a 7% drop for the dollar index in 2020, or a longer-lasting shift away from dollar pessimism.

There are potentially a lot of dollar shorts to cover, particularly against the yen, where hedge funds had racked up their biggest bearish bets since 2016.

Westpac strategists see Europe's vaccine rollout accelerating by the end of this quarter, which, coupled with the Fed's commitment to ultra-loose monetary policy, will put pressure back on the dollar.

"DXY upside potential is living on borrowed time," they wrote in a note, referring to the dollar index. "Sell DXY into 92."