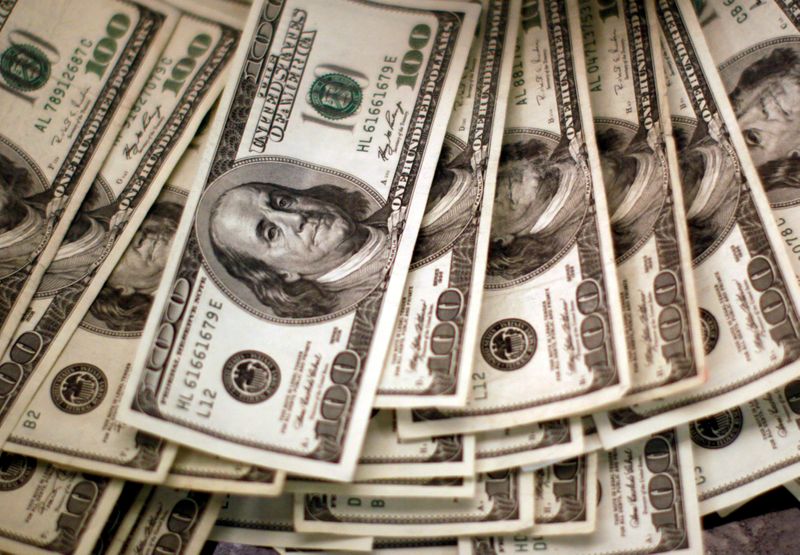 © Reuters. FILE PHOTO: FILE PHOTO: U.S. dollars are counted out by a banker at a bank in Westminster

SYDNEY (Reuters) – The dollar was under pressure on Tuesday, after closing out its worst month since July with a little bounce and as investors reckon on even more U.S. monetary easing.

The risk-sensitive Australian and New Zealand dollars clawed back some of Monday's losses, each rising roughly 0.2% early in the Asia session, although both remained just below milestone peaks hit a day ago.

The euro rose 0.1% but kept shy of $1.20, while sterling held on to gains made against the dollar as traders cling to hopes for a Brexit trade deal before the year's end.

Even worries about rising coronavirus cases have not offered too much support to the greenback, as speculation grows that the Federal Reserve might act to support the economy through a tough winter before vaccinations can turn the tide on the pandemic.

"There's a general view that there'll be something in the December meeting…given there's no real fiscal development in the last few months," said BNZ senior markets strategist Jason Wong.

The Fed meets to set policy on Dec. 15 and 16, though before then – on Tuesday and Wednesday – Fed Chair Jerome Powell will appear before Congress and his remarks will be closely watched for any clues as to the next moves.

The policymakers gather as authorities mull approving two effective vaccines, developed by Pfizer (NYSE:PFE) and Moderna (NASDAQ:MRNA) for distribution, but as surging virus cases put the brakes on the U.S. economic recovery.

Dallas Fed President Robert Kaplan said on Monday that difficult months lie ahead. "We're bracing ourselves here," he said, adding that the central bank is open-minded about shifting or even expanding its bond buying programme.

"We are going to have to figure out whether it's in the December meeting or a future meeting," he said.

Against a basket of currencies the dollar was steady at 91.942. The safe-haven Japanese yen held its ground at 104.33 per dollar.

Elsewhere in Asia, the South Korean won, which is up more than 7% on the dollar since September, recouped half of a 0.4% drop made on Monday. The Chinese yuan was firm in offshore trade following solid economic data on Monday.

The Reserve Bank of Australia announces the outcome of its final policy meeting for the year at 0330 GMT, though traders expect no changes and few surprises. European inflation figures and U.S. manufacturing data is due later on Tuesday.

Britain and the European Union also warned each other on Monday that time was running out to reach a Brexit trade deal, though investors remain hopeful and have kept the pound at $1.3337 and 89.48 pence per euro.