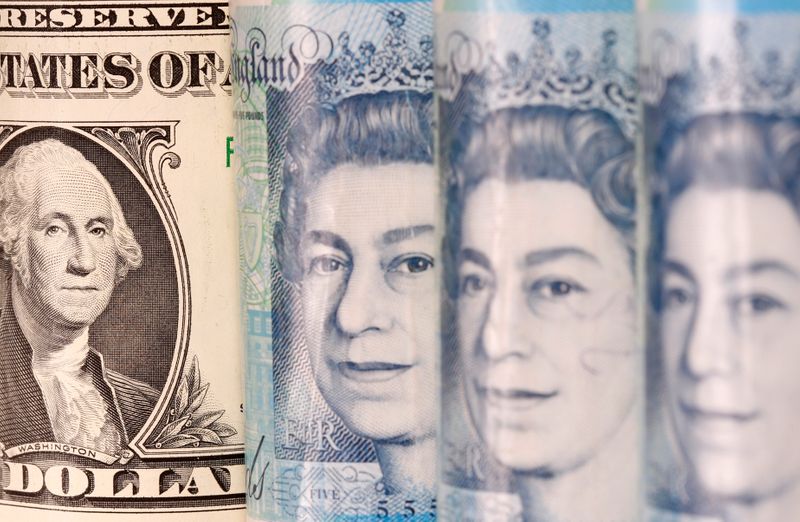 © Reuters. Pound and U.S. dollar banknotes are seen in this illustration

By Hideyuki Sano and Kevin Buckland

TOKYO (Reuters) – The dollar started the week on the back foot on Monday after soft U.S. jobs data only solidified expectations of a fresh economic package, while the British pound eyed last-ditch trade talks between the United Kingdom and European Union.

Friday's U.S. jobs data showed non-farm payrolls increased by 245,000 last month, the smallest gain since May, in a sign the jobs recovery is losing momentum on the third wave of coronavirus infections.

Yet traders perceived the data as putting pressure on Washington to pass a new round of stimulus to help the coronavirus-battered economy, keeping overall risk appetite intact and capping the U.S. dollar against riskier currencies.

"When risk appetite is in a good place, like it is now, demand for the U.S. dollar is going to be weaker," said Ray Attrill, head of foreign exchange strategy at National Australia Bank (OTC:NABZY) in Sydney. "Further dollar depreciation is baked in the cake."

Talks aimed at delivering a fresh infusion of coronavirus relief gathered momentum in the U.S. Congress on Friday, as a bipartisan group of lawmakers worked to put the finishing touches on a $908 billion bill they hope to get through this week.

The U.S. Federal Reserve is unlikely to rush to ramp up stimulus at its meeting next week, with Chicago Federal Reserve Bank President Charles Evans on Friday saying it would take until springtime to see the effects of a vaccine roll-out and gauge the economic trajectory.

Chinese policymakers are comfortable with the yuan's rise as the country's economic rebound accelerates and the central bank gives the market greater leeway in setting the currency's value, sources told Reuters.

The yuan, also known as the renminbi, moved little after data showing China's exports rose at the fastest pace in nearly three years in November.

Sterling traded little changed at $1.3422, stepping back from 2 1/2-year high of $1.3540 touched on Friday as investors looked to talks between Britain and the EU this week to avert a chaotic parting of ways at the end of the year.

Earlier it fell to as low as $1.3360 after weekend talks stalled on three thorny issues.

British Prime Minister Boris Johnson and European Commission President Ursula von der Leyden are due to hold a call on Monday evening in the hope that, by then, differences over fishing rights waters around the United Kingdom, fair competition and ways to solve future disputes will have narrowed.

"While it is hard to predict how the negotiations will go, I suspect sterling will be well-supported unless we have a complete breakdown in the talks," said Shinichiro Kadota, senior currency strategist at Barclays (LON:BARC) Capital in Tokyo.