If things get choppy today, you can probably blame the Fed.

Its meeting gets under way soon and we could have a bit of turbulence between now and tomorrow afternoon when Fed Chairman Jerome Powell addresses the media. Everyone is waiting pretty much on the edge of their seats to hear what, if anything, Powell might have to say about inflation. More on that below.

Volatility barely changed this morning, and major indices registered mixed overnight performances. Things are on a bit of a roll, however, with the S&P 500 Index closing higher the last five sessions. Earlier this year we had a “six-peat,” so we’ll see today if that gets matched. We have a lot of momentum now and we’ll see if it continues.

Crude has had an upward streak of its own this year, but yesterday and today some pressure developed. Prices fell below $65 a barrel this morning as stockpiles rose and demand worries grew following a virus surge in parts of Europe. Tomorrow’s U.S. supply data could be interesting after a couple weeks of huge spikes driven partly by refinery outages following the freeze in Texas last month.

That same February freeze might have iced retail sales last month. They fell 3% after a massive 6.3% rise in January. This was by far the worst retail sales performance since last April when COVID first gripped the economy. Going into the report, there’d been some hope that online sales might make up for some of the possible slide in brick-and-mortar sales, but that didn’t appear to happen.

Stock index futures pulled back after the data and may continue to see some pressure, but keep things in perspective. It’s one data point for one month, and it was a very weird weather month. Other economic data has been mostly solid lately.

Connecting The Dots As Fed Gathers

The Fed meeting starts today and wraps up at 2 p.m. tomorrow with a statement, followed by Powell’s press conference. Analysts aren’t expecting any rate moves, in spite of rising bond yields that some investors worry might be the first sign of inflation, and rising import prices in February might add to those concerns.

Instead, Powell and company might hold the fort and warn that although there could be some price pressure developing, they don’t expect anything earth shattering. That’s been the message the last few weeks, and not just from Powell. Other Fed officials have said basically the same. They added we’re a long way from the Fed needing to ease its accommodative policy.

That’s why tomorrow’s “dot-plot” showing where Fed officials see rates going over the next few years might be more interesting than it was, say, last fall when the 10-year Treasury yield was microscopic and few economists saw much to cheer about from a U.S. growth perspective.

Since then, the yield is up about 60 basis points, leading some to speculate on the “dreaded i-word.” The inflation equation had many investors nervous the last few weeks, but that seems to be fading a bit. See more below on how the Fed’s dot plot may have changed since it was last published. The yield fell to just below 1.6% this morning but isn’t far off one-year highs. Going into the Fed meeting, we have a 10-year yield that’s risen six weeks in a row.

It may not be too original, but if you’re looking for a reason the market scampered to new all-time highs Monday, “reopening optimism” isn’t the worst explanation.

This came despite signs of more virus trouble in places like Italy and Brazil. Instead, people seem more focused on the domestic picture, where the vaccination pace has jumped 40% over the last month to 2.3 million a day, according to The New York Times. Hopes that vaccine supplies will be enough for anyone who wants one by May could also be on investors’ minds.

It’s also interesting to note that Tech—which was left out of reopening exuberance in late February and early March as higher bond yields had investors worried about the possible impact on growth company earnings—also joined the parade Monday. The NASDAQ Composite is still well below its mid-February highs, but is up 7% from the March 3 low. That’s a pretty hefty advance in just eight trading sessions. Tech shares didn’t lead the way Monday, but a couple of big names like Apple (NASDAQ:AAPL) and Advanced Micro Devices (NASDAQ:AMD) have started to emerge from the doldrums over the last week or so.

Chip stocks Broadcom (NASDAQ:AVGO) and Nvidia (NASDAQ:NVDA) were among the leading Tech performers to start the week, indicating more life in that sector of Tech. The chip sector’s weakness earlier this month raised some eyebrows. That’s because semiconductor stocks are often thought of as the “cyclicals” of Tech, meaning they tend to do well when the economy starts improving from a recession and businesses that rely on chips start seeing more demand.

Energy was the odd man out Monday after being a leading sector most of the year to date. It could be a sign of some profit taking as the end of the quarter approaches. We’re getting to that time of the quarter when there’s sometimes a “window-dressing” type of trade going on where fund managers reel in some of the big winners of the quarter and throw back some of the losers. With that in mind, Energy and Financials could show continued life in coming weeks since they’re the top performers of Q1.

China/U.S. Talks This Week Could Put Trade Back On Menu

It seems like another era, but just two years ago the biggest story on Wall Street was U.S. trade relations with China. The pandemic and last year’s election steered the narrative away, and in the meantime their relationship hasn’t evolved much since the “Phase One” trade agreement signed in early 2020.

This week, Secretary of State Antony Blinken and national security adviser Jake Sullivan will meet their Chinese counterparts in the first high-level encounter since President Joe Biden took office, media reports said. Could trade be a topic? Well, if it’s any hint, a State Department spokesman told reporters that the talks will include “issues we disagree with.”

Agricultural trade between the countries is actually thriving. U.S. agricultural exports to China in 2020 rose to 55.5 million tons and comprised 25% of all farm shipments, according to the U.S. Agriculture Department. China is now buying more farm goods than it did before the trade war, and U.S. agricultural officials expect Chinese demand to grow, The Wall Street Journal reported.

That’s great for companies that process and supply agricultural goods, including Archer Daniels Midland (NYSE:ADM) and Bunge (NYSE:BG), among others. Shares of both have surged. U.S. farmers are expected to plant record acreage of soybeans and corn this spring, responding to higher crop prices driven partly by demand from China to feed its huge hog herd. More on China trade tomorrow. 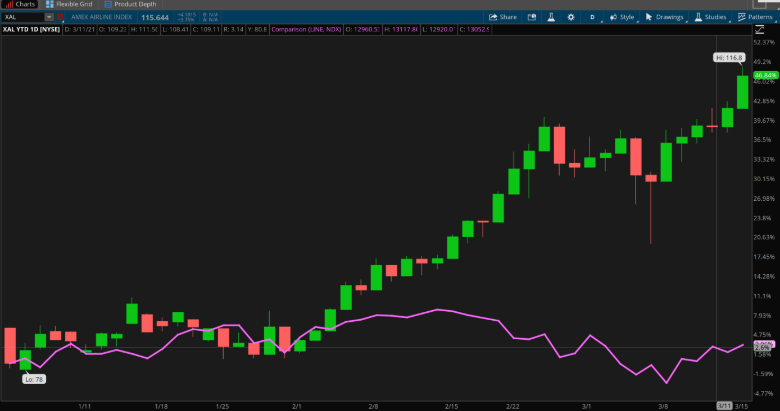 CHART OF THE DAY: REOPENING TRADE TAKES OFF—LITERALLY. This year-to-date chart of the NYSE Arca Airline Index (XAL—candlestick) vs. the Nasdaq 100 (NDX) shows just how much the market’s changed in 2021 vs. 2020. Last year, airlines were down and out as investors flocked to “stay at home” Tech stocks during the first waves of the pandemic. Thus year, it’s the opposite. Data Sources: NYSE, Nasdaq. Chart source: The thinkorswim® platform. For illustrative purposes only. Past performance does not guarantee future results.

Plotting Those Dots: Back in December, the FOMC’s rate projection graph (aka “dot-plot”) showed officials expecting no change in policy for all of this year and borrowing costs near zero through 2023, based on median estimates. Only one official predicted a rate hike as early as 2022, and only five predicted rate hikes by 2023. Investors might want to keep a close eye tomorrow on the new dot-plot to see if this long run of strong economic data and a falling bond market has anyone at the Fed rethinking those dovish estimates. If enough dots start rising above zero as early as 2022, (or less likely, 2021), it might get the stock market a bit nervous.

Going into the meeting, the Fed funds futures market puts chances of a rate hike by the end of this year at around 10%, up from zero a few months ago. So evidently some investors see chances the Fed might be forced to move as the economy continues gathering strength. Goldman Sachs (NYSE:GS) forecasts 8% gross domestic product (GDP) growth this year, the best most of us have ever seen in our lifetimes (the last time it was above that was 1951). At the same time, GS doesn’t build much inflation into its estimate, putting core inflation growth by 2023 at 2.1%.

All Aboard! Travelers (NYSE:TRV) appear to be getting more comfortable in the middle seat. Transportation Safety Administration (TSA) screenings are up 27% from three weeks ago, topping one million on eight of the 11 days through Sunday. That was just one less than the total number of one-million passenger days for all of January and February, according to the TSA database. If it keeps the current pace, travel could reach the point where it’s soon going to lap year-ago numbers from the first wave of the pandemic. Still, the latest 1.3 million TSA checkpoint figure for March 14, is down from nearly 2.3 million on the same date in 2019.

It’s not just airlines seeing more people. Anecdotal evidence suggests spring breakers and St. Patrick’s Day revelers are also out having fun, much to the chagrin of national health experts, who warn that we’re far from out of the woods despite the pace of vaccinations. Let’s hope people continue to take some caution even as they start enjoying themselves more than they could a year ago at this time.

Pax Britannica? The U.S. dollar has been clawing higher lately thanks in part to strong U.S. economic data and reopening progress. However, the greenback may be getting some competition, which could be good news for investors worried that a stronger dollar could slow sales for the multinational U.S. companies that depend on export markets. While it’s gone a little under the radar thanks in part to all the attention on U.S. elections and the pandemic over the last year, the British pound is really gaining some strength. It recently hit its highest level against the dollar since early 2018, and hasn’t budged much off of that peak. The pound might get another boost from comments yesterday by Andrew Bailey, governor of the Bank of England, who said the UK economy will recover to its pre-pandemic level by the end of this year as restrictions are lifted.

While the European Central Bank said last week it plans to boost bond purchases to give the flagging economy there more traction, a UK recovery—if it happens—would be a nice ray of sunshine for U.S. firms with markets there. The top U.S. export categories to the mother country in 2019 (the last year with complete data) were: Precious metal and stone (gold) ($14 billion), aircraft ($10 billion), mineral fuels ($7.4 billion), machinery ($6.2 billion), and electrical machinery ($4.6 billion), according to the U.S. Trade Representative. Also, more than 1.25 million Americans work for British companies in the U.S., the U.S. Chamber of Commerce notes.