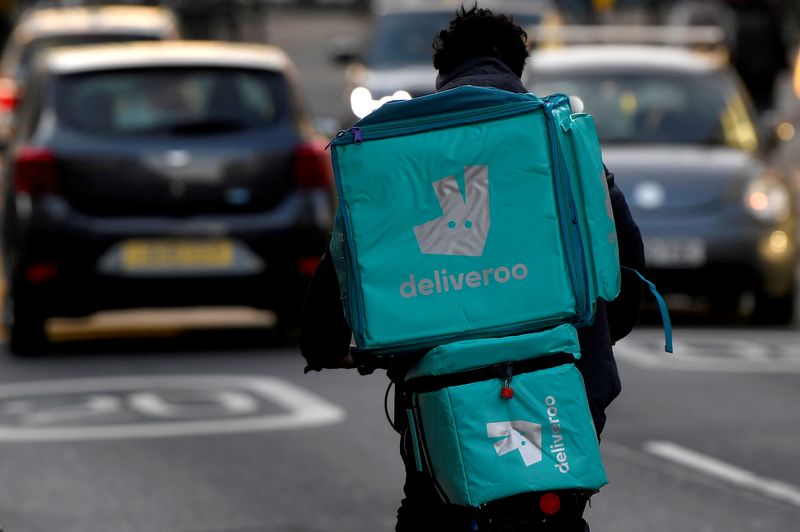 By Abhinav Ramnarayan and Julien Ponthus

LONDON (Reuters) – Shares in Deliveroo plunged by as much as 30% in their trading debut on Wednesday, slicing more than 2 billion pounds off the company's valuation in a blow to Britain's ambitions to attract fast-growing tech companies to the London market.

The highly-anticipated listing, the biggest on the London market in a decade, had been hailed by finance minister Rishi Sunak as a "true British tech success story" that could clear the way for more initial public offerings (IPO) by technology companies.

But the debut had already been overshadowed as some of Britain's biggest investment companies shunned the listing, citing concerns about gig-economy working conditions and the share structure.

Deliveroo founder Will Shu is retaining his 6.3% stake, but will have 57.5% of the voting rights of the company for three years; a structure that meant the company could not obtain a premium listing that gives companies access to the main FTSE indices.

The 390 pence price tag gave an overall valuation of 7.6 billion pounds ($10.46 billion) at the bottom of a target range.

Within minutes of the market opening on Wednesday, it lost 2.28 billion pounds of its value, which equity capital markets bankers said could undermine the market for some IPOs in Britain and Europe.

"Investors are turning away from the work-at-home play and putting their money into the economic recovery play. Deliveroo got caught in the middle of a huge rotation. It was the last IPO of the old COVID world," he said.

Having hit a low of 271 pence, the stock recovered slightly to close the day at 287.45 pence. It was still down 26.3%, making it the worst first-day performance for a sizeable London IPO – above 1 billion pounds – on record, markets platform Dealogic said.

Shares often rebound during their market debuts as the managing banks make use of the over-allotment, or greenshoe – a percentage of the offer reserved to stabilise the price.

Deliveroo customers, who were allocated 50 million pounds of shares, are only able to trade on April 7, when unconditional trading begins.

The stock's fall follows a poor run for many growth stocks. Its main peers Just Eat Takeaway.com and Delivery Hero have fallen around 12% each in the past month.

U.S. peer Doordash – which doubled in value on its stock market debut last year – has fallen as much as 40% over the last month.

But those stocks have steadied in the last two sessions, and the Amsterdam stock exchange hit a record high on Wednesday, led by tech stocks.

Deliveroo's self-employed drivers have seen a boom in demand during the pandemic, bringing food from otherwise-shuttered restaurants to house-bound customers.

Irrespective of profitability, there has been a clamour for growth companies over the last year as the COVID-19 crisis has pushed interest rates and government bond yields to all-time lows.

But with U.S. Treasury yields rising, this trade has lost allure and many tech stocks on both sides of the Atlantic have fallen in recent weeks, leading to questions over inflated valuations.

"That comes back to the issue that how could a company that was valued at 3 billion (pounds) in November, 5 billion in January, be magically worth 8-9 billion in March – particularly when, according to its own statements, it was potentially in need of emergency funding last year," Russ Mould, Investment Director at AJ Bell, said.

The listing of the London-based company, founded in 2013, is London's biggest IPO since Glencore (OTC:GLNCY)'s in May 2011 and also the biggest tech float yet on the London Stock Exchange.

"The number of institutions lining up to say no on ESG (environmental, social and corporate governance) grounds always looked like it was going to make it a tricky debut," said James Athey, investment director at Aberdeen Standard Investments.

Goldman Sachs (NYSE:GS) and JP Morgan are leading the deal, while Bank of America (NYSE:BAC), Citi, Jefferies (NYSE:JEF) and Numis are also part of the syndicate of banks managing the transaction.