For pure drama this past year, it was hard to beat the performances of global financial markets. Except possibly via the U.S. presidential election and its aftermath. 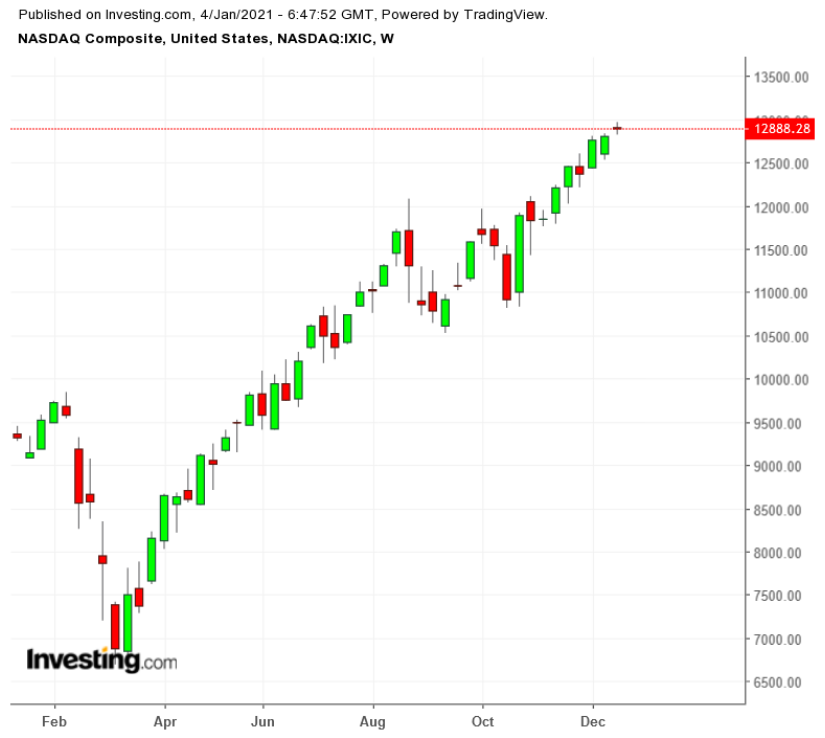 However, to get these 2020 results, markets had to weather another trauma: the COVID-19 pandemic, which has infected millions and caused more than 350,000 deaths across the U.S. and at least 1.8 million deaths around the world, then claw their way higher. A concern is that froth in the stock market as 2020 opened hasn't gone away.

There is hope that the development of new vaccines to fight the virus will reduce caseloads and deaths and boost economies around the world. But 2020's stresses, including from the U.S. Presidential election, may find some investors exhausted.

As the pandemic first emerged from Asia in the winter of 2020, governments locked down whole populations, especially in Europe and parts of the United States.

Oil prices cratered. West Texas Intermediate, the U.S. benchmark, fell under $20 a barrel for the first time in years and even went negative for a day in April. WTI did not cross $40 again until July. While prices rose nearly 27% in November and 7% in December, its $48.52 close on Friday was still off 21% for the year.

Because of the economic panic, Federal Reserve and central banks around the world cut interest rates and tried to boost available credit. Governments, with middling result, hurriedly tried to enact stimulus packages.

The Fed may not boost its key rates until 2022 or later because of the overall weakness in the U.S. economy. The November unemployment rate was 6.7%; the first report on December is due Friday. Jobless claims totaled 787,000 in the week of Dec. 20 after reaching nearly 7 million in March. However, before the pandemic erupted, jobless claims were running at about 200,000 a week.

Lots Of Opportunity, Plenty Of Losses Too

The pandemic, however, created lots of opportunity for companies targeting customers not affected by layoffs. These include:

1. Developers of coronavirus vaccines. It's the small companies whose shares emerged as winners. Pfizer (NYSE:PFE) finished the year up just 6%. AstraZeneca (NASDAQ:AZN), the British pharma giant, was up 0.3%.

The reason for the dichotomy is that Big Pharma has a ton of drugs in the market and more in the pipeline, but pricing power doesn't attach for their drugs. But U.S. shares of BioNTech (NASDAQ:BNTX) Pfizer's German partner in the development of the vaccine, jumped 140%.

Moderna (NASDAQ:MRNA), the biotech whose own vaccine has won U.S. approval, surged 434%. 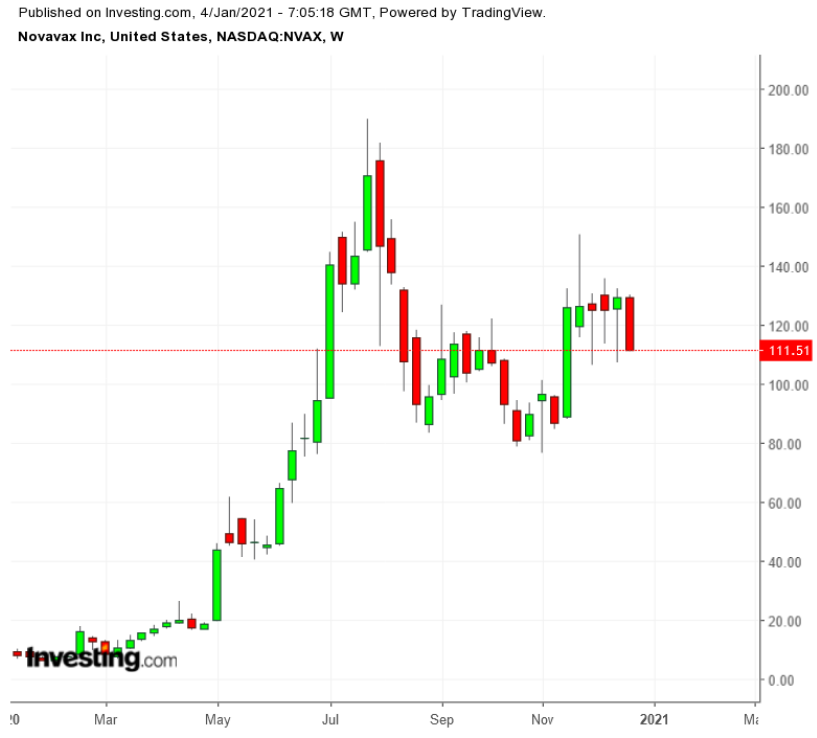 2. Tesla. Tesla (NASDAQ:TSLA) was in a world by itself. Shares of the electric vehicle maker finished the year up 743%, tops in both the NASDAQ 100 index and the S&P 500 index.

Elon Musk's company delivered nearly 500,000 new vehicles to customers in 2020. Profitability appears to be stable, and Tesla was rewarded with membership in the S&P 500 in December. It has a market cap of $669 billion, nearly twice as large as Toyota (NYSE:TM), Honda (NYSE:HMC), General Motors (NYSE:GM) and Ford (NYSE:F) combined. That included gains of 24% in December and 46% in the fourth quarter alone. It appears to be a must-have stock, even if it is selling at 1,398 times trailing 12-month earnings.

3. Online retailing stocks. These stocks took off. Many shoppers, trying to avoid exposure to the virus, ordered online. Amazon.com (NASDAQ:AMZN) has said it expects fourth-quarter sales of $112 billion to $124 billion. Target (NYSE:TGT) and Walmart (NYSE:WMT) have also reported higher online sales in the summer and fall. 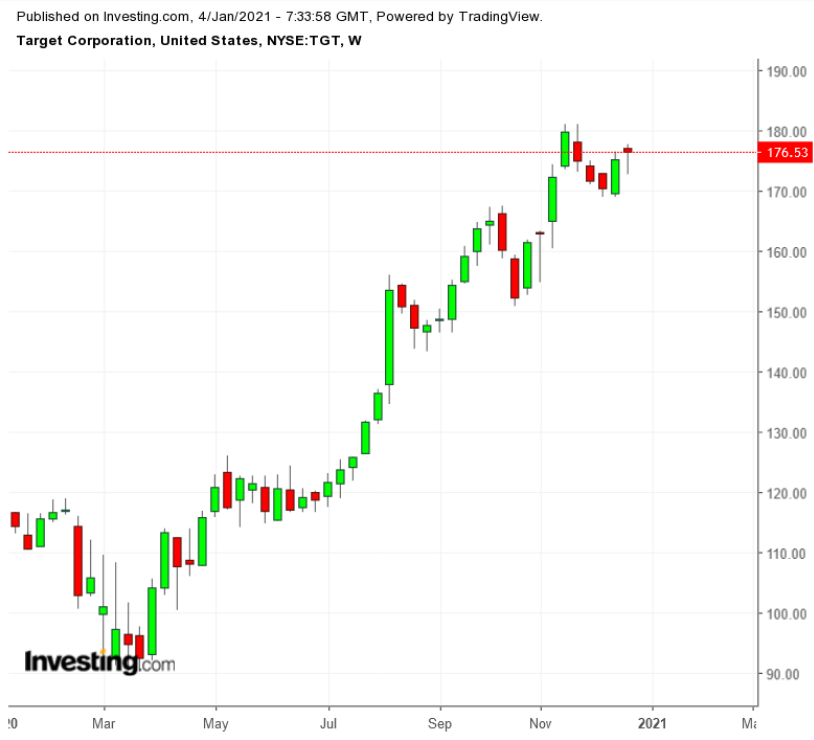 5. Online service companies. Etsy (NASDAQ:ETSY), the online marketplace targeting crafters, was up 300%, in part because it joined the S&P 500 in September. DoorDash (NYSE:DASH), which provides food-delivery services, went public on Dec. 8 at $102 and hit $195 in its first day of trading. The shares have pulled back but appear to have stabilized above $140, up about 40%.

Airbnb (NASDAQ:ABNB), which operates a vacation online marketplace, went public on Dec. 10 at $68, indicating a market value of $100 billion. The shares jumped to nearly $175 but have pulled back to $146.80 on Friday, up 116% in its first month of trading. Online real-estate brokerage Zillow (NASDAQ:ZG) rose 47%.

6. Traditional big tech. Apple (NASDAQ:AAPL) rose 81% because investors like its prospects with 5G phones. Its profit stability add safety to the downside risk. The stock has acted as a safe haven in the pandemic. Advanced Micro Devices (NASDAQ:AMD) basically doubled. Graphics chip maker Nvidia (NASDAQ:NVDA) rose nearly 122%. Amazon finished up 76% and Microsoft (NASDAQ:MSFT) was up 41%.

7. Metals stocks. These have been rising as hopes have built that the emergence of effective vaccines for COVID-19 will lead to a strong global economic rebound. 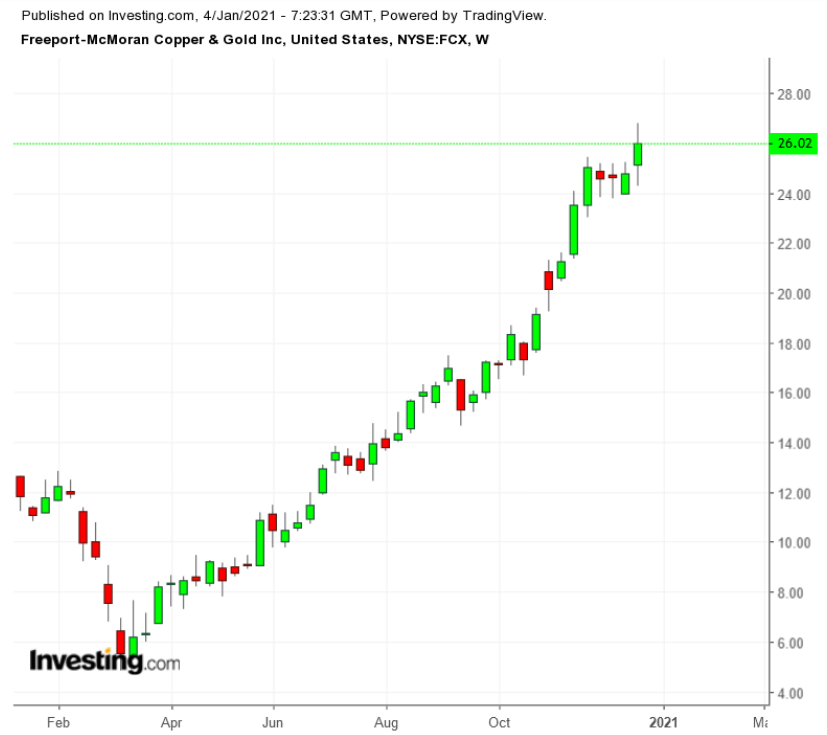 Gold, the classic safe-haven investment, jumped 24% to $1895.10 an ounce. Silver was up 47%. Aluminum maker Alcoa (NYSE:AA) fell 71% in the first quarter because of the virus but has recovered all those losses. While it ended the year up 7.2%. It was up 98% in the fourth quarter.

Among the losers remain companies directly smashed by the corona virus. These include:

1. Energy companies, especially oil & gas producers. These finished the year substantially lower, although the rebound in oil prices in the latter half of the year did boost the stocks. 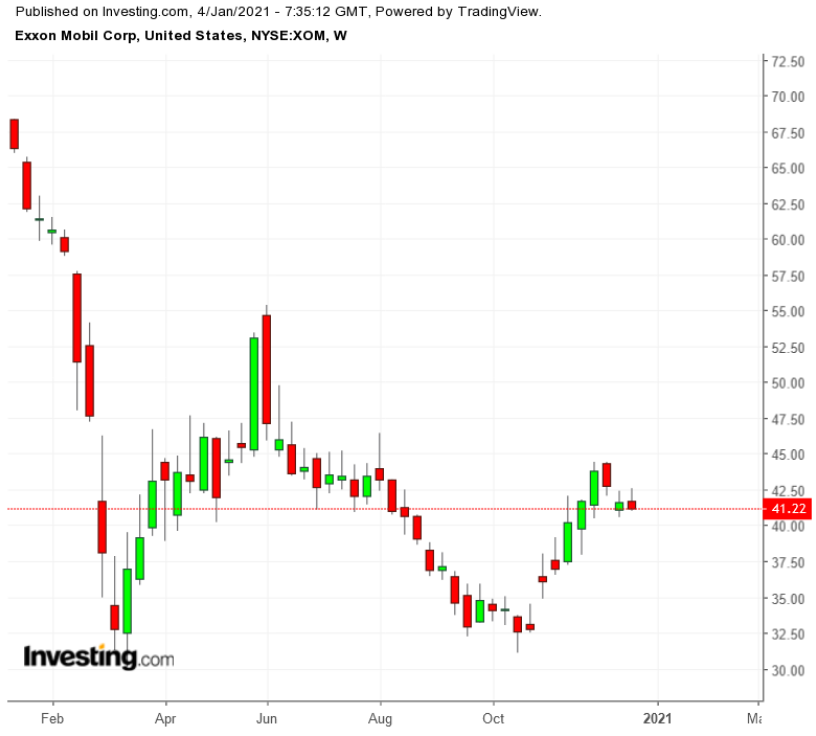 Exxon Mobil (NYSE:XOM) fell 46% in the first quarter. It also suffered the humiliation of being removed from the Dow after 82 years. But it did rise 41% in the fourth quarter.

Occidental Petroleum (NYSE:OXY) slumped 58% for the year. But with oil prices moving higher, the shares were up nearly 10% for December and 73% for the fourth quarter.

2. Airlines. Airline shares have been pummeled by the pandemic as well as the fallout from the problems with Boeing's (NYSE:BA) 737 MAX because people won't travel if they don't have to.

Even if the economy puts in a strong recovery and vacation travel picks up, business travel is likely to be slow in recovering because face-to-face meetings can be held on Zoom or Microsoft Teams. But some carriers, notably Alaska Airlines (NYSE:ALK) and Ryanair Holdings (NASDAQ:RYAAY), have put in new orders for the 737 MAX planes, now that regulators have recertified the aircraft.

Their hope: people cannot wait to travel again. Alaska shares saw modest gains in December but shot up 41% in the fourth quarter as investors increased their bets for a recovery.

3. Boeing. The aerospace giant has seen its order book collapse. As the year closed, there were hundreds of 737 MAX planes parked on tarmacs all over the U.S. West awaiting the plane's recertification.

Assuming people get COVID-19 and flu shots, life may start to look more like what it was pre-pandemic. Which means more consumer spending, better jobs numbers and continued strength in residential real estate markets in the United States and elsewhere.

The Federal Reserve does not want to raise interest rates any time soon. Probably not before 2022.

All this is good for stocks.

A big risk is that the bond market may push interest rates higher anyway because of gargantuan amounts of debt governments have had to take on to fight the virus. Watch the 10-year Treasury yield. It has been inching back toward 1% because investors are beginning to move money out of the United States into other markets.

That also pushed the dollar lower, which means import prices may start to rise, adding inflationary pressures to the economy. The U.S. Dollar Index, which tracks the dollar against a basket of currencies, fell 6.4% in 2020 overall but 12.7% after peaking in March.

As well, one must keep an eye out for markets getting pricey. The relative strength index for the NASDAQ is currently above 70, a warning that stocks could be getting overheated. Not far behind, the levels for the Dow, S&P 500 and the NASDAQ100 were all just below 70 on Friday.