Monday's higher stock prices don't mean that the sky is the limit now. There were quite a few signs of weakness in related markets. The put/call ratio moved lower again, and so did VIX. But it's the market internals that are the giveaway sign – technology has been the predictable upswing driver, reflecting my thoughts yesterday on the rising yields pressure:

(…) One daily move doesn't make a trend change likely though, especially since the March pace of TLT decline is on par with February's and higher than in January's. While Treasuries paused in early March, they're now once again as extended versus their 50-day moving average as before.

And that poses a challenge for interest rate sensitive stocks and, to some degree, for tech. While I expect value to continue to lead over growth, technology would recover some of the lost ground on rates stabilization. And it‘s true that the United States 10-year yield move has been a very sharp one, more than tripling from the August 2020 lows.

We got that reprieve yesterday, and tech jumped on board enthusiastically, while other usual beneficiaries didn't . Utilities didn't move, but at least consumer staples swung higher. Coupled with the value stocks mostly treading water yesterday, it makes for a weak daily market breadth.

The key events today and tomorrow are the Congress testimonies. While Powell is set to downplay inflation, inflation expectations and still overall elevated/rising long-dated Treasury yields, it's my view that the market is again squaring the bets, best seen in the commodities lately. But I look for the Fed to project the same messaging it did on Wednesday, and perhaps double down on it.

I don't view the market as in danger of a deflationary collapse, not when the stimulus avalanche is hitting, and the Fed is reluctant to change course. I am not looking for them to telegraphs such a turn today or in the weeks to come, and that would mean recovery in the commodity prices.

Gold is an island of relative, temporary peace, but the miners are weakening – both gold and silver. Darkening clouds here regardless of the support the copper to 10-year Treasury yields can offer. Still, the yellow metal has decoupled from rising nominal yields to a remarkable degree lately.

(…) As gold is arguably the first asset to move in advance of a key policy move, it might be sensing the Fed being forced (i.e. the markets betting against the Fed) to moderate its accommodative policy. Twist, taper – there are many ways short of raising the Fed funds rate that would help put pressure off the sliding long-dated Treasuries, not that these wouldn't be susceptible to move higher from oversold levels. And just like the yellow metal front-runned the Fed before the repo crisis of autumn 2019, we might be seeing the same dynamic today as well.

Let‘s move right into the charts (all courtesy of www.stockcharts.com). 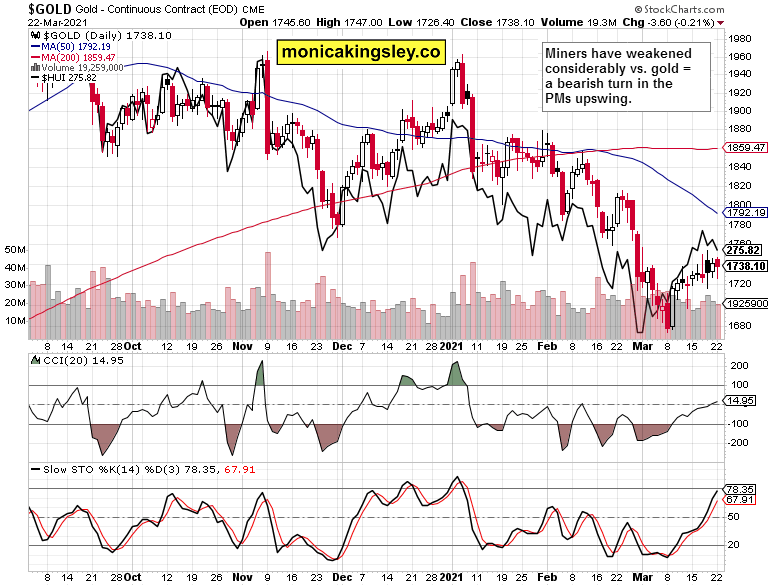 Similarly to March 12, the precious metals upswing is being challenged. Miners (VanEck Vectors Gold Miners ETF (NYSE:GDX) ETF) are underperforming. Today's session will tell whether we're witnessing consolidation, or a renewed rollover to the downside, the chances of which have risen yesterday. 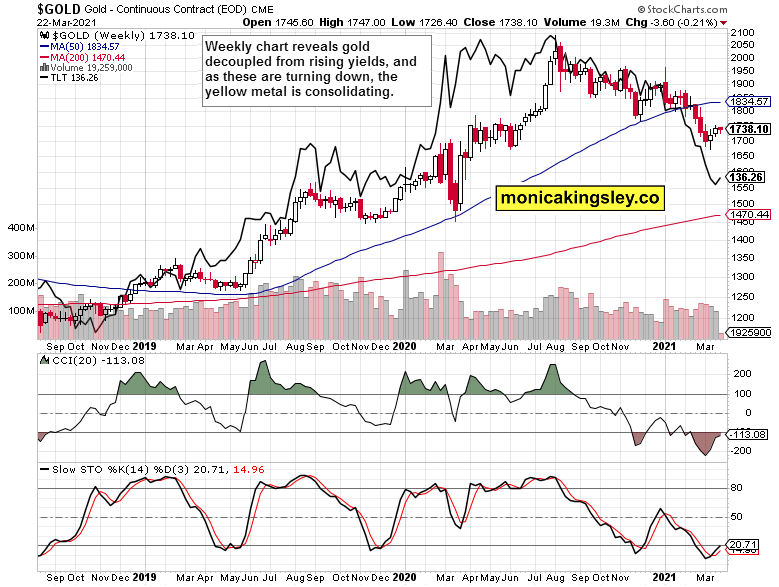 The weekly view remains positive. The pace of gold's decline became less sensitive to nominal yields move, turning higher before these did, and currently not making much headway. Still, that's arguably the clearest sign of the turning tide in the gold market.

Silver is getting under pressure on rising volume, and its miners are declining too, highlighting increasing risks to the white metal. Disregarding today's premarket action, that alone makes it worthwhile to dial back (take profits off the table) in the long silver short gold spread I introduced you to on Feb. 12. It's that the degree of momentary commodities underperformance looks like taking a meaningful toll on the white metal (and that concerns oil as well, which would turn short-term bearish with a breakdown below $57 to $57.50 on a closing basis and on high volume without a prominent lower knot.

Gold and, for that matter, silver bulls have to prove shortly that the upswing isn't taking more than a pause – that is, that it isn't rolling over. The signals from the commodities space aren't encouraging, and platinum trading isn't helping to clarify the outlook for today's session either.