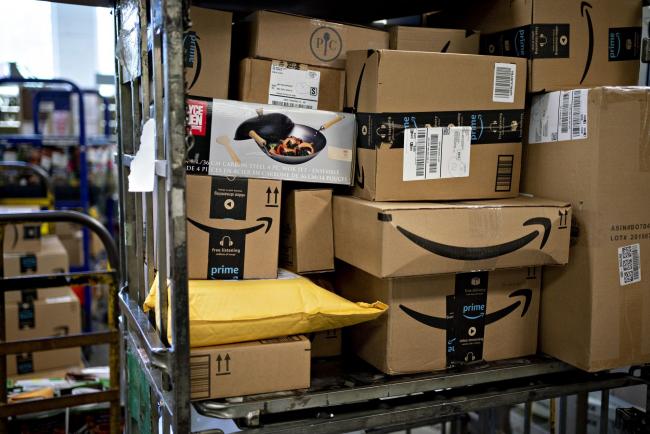 © Bloomberg. Amazon.com Inc. boxes sit at a United States Postal Service (USPS) facility in Fairfax, Virginia, U.S., on Tuesday, May 19, 2020. The Postal Service in recent weeks has sought bids from consulting firms to reassess what the agency charges companies such as Amazon, UPS and FedEx to deliver products on their behalf between a post office and a customer's home, the Washington Post reported last week. Photographer: Andrew Harrer/Bloomberg

“Cyber Monday continued to dominate the holiday shopping season, becoming the biggest online shopping day in U.S. history, despite early discounts from retailers,” Taylor Schreiner, director of Adobe Digital Insights, said in a statement. “Throughout the remainder of the holiday season, we expect to see record sales continue and curbside pickup to gain even more momentum as shoppers avoid crowds and potential shipping delays.”

The pandemic-fueled stampede online was a valuable opportunity for retailers such as Amazon.com Inc (NASDAQ:AMZN)., Walmart (NYSE:WMT) Inc., Target Corp. (NYSE:TGT), Best Buy Co (NYSE:BBY)., which had been preparing for the 2020 holiday deluge for months. There were occasional hiccups, but the industry’s investments in delivery capacity and parking lot pickup helped get it through the Thanksgiving weekend and Cyber Monday.

Black Friday spending of $9 billion also missed Adobe’s forecast of $10.3 billion, another sign of cautious consumer spending during the pandemic and shoppers reacting to deals earlier in the holiday season. Amazon vacuumed up $1 in every $5 spent over the Black Friday weekend, the first time the Seattle-based giant accounted for the highest share of spending for the period, according to market research firm Numerator.

But Cyber Monday will likely still be the peak, because many shoppers are conditioned to hold off on big purchases in anticipation of price cuts.

Cyber Monday deals mostly weren’t much better than Black Friday deals, said Kristin McGrath, editor at BlackFriday.com, which monitors web deals. Harkening back to traditional door-buster Black Friday tactics, many digital shops are likely to offer eye-popping discounts on popular products that usually sell out quickly to attract people to their site, hoping they linger and load up shopping carts with other things.