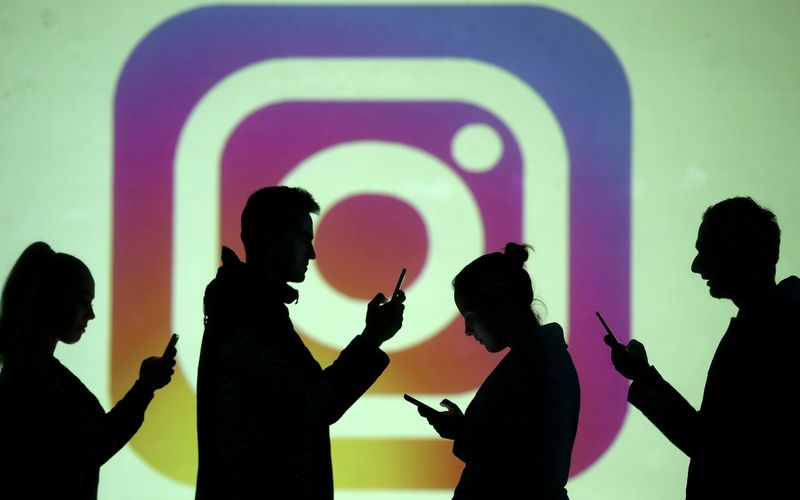 © Reuters. FILE PHOTO: Silhouettes of mobile users are seen next to a screen projection of Instagram logo in this picture illustration taken March 28, 2018. REUTERS/Dado Ruvic/Illustration/File Photo

BRUSSELS (Reuters) -The European Commission on Friday defined the scope of revised copyright rules adopted last year following criticism from governments, including France and Poland, but EU broadcasters and internet activists said there was a danger of censorship.

The revamped copyright directive, the first overhaul in two decades, aimed to provide fair compensation for the bloc’s $1 trillion creative industry and its 11.7 million employees.

A central provision, Article 17, backed by the creative industry, would force Google-owned YouTube, Facebook (NASDAQ:)’s Instagram and other sharing platforms to install filters to prevent users from uploading copyrighted materials.

It triggered a fierce lobbying battle, pitting artists and news publishers against tech companies, internet activists and consumer groups, with France saying the Commission’s stance could weaken Article 17, while Poland is challenging it through the European courts.

The platforms can be sued for making copyright-infringing content available to the public, even when it has been uploaded by their users. Critics say filters are costly and could lead to erroneous blocking.

EU countries have until June 7 to transpose the directive into national law.

The Commission in its policy paper published on Friday said Article 17 would only apply to online service providers and online audio and video streaming service providers that make money from copyrighted work uploaded to their platforms by their users.

Companies may also escape liability if they can show they have done their best to obtain authorisation for copyrighted works on their platforms and acted speedily to remove content when notified.

To mollify internet activists, the Commission said Article 17 should not apply to caricature, parody, criticism, review and quotation.

It said automated blocking of content should be limited to manifestly infringing uploads and EU countries should provide a complaint and redress mechanism to service providers so that their users can use it in the event of disputes.

“This sets a dangerous precedent for future European legislation and for other governments around the world that would get inspired by legalised copyright censorship in Europe,” its head of policy Diego Naranjo said.

The Association of Commercial Television in Europe was also critical and predicted the guidance would be ignored.

“This very last minute non-binding guidance is manifestly contentious and very likely to be challenged,” ACT Director-General Gregoire Polad said in a statement.