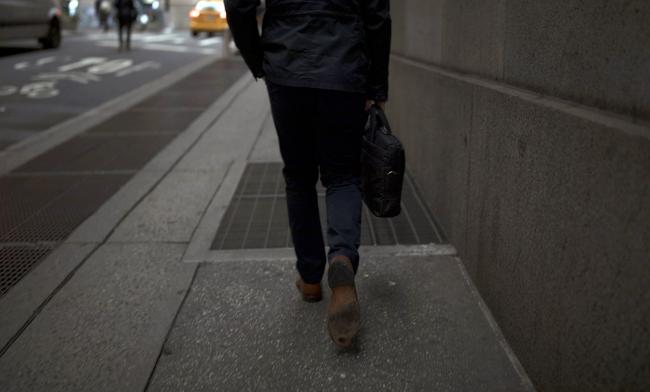 © Bloomberg. A pedestrian walks along a street near the New York Stock Exchange. Photographer: Jordan Sirek/Bloomberg

(Bloomberg) — Credit traders may be the luckiest lot on Wall Street as banks set bonuses after a banner year for trading.

Desk jockeys who make their living matching buyers with sellers of company bonds are poised for a 16% jump in total compensation, on average, the biggest gain among Wall Street trading desks, according to a compensation report from recruiting firm Options Group. Managing directors in credit trading will typically pull in over $1 million in 2020, said the firm’s chief executive officer, Michael Karp.

“Expectations of people in the credit business are quite high,” Karp said in an interview, a hint that not everyone will be happy with what they get. “Credit was obviously the outperformer in fixed-income products.”

Predicting individual awards for traders is a bit tougher this year after banks saw their performance diverge in 2020’s wild markets and as industry leaders weigh how much to lavish on well-paid staff amid a pandemic that’s left millions unemployed and taken a toll on businesses such as lending. Odds are that — averages aside — pockets of traders won’t get what they think they deserve for boosting revenue to the highest levels in years.

“In a pandemic and with regulators and politicians and everybody, it makes it complicated,” said Alan Johnson, founder of compensation consultant Johnson Associates. He broadly predicts the biggest bonus increases will go to fixed-income desks, which includes credit trading. But generally, “traders will probably be disappointed.”

Desks focused on a variety of markets benefited as prices plunged in response to the pandemic, but then rebounded, setting off surges in client activity that generated billions of dollars in additional revenue. That left the five biggest U.S. investment banks on pace for their first $100 billion year for trading revenue in more than a decade.

Options Group predicts rates traders will see the second-highest gain, with a 14% increase in total compensation this year. That compares with a 9% jump for fixed-income traders more broadly and a 7% increase for their counterparts on equities desks.

Credit desks benefited in particular from the Federal Reserve’s low rates and unprecedented efforts to support corporate-debt markets. With investor activity expected to remain strong, banks will probably beef up their credit desks over the next 12 to 18 months, consulting firm McKinsey & Co. said in a report last month.

Even so, payouts probably won’t keep pace with rising revenue as firms focus on costs ahead of an uncertain 2021, including an expected surge in loan defaults. JPMorgan Chase & Co. (NYSE:JPM), for example, may increase traders’ annual bonuses 15% to 20% — far short of the 48% surge in revenue in the firm’s markets businesses in the first three quarters. At Bank of America Corp (NYSE:BAC)., where the jump in trading revenue wasn’t as strong, senior executives are floating plans to keep the bonus pool for sales and trading flat with 2019.

“Even though the trading revenue growth was incredible, it won’t correlate to a similar jump in bonus,” Karp said. “Banks are not making their compensation decisions based on one spectacular year.”