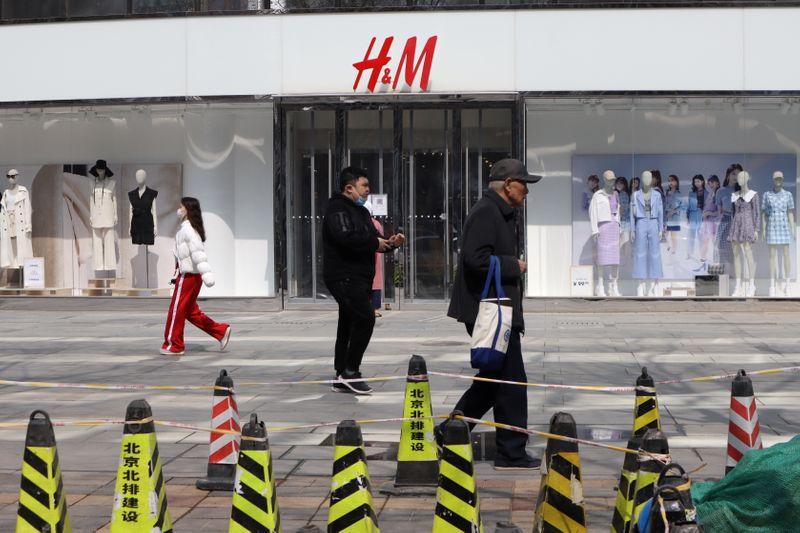 © Reuters. People walk past an H&M store at a shopping complex in Beijing

STOCKHOLM (Reuters) – Chinese authorities have asked H&M to change a map on its website in the latest clash between the clothing giant and officialdom there, media reported on Friday.

The company, based in Sweden, has faced a backlash in China in recent days after it voiced concerns last year about alleged human rights abuses in Xinjiang province.

ABC News reported that the city government of Shanghai had asked H&M to correct a ‘problematic map of China’.

H&M did not immediately respond to telephone calls or an emailed request for a comment.

Citing a statement by the Shanghai government, ABC said Internet users reported the problem to the management of H&M’s website and the Shanghai municipal bureau of planning and natural resources ordered it to be changed.

The Wall Street Journal cited the Shanghai arm of the Cyberspace Administration of China as saying that H&M’s website operator had taken actions to address the issue.

Last week, H&M said it would work to win back trust in China after a statement it had made in 2020 about sourcing cotton there resurfaced on social media.

In the statement, the world’s second-biggest fashion retailer expressed concern about the allegations of forced labour in Xinjiang province and said it would no longer source cotton from there.

There’s no such thing...

3 Dogs Of The Dow To Buy Now