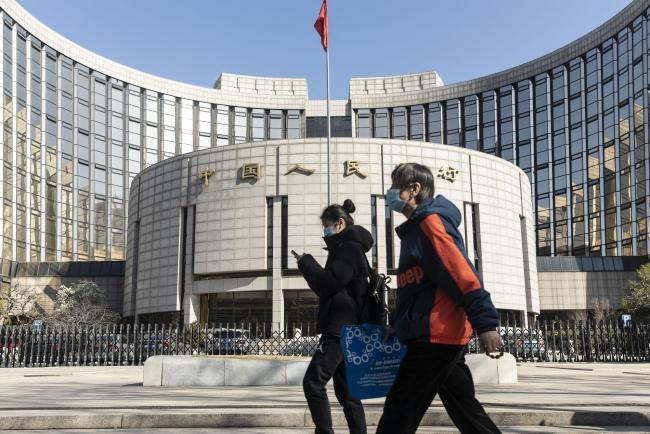 © Bloomberg. Pedestrians wearing protective masks walk past the People's Bank of China (PBOC) building in Beijing, China, on Tuesday, March 17, 2020. China suffered an even deeper slump than analysts feared at the start of the year as the coronavirus shuttered factories, shops and restaurants across the nation, underscoring the fallout now facing the global economy as the virus spreads around the world. Photographer: Qilai Shen/Bloomberg

(Bloomberg) — China’s central bank reiterated its pledge to avoid a sudden shift in monetary policy while it maintains necessary support for the economy’s recovery.

The main priority is stability, the People’s Bank of China said in a statement late Tuesday after its quarterly policy meeting, vowing to “make no sharp turn” on policy. Monetary policy should be flexible, targeted, reasonable and appropriate, it said, reiterating comments from the Communist Party’s recent Central Economic Work Conference.

The PBOC has been signaling a gradual withdrawal of monetary stimulus as business activity returns to normal and debt levels soar. The recent statements from authorities suggest a “more moderate” stance compared with previous calls on stimulus exit, according to Huachuang Securities analysts, including Zhou Guannan.

The central bank said it will use various policy tools to keep liquidity reasonably ample and keep the growth of money supply and credit in line with nominal economic growth. The macro leverage ratio should also be kept stable, it said.

A key goal is to strike a balance between supporting the recovery and preventing financial risks, the PBOC said. The central bank will also deepen market-based reforms of the interest-rate and exchange-rate systems and guide financial institutions and other companies to stick with “risk-neutral” thinking, it said.