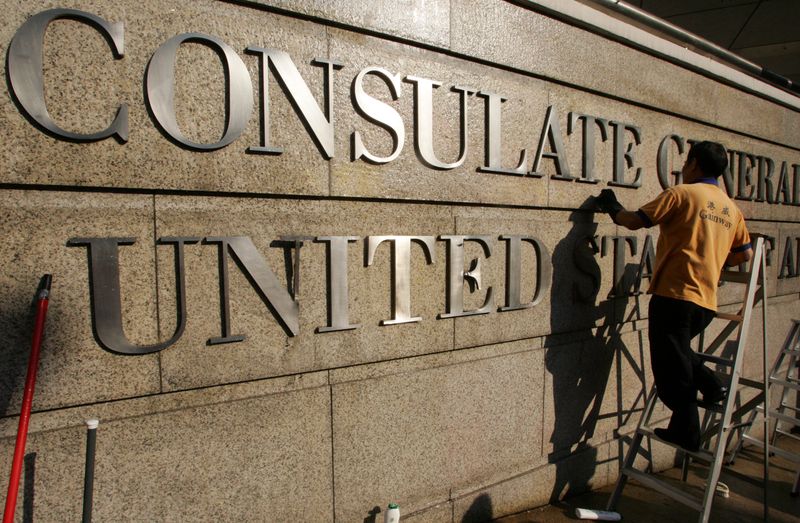 © Reuters. FILE PHOTO: A worker cleans the front wall of the US Consulate General in Hong Kong

HONG KONG (Reuters) – Hong Kong developer Hang Lung Properties said it was unable to complete the purchase of a property owned by the U.S. consulate as scheduled on Wednesday because it involved foreign affairs between China and the United States.

The latest twist in the $331.5 million deal in an upscale location in the financial hub comes amid growing tension between the world's two biggest economies over a host of issues.

The developer, which agreed in September to buy the property used to house U.S. consulate staff, said in a filing on Wednesday it received a letter from the Land Registry last week that the property is "not an ordinary real estate property".

"The matters as stated in the letter were exceptional and were not made known to or anticipated by (Hang Lung)," the developer said.

It said after informing the United States, the U.S. on Tuesday contested the necessity to comply with the diplomatic obligations and did not produce the evidence as demanded.

The group is currently evaluating and taking legal advice on the various appropriate actions, including exploring the feasibility of extending the time for deal completion.

A U.S. consulate spokesperson told Reuters additional time is needed for the buyer and seller to complete the administrative processes required for closing on the property, and the department is not at liberty to comment on the specific terms of ongoing contractual transactions.

During the tender of the property, property consultants said many developers in mainland China and Hong Kong were hesitant to venture an offer because it was seen as politically sensitive.

The former British colony returned to Chinese rule in 1997.