By just about any measure, Apple (NASDAQ:AAPL) made shareholders very happy in 2020.

The stock is up 83.5% as the year comes to a close. In addition, on Aug. 19, the iPhone maker crossed the $2 trillion market cap milestone, making it one of the most highly valued companies in the world.

Equally impressive, during a year when the coronavirus pandemic hammered the global economy, leaving large swathes of the consumer public unemployed, demand is up for the latest iteration of its iconic smartphone, which costs upward of $1,000.

Along with the stock's amazing rally, its forward price-to-earnings ratio ballooned to 33 times earnings, up from 22, making it, in our opinion, less of a bargain at this point. Furthermore, shares gained about 20% in the past month after Reuters reported there could be an Apple self-driving car by the end of 2024.

However, all the good news as well as user loyalty notwithstanding, Apple is also facing a variety of headwinds.

Long-time iPhone glass supplier Lens Technology (SZ:300433), based in China, has been accused of using forced labor to create iPhone screens. As well, Apple Pay could soon become the target of an antitrust lawsuit from the European Commission after the EC announced it was opening an investigation into the app in June. Should that occur it would be in addition to a suit just filed in California by a competitor in the US against the original App Store, for monopolistic practices. Apple has already been under scrutiny along with other big tech companies this year from US Congressional lawmakers.

Nevertheless, the stock hit a new record high on Monday, after an analyst call said it would outperform among mega caps in 2021. However, the fact the stock slumped more than the broader market yesterday, just one day after it led big tech shares higher, is a red flag in our book. 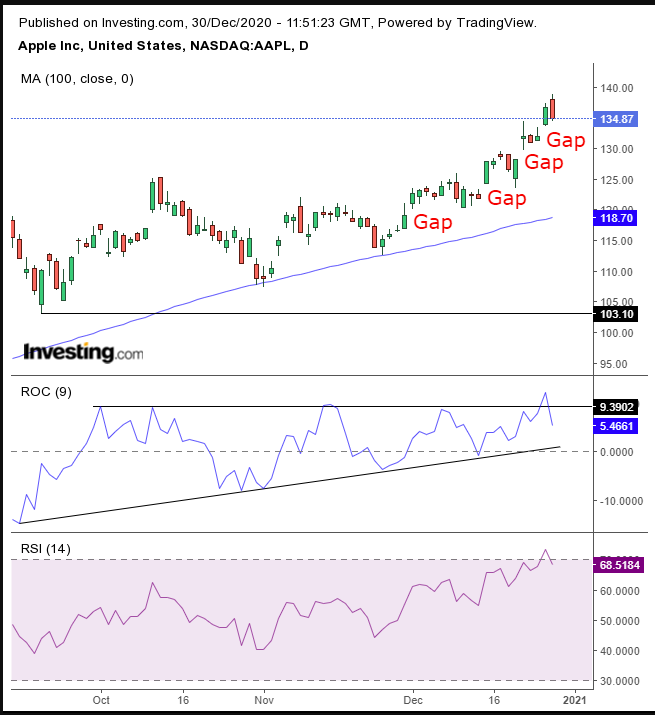 The expression “two steps forward, one step back,” characterizes the stock’s recent movement. It suggests a continued advance which isn't necessarily the case.

In Japanese technical analysis, an advance like that is akin to an army pressing forward only to ultimately retreat. Similarly for advances that end up with a loss.

Tuesday’s trading opened higher, only to slip much lower, deep into Monday’s candle. That produced a Bearish Engulfing pattern—a visual representation illustrating a bearish counterattack that rendered the attempted bullish advance a failure.

The fact that Monday also saw a rising gap sets up this bearish engulfing pattern to become an Island Reversal. Given this was the fourth gap in a row during December, further increases the odds an Exhaustion gap, the final flicker of a flame before its extinguished, as dumb money rushes in at the top of the market, duped by all the good news, that the smart money had already priced in.

The fact that all this occurs at this price level increases the odds yet more of a decline. 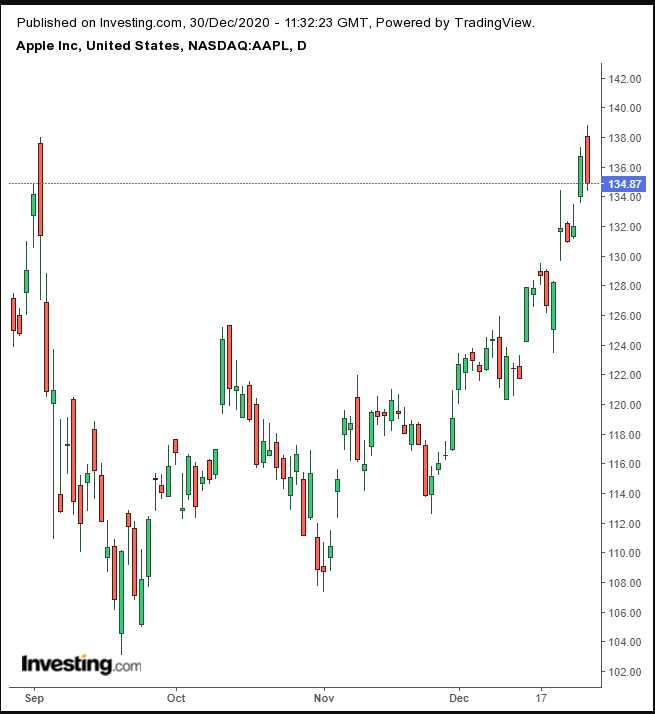 These bearish engulfing patterns have the make up for an Island Reversal following an Exhaustion gap which coincides with the previous all-time high, posted on Sept. 2. This provides all the ingredients for a potential double-top.

Note: the ROC found resistance by its depressed momentum, contrary to the price’s having added 18% from its October high, and has remained at the same level since then. The RSI dipped below 70 after reaching the overbought level of 73.6.

Conservative traders would wait for accumulation above the new heights, before going long, or for the double bottom completion, to short.

Moderate traders are likely to wait for support in order to buy the dip.

Aggressive traders will probably short right now, providing they understand and accept the risk of going against the trend.