Netflix’s position as the one true god of streaming services is being challenged, as competitors crowd the space.

Other players, like Walt Disney Company (NYSE:) and Amazon (NASDAQ:), have been encroaching on the once uncontested market Netflix (NASDAQ:) enjoyed, causing its market share to shrink to 20% from 29%.

Another difficulty facing the streaming giant is that all of its growth-eggs are in one basket—its streaming service. Whereas its competitors, Apple (NASDAQ:), Alphabet (NASDAQ:), Facebook (NASDAQ:) and Amazon (NASDAQ:) and even Microsoft (NASDAQ:)—which is also shoving its leg through the streaming door—all dominate other tech spaces giving them flexibility and additional avenues of expansion.

If that’s not enough, Netflix also has longstanding shareholder problems. Shareholders have been fighting to have better corporate governance at the company and have been dissatisfied for years at the board’s poor track record on implementing non-binding shareholder resolutions. But because of the company’s voting requirements it is difficult to make a change. If shareholders lose patience and start selling large swathes of shares, it could be detrimental to the price.

Finally, let’s remember that Netflix had its heyday during lockdown, when people were stuck at home. But after a year and a half of binge watching, people are excited to get back to life in the real world.

Perhaps, because of these three reasons, Netflix has the weakest chart among the FAANG stocks. 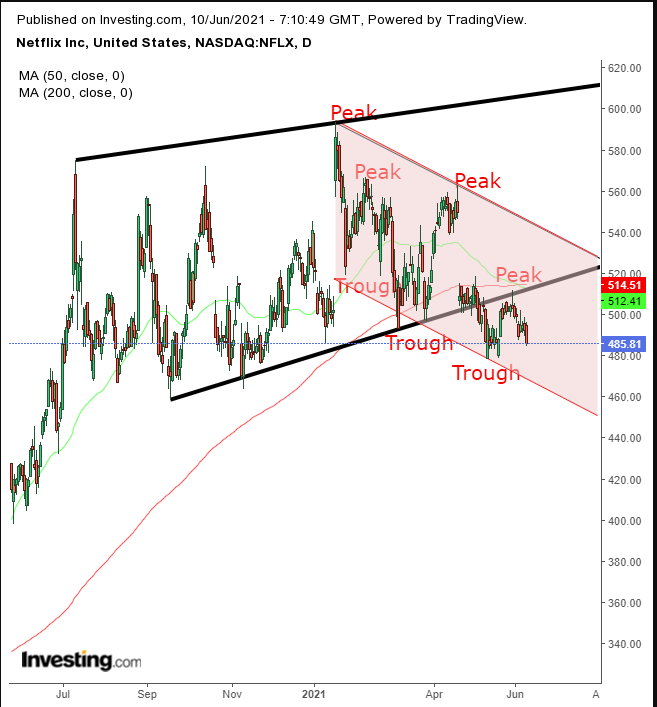 The stock has fallen out of its rising channel since July 2020. The price attempted to climb back into the channel but was smacked hard. After a meaningful advance, it fell, even below its opening price, forming a shooting star—particularly bearish considering it was rejected from the rising channel, as well as the 200 DMA, right before a Death Cross.

Now, the price is headed toward the bottom of a new, falling channel since the Jan. 20 peak record, which means there is always the potential of a corrective rally to retest the falling channel top.

Conservative traders should wait for the stock to either return to the channel top and demonstrate resistance, or break the bottom of the channel and attempt to climb back up, which will be rejected, before risking a short position.

Moderate traders would also wait for a return to the channel top or break below a return move, to reduce exposure, not necessarily for added confirmation.

Aggressive traders could short at will, according to a trading plan that fits their needs. Here’s an example:

Author’s Note: This is just a trade sample. The analysis is in the body of the post. If you did not read and understand it, do NOT trade. If you’re afraid to lose your money, do NOT trade. We do not know what the future holds. This is merely an analysis based on historical statistics, according to our interpretation. We could be wrong. Even if our analysis is right according to the principles of technical analysis, it merely seeks to determine likelihood, and the same outcome does not happen on an individual basis, only a statistical one. That’s why it’s imperative to manage your losses and entering trades whose potential rewards justify the risk. As the name implies, this is just a sample. Feel free to tweak it according to your timing, budget and temperament. Until you learn how to do that, follow our samples but for the purpose of learning, not profit, or you’ll end up with neither. Guaranteed, nor your money back.